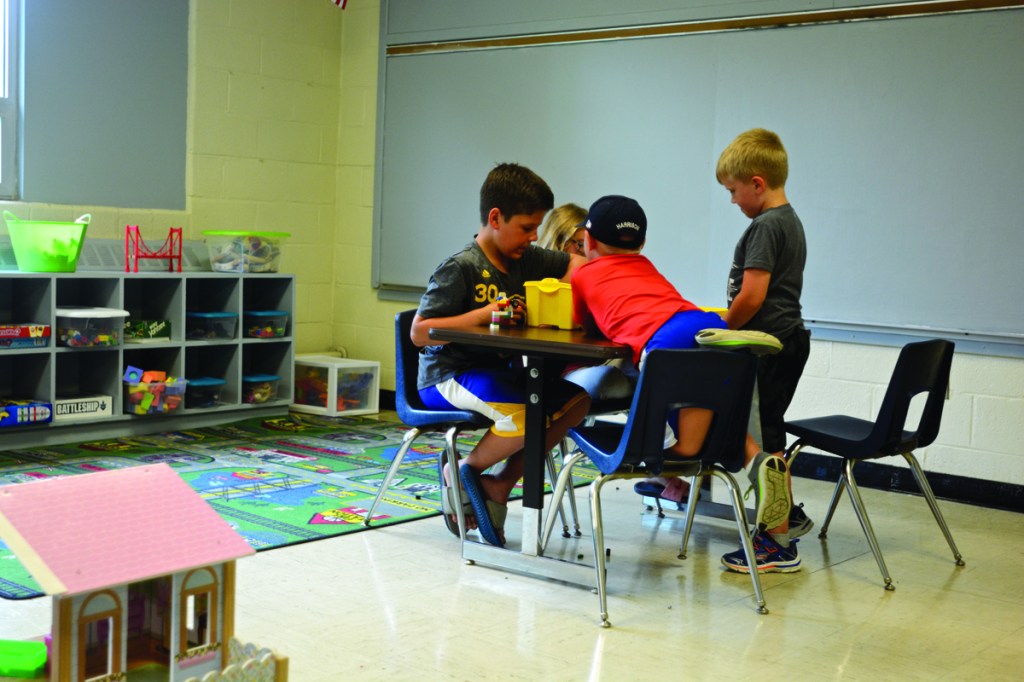 This fall, the large, brick building at 250 N. Main St. is returning to its roots as an elementary school, except this time, with a twist.

The Christian-based Grace Bible Academy is offering a summer child care program and is accepting kindergarten enrollment for the fall for its elementary school.

Brandon Pence, executive director at the academy, said throughout the summer, students follow weekly lesson plans and take a trip through the Bible starting with creation, Adam and Eve, Cain and Abel, going through to Moses, Noah’s Ark, the resurrection and more. In addition to Bible lessons, students also have time for active play, arts and crafts, music and other activities. The summer program began mid-June and continues until school starts, operating Monday through Friday from 6 a.m. to 6 p.m.

“We try to make it as exciting as a summer we can,” Pence said.

In the fall, Pence said the academy would offer a quality education with a Biblical world view as its foundation. He said they would also use various approaches that may differ from public schools such as a phonetic approach to reading to help children learn how to sound and group letters and spiral sequences in which students continuously revisit concepts during new lessons.

Pence said he had had the help and guidance from Grace Bible Church’s senior pastor, Lee Cruse. Cruse was a principal at the former Fannie Bush Elementary School which was housed in the same building the academy currently uses.

Tuition for the elementary school is $100 weekly or $400 monthly, with aftercare available for $10 a day or $50 a week. Tuition costs include breakfast and lunch. There is a $100 registration fee and $125 book fee due at registration. Parents can print out the enrollment packet online and drop it off at Grace Bible Church during of 9 a.m. to 2 p.m. Monday through Friday.

Pence said the afters chool program would offer homework help, active and quiet play opportunities and a loving atmosphere for students to unwind after school and have fun.

Pence said he felt called to open the academy.

“It has always been something that’s been on my heart to help kids and families,” Pence said.

Pence said the academy would also have a heavy focus on the Bible.

Even though the academy is in its infancy, Pence said he has high hopes.

“We at least want to go through fourth or fifth grade,” he said. “Well, actually, we hope to continue through high school.”

Pence said the plan — if there’s not enough interest to add new grades this year — is to add classes every school year to grow with its first batch of students. So, next year, Pence said Grace Bible Academy would offer kindergarten and first grade with hopes of each year, adding grade levels until at least fourth grade.

In the elementary school classes, students will focus primarily on reading and math, and will also use the Christian-based Abeka curriculum. However, they will also have various social studies, science, handwriting and bible lesson components. Pence said there would also be art, music and physical education classes.

Pence said in public school students could be taught views that are in “direct opposition” with the Bible.

At Grace Bible Academy, Pence said he likes to remember Proverbs 22:6: “Train up a child in the way he should go, and when he is old, he will not depart from it.” Pence said Grace Bible Academy is the perfect opportunity for parents to continue their children’s learning of the Christian world view when kids are not at home.

“We just feel like we need to provide an opportunity where (students) can be in a loving Christian environment that they can at least be exposed to what God’s word says and reinforce what parents are trying to maybe teach at home,” Pence said.

Pence said he hopes to partner with more organizations in the community.

“I just really hope this can be a community venture,” he said.

Pence said he looks forward to finishing up the summer program and beginning the inaugural year of the Grace Bible Academy elementary school.

“We want to make sure that overall this is a loving Christian environment where everyone feels welcome,” he said.