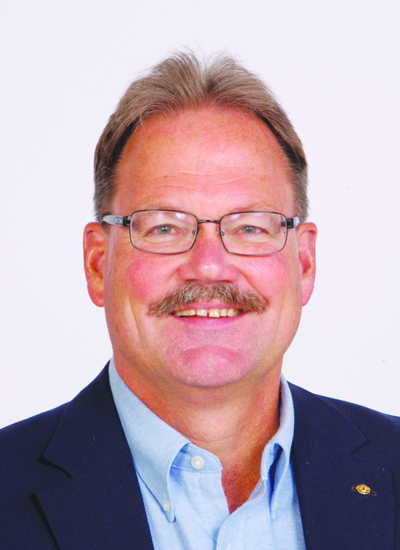 That’s what his friends and family say about him.

Johns a was a devoted husband to his wife, Lisa, and a loving father to his daughter, Meredith Johns Hall. Johns grew up in Maysville and Winchester, and graduated from George Rogers Clark High School.

He was a best friend, member of First Christian Church, a Toastmaster, coach, an avid golfer, the voice of the GRC Cardinals, an emcee, freelance speaker, trainer, internal auditor and much more.

Johns’ friend, Charlene Creager, said he valued his family; he appreciated honesty and integrity, and he valued people on an individual basis, too.

Creager said Johns was a gregarious, outgoing guy who loved to celebrate life — and perhaps, most importantly, he showed up.

“He was sunshine,” his friend from church, Shawna Worthington Mitchell, commented on Facebook.

Among many other feats, Johns dedicated his time to making Winchester better. He was active in the community and was on numerous boards and belonged to various organizations. He was on the board at Hospice East and also worked with Clark County Community Services.

“His long service (at Clark County Community Services) benefitted so many people that never knew Graham and that he never knew,” City Commissioner Shannon Cox said during the city commission meeting Thursday morning. “He was a great asset to that program over there.”

Johns served on the planning commission before being appointed to the Main Street Winchester Board of Directors, eventually acting as president on the board. He and MSW had a mission and passion for preserving, restoring, enhancing and promoting Downtown Winchester for business, entertainment and living.

“He did a great many things for this community,” Winchester Mayor Ed Burtner said. “He did a tremendous job as chairman of (the Main Street Winchester board). His leadership will be greatly missed.”

And oh, how he loved downtown Winchester.

For a few years, he was downtown’s Santa Claus. He told The Sun in December he was a good fit for the role with his “big belly” and loud, jolly voice. Though the beard made it hard to breathe, he said then.

But even as Santa, Johns was recognizable, perhaps unmistakable.

He was involved in many activities and organizations around town; there weren’t many people who didn’t know Johns.

And those who did know him liked him.

As a sophomore in high school, Johns dreamed of teaching high school mathematics and coaching baseball — a dream that carried with him up until his senior year of college when he had a change of heart, opting to pursue a career as a certified public accountant instead.

He never regretted that decision, he wrote in a column for The Sun.

Johns attended Centre College, earning a bachelor’s degree in mathematics and was a member of Sigma Chi fraternity. He later went to Eastern Kentucky University for a master’s degree in business administration.

Johns worked as a CPA for 38 years and taught accounting at Midway College for two years. He worked 30 years for East Kentucky Power Cooperative in Winchester as the accounting manager, internal auditing manager and performance measurement manager.

Creager knew Johns from their jobs at EKPC; they also attended Toastmasters, a group dedicated to enhancing public speaking skills, together. In all, Creager said she had known Johns for nearly 37 years.

“He’s been a positive influence,” Creager said. “We worked well together. When I had a bad day, he would pick it up. You could depend on him.”

Many folks knew Johns as the voice of the Cardinals as he broadcasted GRC sports on local radio since 1987.

He even lived his dream of coaching, taking on coaching roles for the Winchester Little League baseball and softball program for 17 years. Johns also helped coach the GRC junior varsity softball team starting in 1997.

Johns had a passion for public speaking, too. He was a charter member and current president of the Kentucky Foothills Toastmasters Club in which members would help each other improve communication and leadership skills.

Johns was notorious for his public speeches, often traveling to businesses, professional associations, civic groups, schools and church groups to speak on various topics and conduct numerous training session, always receiving a plethora of thanks and compliments.

In 2008, he achieved the Distinguished Toastmaster (DTM) award, the highest honor bestowed by Toastmasters International. Creager said he was the first from their club to reach that honor.

Johns also won the 2006 Toastmasters District 40 Humorous Speech Contest and was runner-up in 1998.

Kevin Tudor, a Toastmaster member, knew Johns for about 15 years.

“He was the heart and soul of that club,” Tudor said.

Tudor said he considered Johns one of his best friends; the two would always talk more after Toastmasters meetings.

“This is a big loss not only for Toastmasters but Clark County and Winchester,” Tudor said. “(Johns) cared a lot about the community.”

Tudor said Johns oozed with optimism, caring about the growth of individuals as well as the community as a whole.

“Everyone liked him,” Tudor said.

In club meetings, members learned a lot about each other. They became more than just fellow club members; they became friends, Creager said. Johns was a stabilizing force of Toastmasters, she said.

Now that he’s gone, he’s left a hole in the club that will be sorely missed, she said. Creager said she lost one of her biggest supporters.

He also judged the 4-H speech contest for more than 20 years. He once wrote how impressed he was with the participants and their teachers.

He was a member of the adult choir at the First Christian Church (Disciples of Christ) of Winchester since 1982.

The Rev. Jerry Johns wrote about Graham Johns Thursday on his blog. He wrote he had gone to see Johns earlier this week before he left town. The pair would joke with each other, calling each other “cousin,” because of their shared last name, though they were of no relation, the Reverend wrote.

Rev. Johns said Graham Johns was a deacon, then an elder; he was on the board, served as chair and did a term as a trustee.

“He possessed a booming voice,” Jerry Johns wrote. “Such volume. He sang beautifully. He could act. He could preach (and very well at that). He could tell a story as well as anyone I have known. We all looked up to him. We all did. No exaggeration.”

Graham Johns also appeared in several plays at the Leeds Center for the Arts, including “Annie” as Daddy Warbucks, “Love Letters” as Andrew Makepeace Ladd III, “The Last Night of Ballyhoo” as Adolph Freitag, “Anne of Green Gables” as President of Queens Academy, and more.

He moderated many candidate forums over the years, never failing to make the candidates and the audience laugh, yet always asking the important questions — once telling candidates as a 7-year-old, he was asked to speak to a judge by himself during this parents’ divorce, so he asked candidates if they would ever conduct such meetings with children, according to a previous article in the Sun.

Those who knew Johns spoke of the enormous hole he has left behind in the various organizations in which he was involved, in the community and their hearts.