Nailed it or Failed it: Strawberry shortcake scones 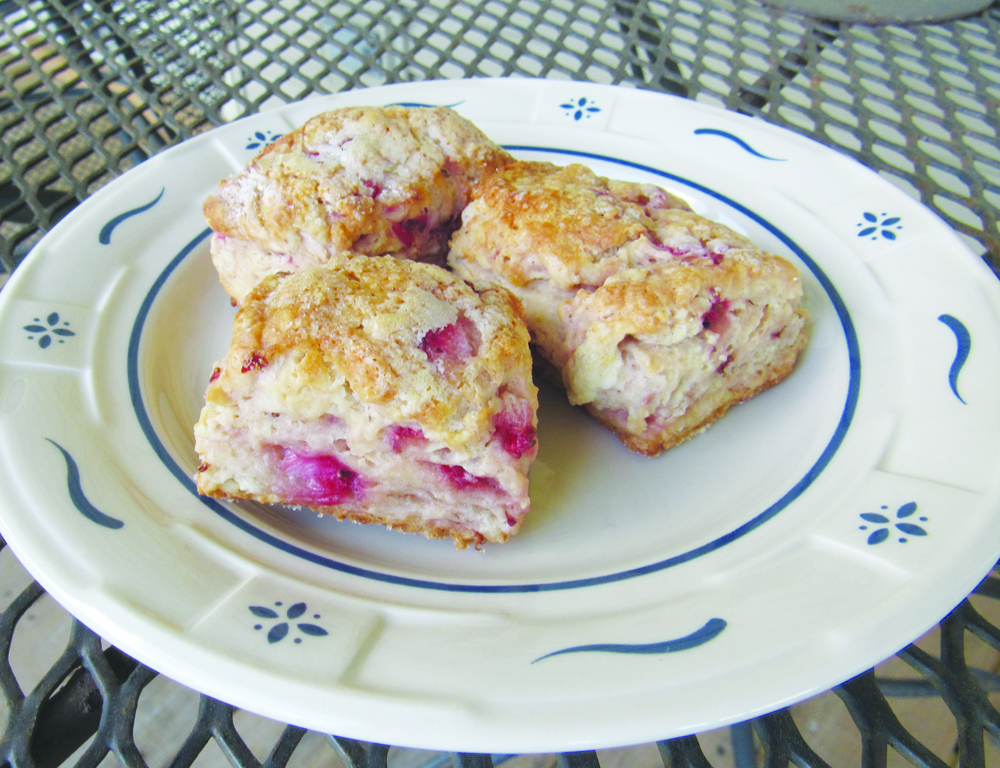 As I mentioned last week, I was taking a snack to church for my Sunday School class. I was trying to find something new to make when I found this recipe, which I’d torn out of the April 2015 issue of Better Homes and Gardens magazine.

I’ve made scones one other time (last year after purchasing peaches from The Peach Truck while it was in town). Those were delicious.

Because I’d bought a lot of strawberries at the farmers’ market early Saturday morning, I figured this would be a great way to use some of them.

Rather than chance it by making these Sunday morning, I made them Saturday evening, knowing I could heat them up for a few minutes in the microwave at church before heading into class.

I washed the berries, let them dry, then topped and chopped them. I put them in a small bowl and sprinkled with flour. Then, I put the dry ingredients in a bowl.

I didn’t want to use too much muscle trying to combine cold butter in the mixture, so I grated the cold butter on top of the dry ingredients and then used two knives to combine it.

I made a well in the center and set the bowl aside while I combined the wet ingredients. I wasn’t sure about using ricotta cheese, but a note with the recipe said it would make the scones “extra tender.”

After combining the ingredients, I floured the counter and scraped the mixture out of the bowl. The dough was pretty sticky but I gently kneaded it 12 times and it seemed to be doing what it was supposed to.

I patted out the dough, measuring to make sure it was 10 x 4 inches. Then I floured a butter knife and sliced it just like the recipe said. I placed the 12 scones on the baking sheet.

They were pretty big so I decided to cut each one in half, that way it would serve more people — even though I didn’t think all of our class members would be there the next day.

I brushed each scone with a little extra whipping cream. I didn’t have course sugar so I just sprinkled them with regular sugar. I popped them in the oven and waited.

The first time the timer sounded they weren’t even barely brown so I left them in the oven and kept checking on them every five minutes.

After about 15 minutes longer than they were supposed to bake, I decided I had to take them out of the oven or they were going to be too dry.

Before they cooled, I had to try one. I was disappointed. They didn’t taste like strawberry shortcake to me.

When the scones were cool, I placed them in a container and I was ready for the next day.

Before leaving for church Sunday morning, I tried another scone. This time I put a little bit of homemade strawberry freezer jam on it and that tasted pretty good. I loaded up the scones and the jam and we headed to church.

I popped the scones into the microwave for about 45 seconds and then headed to class.

Several people tried the scones with the jam. As far as I could tell people were actually finishing them and not just politely covering them with a napkin as they headed to the trash.

So, I guess I didn’t totally botch this recipe, but I’m not keeping it since I’ve got the peach scone recipe I made last year. I think it is much better.

I’m sure I can swap out the peaches in that recipe for strawberries, or any other berry for that matter.

Preheat oven to 400 degrees. In a small bowl toss together strawberries and 1 tablespoon flour. In a large bowl combine the 2-1/2 cups flour, sugar, baking powder and salt. Using a pastry blender, cut in butter until mixture resembles course crumbs. Make a well in center of the flour mixture and set aside.

In a medium bowl combine egg, ricotta and whipping cream. Add egg mixture all at once to flour mixture. Add strawberries. Using a fork, stir just until moistened.

Turn dough out onto a lightly floured surface. Knead dough by folding and gently pressing it for 10 to 12 strokes or until dough is nearly smooth. Pat dough into a 10×4 inch rectangle. Cut in half lengthwise and in sixths crosswise to make 12 rectangles.

Take pride in being from Kentucky