Futsal interest will be tested in Winchester 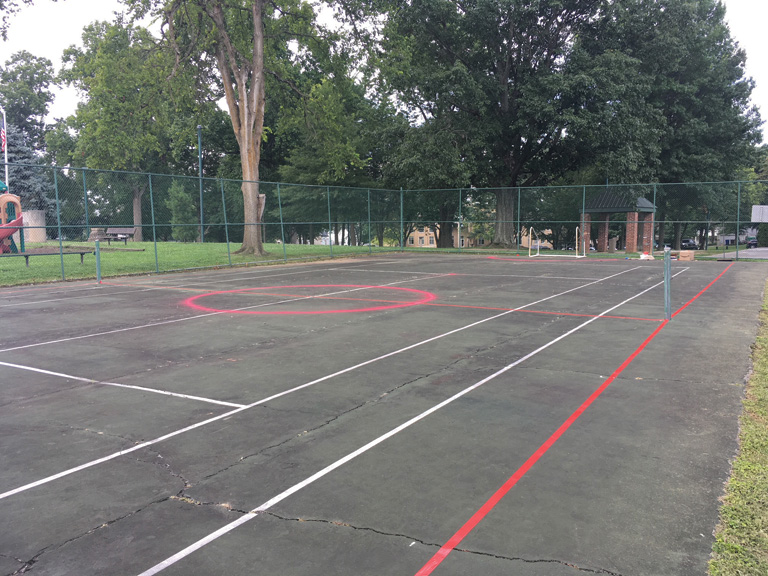 The futsal court will be available at College Park beginning from July 7-28 in hopes to make it more active in Winchester. (Photo submitted)

Futsal will be returning to Winchester from July 7-28 and may be here to stay.

WYSL and Winchester Parks and Recreation are now in a partnership and will create a futsal court on one of the existing tennis courts at College Park.

Futsal is a modified form of soccer with normally five players on each team and on a smaller field.

The surface, ball, and rules together are in favor of ball control and easier passes in smaller spaces.

WYSL board member Rob Jeffries said bringing futsal to Winchester would be a great idea for the community.

“There has been a lot of people wanting to do quick pick up games in the community,” he said. “Coaches have talked about it, so I thought this would be a great opportunity for the young and old folks. We see basketball courts in our communities and you can call your friends to meet up and play games. It is harder to do that for soccer. I had seen that futsal was trending in the U.S. I thought it would be interesting to see how it would be to make a pop-up court and see how it it is perceived. The idea to get a permanent futsal court is up for grabs.”

Jeffries is confident futsal will stick around in Winchester for longer than people may think.

“I think it has a chance to be very successful,” he said. “I have called the parks and recreation director at Owensboro and said they did the same thing. They were eventually able to pave one of the tennis courts. She said it was used more than the actual tennis courts themselves. There is two courts in Lexington already and they are well perceived in the community. Every year, soccer is growing. Every spring and fall, we get more and more kids and this will allow them to do it between seasons. They will still be getting their exercise as well as preparing for the next season. I think it will be well perceived here in Winchester as well.”

Jeffries said there are tournaments that Owensboro hosts and hopes to bring the same result to Winchester.

“The idea is to start out as a pop-up and do more in the future if it is successful. We want to see if the community is interested, and for now, it is just for fun. It is giving the community a way to have pick-up games of soccer and will make more use of the courts. They are in rough shape and used, but not as much as they could be. Rather than seeing them empty, we should get the community involved more. It will be interesting to see how it goes.”

Jeffries said the community makes trips to other communities to play, but wants something to be more closer to home for them.

Jeffries hopes the goal of bringing futsal to Winchester will help expand the game in the community.

“One goal would be to make it more accessible,” he said. “I want to help make it more accessible to our community. I did not get to grow up playing soccer much because of the other more popular sports and it was not as accessible as it is today. We want the community to improve in the skill. My kids play recreation every spring and fall and this will give them something to do between the seasons to improve.”