Nailed It or Failed It: An onion cornbread treat 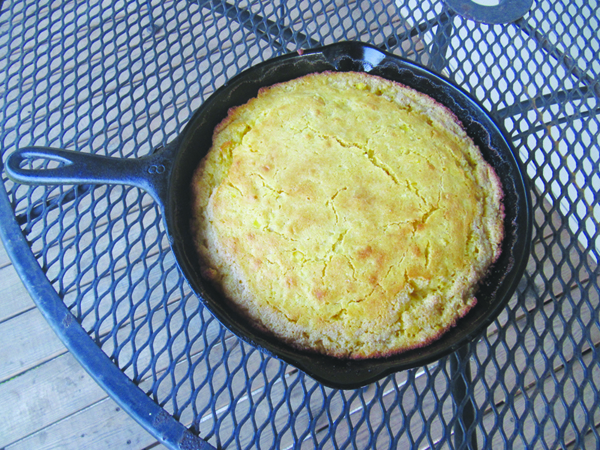 A few weeks ago, one of the groups at George Rogers Clark High School — either the band or FFA — was selling vidalia onions, and I purchased a bag to help support them.

I know, I know — when I got home Brad just looked at me because he preaches we should eat purple onions because the darker the vegetable, the better it is for you.

But it was a good cause, and I like to cook with vidalias.

After a few days of those onions hanging out in the basement, I remembered I had some new Vidalia onion recipes in my vegetable folder, so I started going through the folder to find them.

Now it didn’t take too long to go through the vegetable folder since I’m not a vegetable lover and don’t clip too many of those kinds of recipes.

I found a couple of recipes with vidalia in the title and pulled them out of the folder. I pondered which one I would make first. We were going to have pork over the weekend, and I figured today’s recipe for vidalia onion cornbread would be a perfect accompaniment.

Before I headed to the grocery on Saturday morning, I read the recipe, checked my cupboard and added self-rising yellow corn meal to the list.

While at the store, it took me a little bit to spot the yellow self-rising kind.

The package said “Hot Rise,” and I guessed that was what I needed.

While the pork was in the slow cooker, it was time to start thinking about supper.

I pulled my cast iron skillets out and measured them.

Not one of them was 12 inches in diameter.

I had two eight-inch ones and a four inch one. I figured eight plus four equals 12, so the two of them would do.

I chopped the onion, which to my surprise didn’t make me tear up.

I’d already thawed some corn that we’d frozen from last year’s garden and was ready to get started.

I turned on the oven, placed butter in both skillets and put them in the oven to heat.

Instead of using a small skillet to cook the onion and corn, I used a two-quart pan.

While those veggies were cooking I put the dry ingredients together in a large bowl and put the wet ingredients in a small bowl.

It took a bit longer for the onion to get tender since I’d used a pan instead of a skillet but when it was ready, I mixed the dry and wet ingredients and then dumped in the veggies.

I mixed everything up and removed the skillets from the oven.

Oops, the butter had browned way too much, and I debated whether to go ahead and keep baking or dump the butter and start over.

After looking at the butter, I opted for the second option. I was afraid the butter was on the verge of being burned.

I poured the butter out and since the skillets were still hot, added more butter and it melted quickly.

I poured the batter into the skillets and placed them back in the oven.

I tested the center of the cornbread with a toothpick after 25 minutes and it was ready.

I opened the oven so the cornbread wouldn’t cook more, but would stay warm, and began getting everything else on the table.

I sliced the cornbread and just put the whole skillet on a hot pad on the table so we could serve ourselves.

Now, Brad isn’t a big bread eater, and so I looked at him and said, “you have to try it, especially since we have two skillets of it.”

After he prayed, we both buttered a piece. Brad buttered a small piece, and I buttered a big chunk because I love bread; as a matter of fact, by now you should know how much I love carbs so hand me the cornbread and butter. Yum, yum!

We finished filling our plates, and I dug into the cornbread.

I thought it was delicious.

It was moist but not mushy, and I liked the corn kernels in it.

I could taste the onion, but it wasn’t overpowering — just right.

I held myself back and only ate one piece and put the rest in baggies — four pieces went into sandwich bags so Brad could take some to my taste testers at his office, and the rest into one large bag for me to have with meals the next few nights.

By now you know this recipe was a hit with me.

Brad’s co-workers had mixed feelings; Donna wasn’t crazy about it but commented that she isn’t crazy about cornbread —  just like Brad — but Tina was a different story, she loved it, but then again Tina is way too kind and always says she loves whatever Brad shares with her.

Others that tasted the cornbread sided with Tina.

With Tina’s and my blessing, I nailed this recipe, and it will be added to my self-made cookbook.

And the leftovers were just as good heated up the next few nights, especially with butter slathered on it.

2. In a small skillet, melt 1/2 cup butter over medium heat. Add onion and corn, and cook 6-8 minutes, or until soft; set aside.

6. Pour batter over melted butter in preheated skillet. Return to oven and bake 25 to 30 minutes until golden or until a tester inserted in center comes out clean.