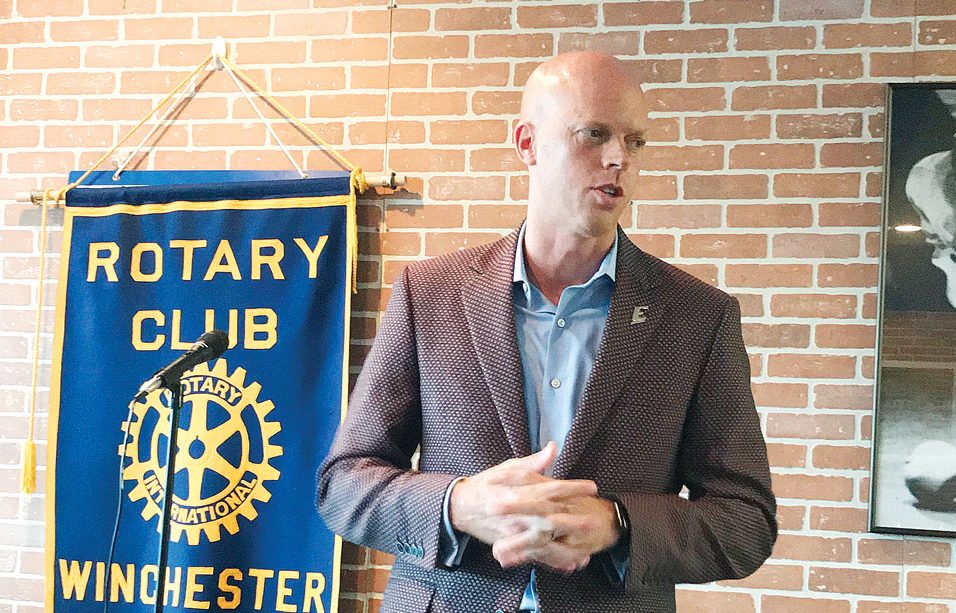 A.W. Hamilton, the first-year men’s basketball coach at Eastern Kentucky University, talks with the Winchester Rotary Club about how his basketball career has brought him home and the importance of setting goals. (Photo by Michael Caldwell)

For A.W. Hamilton, taking the reins of the men’s basketball program at Eastern Kentucky University was basically just coming home.

It was also the culmination of a journey that began two decades before with powerful lessons from his grandfather and a life-long commitment to setting goals and doing everything possible to achieve them.

Hamilton, a Georgetown native who was hired in March, took a quick break from summer practices Friday to talk to the Winchester Rotary Club about the path that has brought him full circle and his desire to make EKU’s hoops program a family destination for all of Central Kentucky.

That may sound overly confident for a man in his first Div. I head coaching job, but any bravado is firmly rooted in the work Hamilton has put in to get to this point.

In the summer after eighth grade, the skinny kid from Scott County decided he wanted to be the best basketball player he could possibly become. That meant training in Florence, Ala. with his grandfather, a former Div. I player at Miami of Ohio.

Even after making the commitment, Hamilton still had second thoughts.

“He pulls in the driveway and I look at my dad and I was like, ‘Listen dad, you know, I don’t think I can do this,’” Hamilton recalled saying.

“My dad was like, ‘listen son you are going to learn a lot in your young life, but the thing I am going to tell you is that you have to always dream big and you have to go after your dreams.’”

The mental challenges were just as important. Hamilton’s grandfather talked to him about setting goals.

Hamilton went home and started going to every basketball camp he could find, but his parents made sure he knew there were no free rides. So he bought a push lawnmower, undercut his competition by $10 and started paying for his own way.

Hamilton went back to Alabama and again his grandfather insisted he articulate his goals.

Then came the work to achieve those goals.

Make the varsity team as a freshman? Check.

Start as a sophomore? Check.

Become one of the best players in the state? Check. Hamilton was named first-team all-state.

Get a Div. I scholarship? Not so fast.

Hamilton was singularly focused on basketball, obsessed some might say.

That meant that his work in the classroom suffered. The NCAA ruled he didn’t have the grades he needed.

But dreams don’t end at the first sign of adversity.

Hamilton ended up at Hargrave Military Academy in Chatham, Virginia, where he was the starting point guard for Kevin Keatts during the 1999-2000 season, leading the Tigers to a 23-3 record and a No. 2 national ranking.

His performance at the prep school grabbed the attention of Div. I coaches including Dave Odom of Wake Forest. It wasn’t long before Hamilton signed a full scholarship to play there in the ACC, always one of the best conferences in the country.

But again, adversity impacts everyone’s life at one point or another.

After a year and a half at Wake Forest, Hamilton transferred to Marshall University in Huntington, West Virginia.

The fresh start was exactly what he needed. He was a three-year captain for the Thundering Herd. He led the team in assists, steals and minutes played all three seasons and ranks in the top 10 in school history in assists and in the top 20 in steals.

Hamilton earned a B.S. in communications from Marshall in 2005.

Along the way, he also revised his goals. He now knew he wanted to be a Div. I head coach.

Following his playing days in Huntington, Hamilton served as Marshall’s graduate assistant for a season.

He kept the clock. He mopped the floors. He did the laundry.

“I did everything I could to show them I really wanted to be a coach.”

Then his old coach Keatts called him with an offer he couldn’t pass up to return to Hargrave.

When Keatts left for an assistant coaching job at Louisville, Hamilton — at the ripe old age of 30 — was given the opportunity to take over the successful program.

He made it even better.

From 2011 to 2017, Hargrave reached unprecedented levels of success, compiling a record of 237-22, averaging 40 wins per season and winning the 2016 National Prep Championship.

Still, that goal he had set — to be Div. I college basketball coach — had yet to be achieved.

Hamilton spent last season as an assistant coach under Keatts at North Carolina State University. He helped lead the Wolfpack to the NCAA Tournament with a 21-12 record, including wins over No. 2 Arizona, No. 2 Duke and No. 10 North Carolina.

But when the EKU job opened up, Hamilton said he felt he had to apply.

The rest is history.

“I couldn’t believe it, but I think back through my life, and I was going in to my freshman year, my dad pulled me aside and said, ‘Listen son, I know this is going to be tough but just dream big and attack your dreams and you can do it.’ I think back through my life that is what I have done. I am fortunate I am coaching at Eastern Kentucky. I feel like I am coaching the Los Angeles Lakers. I love my team. … This is the best state in America. I am the luckiest guy in America.”

Hamilton said his focus at EKU will be on building a strong program, a family environment and embracing fans.

The team will have open practices this summer. Hamilton wants people to have fun at the games and make it can’t-miss entertainment.

The Colonels have seven returners and six new players. A key player is Nick Mayo, who is 451 points way from becoming EKU’s all-time leading scorer.

So what style will EKU play this season?

They will play for each other and play basketball the right way, Hamilton said.

EKU Athletics contributed to this report.