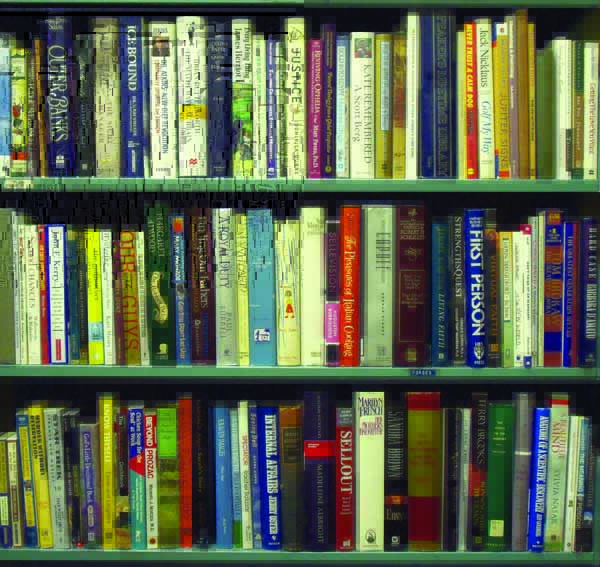 It is a gem, small, sparkling, and enchanting, and it is all about joy created when a mother and her daughters inspire each other.

That’s wonderfully typified by a needlepoint piece Barbara Maynard copied from a Christmas card showing a family of squirrels and their bird buddies decorating a winter tree with garlands of cross-stitch thread, cloth ribbons and candles.

It’s an exquisite meta-illustration, made from the materials imaged. Besides that, it’s pure beautiful fun. Come in and spend a few minutes contemplating it. The image will make you glad; the winter scene will cool your July-fried soul.

This exhibit gives you the space and cool colors to relax and enjoy the day.

On the table in front of the exhibit is Maryett’s narrative about the works included and the story of how her mother started doing needlework in order to quit smoking. Truly, one of the best benefits, ever, of a tobacco-free life.

There’s also a copy of a book entitled “A Sampler,” edited by Jeff Gyula, which is a collection of Barbara Maynard’s needlework.

Take some time to look through that book. Along with some of the most exuberant and mirthful pictures you’ve ever seen, it features kneelers and altar rugs that Father Parker, parish priest at the Church of the Ascension in West Park, New York, asked Barbara to make. It also features a wall hanging of Christ the Savior he commissioned when he moved on to a new, more modern church in Hurley, new York.

Please keep the book on the table in the reference are so it does not get lost in the library.

In a basket on the middle reference window, there’s a pillow worked with the image of a lively young bird. I’ve adopted that bird as my role model for July. Come in and take a look at Maryett’s show and you’ll leave feeling as bright and lively.

Other programs this week?

— Tuesday at 10 a.m., Internet 2. Learn to search the web and webpages efficiently and how to copy web information and pictures and paste them in a Word document.

You must have basic computer experience to take this class.

— Wednesday at 2 p.m., Kentucky Picture Show presents a 2018 film about country music super-star Liam Page who left his bride, Josie, at the altar choosing fame and fortune instead. However, Liam never got over Josie, his one true love, nor did he ever forget his Southern roots in the small community where he was born and raised. Rated PG.

— Thursday from 6-8 p.m., Basic Origami. Reference Librarian Brad Allard will show you how to do origami. He’ll describe the process step-by-step. Traditional origami papers will be provided. This class is free and open to the public but it is limited to eight, so you must register to attend.

— Saturday from 10 a.m. until 4 p.m., Outside the Lines adult coloring. Another way to make a groovy July day groovier.

As rhythm guitarist Frank Schaap used to say: “Get out of your rut and into a groove.” At the library.