Studio One dancers to showcase talent on ‘Little Big Shots 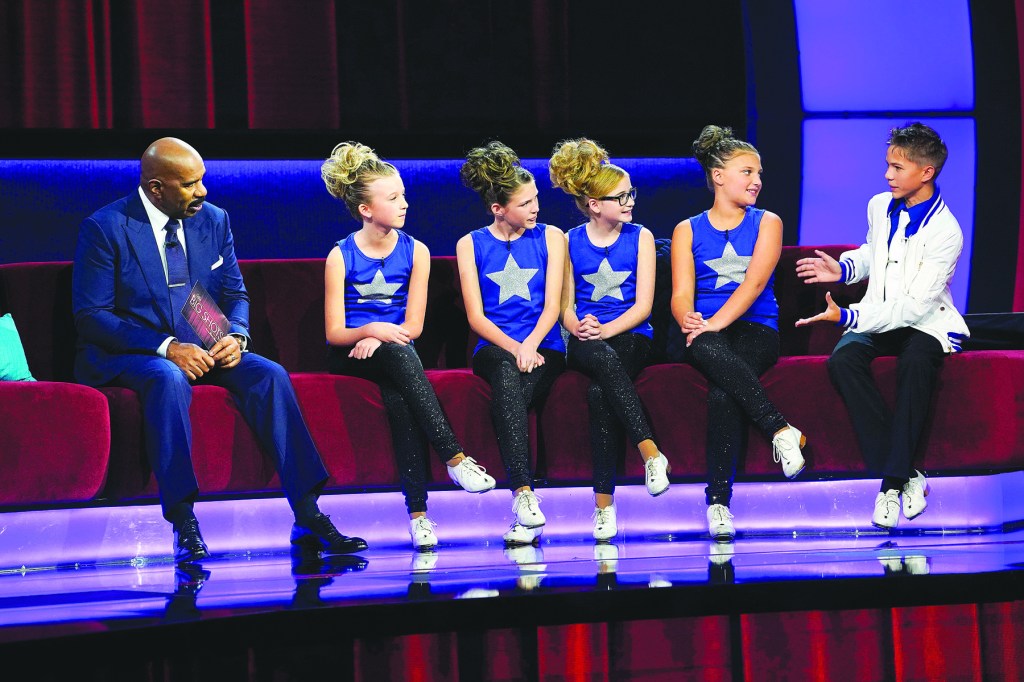 This week, five adolescents from a Clark County dance studio will showcase their talents to a worldwide audience.

Star Power, a clogging team from Winchester’s Studio One, filmed a performance on “Little Big Shots,” NBC’s pint-sized variety show that Steve Harvey hosts, in October. The finale episode is set to air Thursday, and the team is celebrating with a party at Woody’s Bar and Grill from 5 to 9 p.m.

“They’re going to make Winchester proud when everyone watches them Thursday,” Kelly Fithen, coach and Studio One co-owner, said.

The episode will begin at 8 p.m. Star Power is one of many acts performing on Thursday’s episode.

Executives with the show stumbled upon Star Power on YouTube, watching a video of a routine the team performed at a competition. They contacted Fithen to ask if the team would be interested in performing on the show.

“I guess ‘Little Big Shots’ goes out and tries to find new talent, scout out new kids for their show,” Fithen said. “They came across Star Power and liked what they saw.”

Fithen said executives tracked the team down. Fithen said she knew she had to make it happen because of the opportunity it offered the team.

“It was very much an honor that they found us,” she said. “It’s amazing, of all the people they could have selected, they found us from Winchester, Kentucky.”

Long said clogging is a style of dance where the dancers mainly stay on the balls of their feet and use the heel to keep rhythm.

The team spent a week in Los Angeles rehearsing and filming the show which was set in front of a live audience. Throughout the week, the team also had to keep up with their schoolwork but made sure to explore the big city.

“It was an awesome opportunity for them,” Fithen said. “…Not only figuring out what it was like to be on a TV show, what all it takes, but then they also got to tour the city. So, it was pretty cool.”

Each team member agreed the trip was one they will never forget.

Johnson said her favorite part was meeting all the other performers and people on set. She said she wasn’t as nervous about performing as she was talking with Steve Harvey.

James said she enjoyed meeting people from Israel and other people from different cultural backgrounds. The team said they all keep in touch with people they met on the show.

Though, James said she wasn’t nervous.

“I was pretty normal,” she said.

There were also a lot of firsts on the trip — first time visiting California, first flights, first time meeting a celebrity and first time being on a TV show.

“Not only did they get to do something that they love, which is dancing, but they also just had all these opportunities that so many other people never get,” Fithen said. “It was just amazing.”

Long said it was his first time flying.

“I think it’s cool that we came from Kentucky and got to go all the way over to California,” he said. “One of my favorite parts was the flight because I had never flown, and it was really exciting.”

Long said he was nervous on stage because he was meeting a celebrity, but clogging for the audience was no different than performing for a competition, he said.

“It was nice getting a standing ovation,” Long said.

Abney said she also enjoyed the flight and meeting Harvey, but the beach was a bonus.

Long travels from Lewis County — about a 90 minute drive — for every practice. The rest of the team lives locally.

“All of these dancers have been here for several years,” Fithen said. “We very much are a family atmosphere here. It’s not just a random team. You get to know these people.”

The team has been together for four years, winning nationals and continuing to compete in advanced categories.

“We’re all very, very close, and we dance well together,” Johnson said. “So, we don’t look like four or five soloists competing in line with the music. We look like one team competing.”

Outside of the studio, the team also spends a significant amount of time together.

“I think that helps when they have the bonds of friendship outside the studio and then they bring it in and helps them mold together even more,” Fithen said.

The team practiced a new routine in preparation for the show.

“That was one of my favorite dances that we’ve ever done,” Johnson said.

Fithen said routines for competitions have specific criteria and rules that teams have to abide by for different categories.

“For this, our only rule was to entertain and have fun,” she said.

There were no restrictions besides a time limit, and the NBC officials had to approve the song, Fithen said.

Long said the new routine helped him fall out of his shell as the “shy, stiff” dancer.

Star Power practiced nearly every day for three weeks leading up to the week of filming.

Each member talked about their excitement for sharing their passion with the world at such a young age.

“Not many people get to show what they do to the whole world,” Johnson said.

Not to mention, it’s a big feat for a team from a small town, they said.

Now, the team is focusing on just getting better and gearing up for competition season. But in the meantime, Star Power is celebrating their successes. The team said they hope everyone tunes in to Thursday’s episode.

“I could not be more proud of these five dancers,” Fithen said. “…They have represented Studio One amazingly, and I’m very proud that these five are a part of the Studio One family, and I cannot wait for everyone to watch them Thursday so they can see what these five can do.”