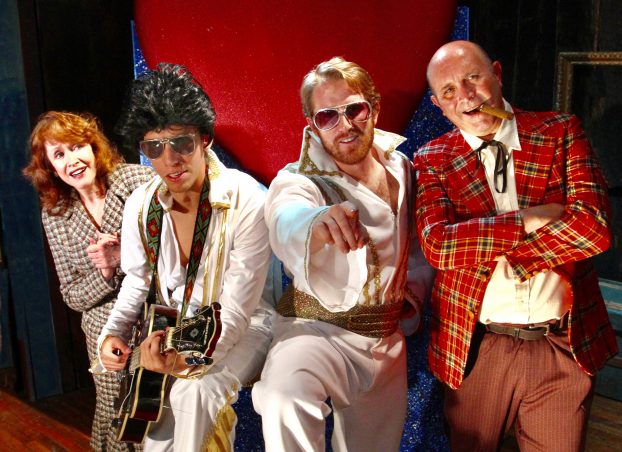 Winchester native Dalton Graves is in his second summer as a paid actor at Pioneer Playhouse in Danville. (Photo by Joan Graves)

Even as a kid, Dalton Graves always loved being the center of attention.

He loved playing pretend, so naturally, he was drawn to acting.

“Acting gave me an outlet for creativity and my desire for attention in a positive way,” he said.

Then, he would perform for his friends and family. Now, he still does the same — except he’s also performing for strangers, and he’s getting paid for it.

Graves studied theater and film at Georgetown College, graduating in 2017. He is also a George Rogers Clark High School graduate.

The Winchester native is making a name for himself as he is spending his second summer as an actor with Pioneer Playhouse in Danville, the oldest outdoor theatre in Kentucky.

Graves, 23, started acting in elementary school. He would perform at Leeds Center for the Arts, in school productions — just about anywhere he could. Over time, his love for acting developed into a full-fledged passion, and now, a career.

There he has acted in “Death By Darkness,” “Guarded,” “Elvis Has Left the Building,” “Hound of the Baskervilles,” and more.

The actors begin work right away when the summer starts, immediately auditioning for the first show, rehearsing and building sets. The cycle doesn’t stop until the season ends, Graves said.

“We will rehearse one show during the day and perform another at night,” he said. “It can be stressful but really fun.”

On closing nights for a performance, Graves said the actors have what they call a “strike night” in which they stay up all night and tear down the previous show’s set and start building the next set.

Because of the fast nature, the job can be challenging. Graves said he has to make sure he compartmentalizes his characters instead of blending his character choices for different shows.

It’s important to keep everything separate, he said. Though, no matter how hard it gets, he wouldn’t change a thing.

“The worst day in theatre is better than the best day I could have in any other job,” Graves said.

Graves said he knew he needed a career with a creative outlet. He had a taste of the corporate world and didn’t like it.

“The corporate world is not the place for me,” he said. “I was good at the job, but I didn’t feel like I was living very much. It wasn’t fulfilling.”

Outside of acting, Graves said he enjoys playing video games, watching movies and spending time with his family. He is the son of Steve and Joan Graves of Winchester.

“I definitely wouldn’t be anywhere without my family,” he said. “They never asked, ‘What else do you want to do?’ My parents never did that to me. They supported me. They were always the ones to push me. They told me to commit to it. I appreciated that push.”

Graves said his dream role would be to play a detective in either a movie or on a TV show. He and his mother have a shared affinity for crime shows and documentaries.

“We enjoy solving crimes,” he said.

Graves said he used to want to act in film and television more than theatre, but after working on stage professionally, he loves it all equally.

“I would be happy just being in the entertainment industry in some way,” he said.

Though Kentucky is his home, it’s not the place he will stay, Graves said.

“In the end, if I want to make a huge impact and have acting be the main thing I do, Kentucky is not the place for me,” he said.

Graves said his favorite part about his career is being surrounded by like-minded people.

He said this is the first time being around people who have the same passion as he does.

In downtime, the actors share their dreams with one another and pass along connections and opportunities.

Graves said he loves meeting people after a show, too. After every show, the cast forms a “receiving line” in which they line up by the exit and meet members of the audience.

“You never know what comes through the line, a little kid shaking your hand saying you did a good job, just knowing what you’re doing is more than yourself,” he said.

Graves said it reminds him of watching productions at GRC when he was younger.

“Those kids would never know that the ‘Fiddler on the Roof’ made me realize that (acting was) something I want to do,” he said. “I hope there’s a kid thinking the same thing.”

Graves said the audition process for acting companies was nerve-wracking. He and about 300 other actors traveled to Greenville, North Carolina, to audition. Graves arrived at 6 a.m. but didn’t audition until around 3 p.m., he said. The companies would call in groups of 20, and then each person had a few minutes to say their name, say their number and perform a short monologue — all with the hope of leaving a lasting impression.

The six companies would then select actors for callbacks; Graves had two, but not everyone was as lucky.

Graves said he hopes aspiring actors don’t give up if they are rejected.

“You’re not going to be able to make it unless you can take hit after hit,” he said. “If you let that affect you so much, it will tear you apart.”

Graves said he holds on to a piece of advice a fellow actor gave him: “If you want to be in the industry, don’t have a backup plan.”

“I’m going to refuse to not let it happen,” Graves said. “I will be in the industry in some way. I don’t have a backup plan.