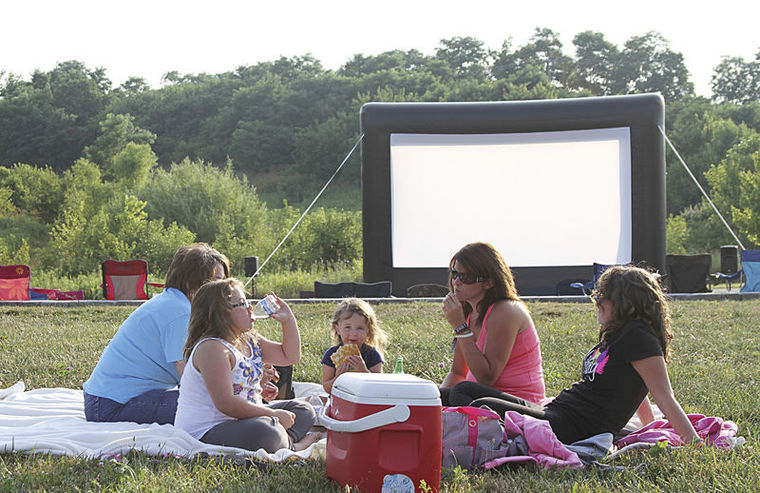 Children and adults wait for the show to begin at a previous Moonlight Movie Night event. (Sun file photo)

This Friday, Clark Countians can travel to a galaxy far, far away.

BCTC plans to kick off the events with a showing of “Star Wars Episode VIII: The Last Jedi,” following a performance from Dancer’s Pointe at 7 p.m.

“The Greatest Showman” will be shown July 20 with a Winchester’s Voice singing competition beginning at 6 p.m.

The event will wrap up with Readifest at 7 p.m. July 27 paired with a showing of “A Wrinkle in Time.” Readifest includes free school supplies for students.

“So, we’re doing something big every night,” Manley said. “The movies get bigger every year.”

Admission is free, but patrons can purchase food — including popcorn, snow cones, candy and more — as well as memorabilia among the various vendors that plan to set up.

Food trucks — such as Bell On Wheels LLC and Sibbie’s Street Sweets — will also be on site.

Proceeds made from the event go back to students, programs and equipment at the local campus, Manley said.

There will also be a silent auction, opportunities to win door prizes, inflatable slides and more. Manley said he even purchased a giant slingshot to sling T-shirts into the audience. At the movie nights, BCTC will also giveaway gift cards to Malone’s, MOD Pizza, Logan’s Roadhouse and more. Other prizes include trips to the Cincinnati Zoo, a Cincinnati Reds game, a Lexington Legends game, Kings Island and more.

For Friday’s “Star Wars” movie, Manley said he encourages people to come in costume, and attendees may even receive a free lightsaber.

Movie nights began as a way to increase awareness of Winchester’s campus as well as a way to fundraise for the college and to give back to the community.

“We started off small that first year, and now it has grown so much that last year for Readifest, we had about 2,000 people on site,” he said. “So I’m excited for this year.”