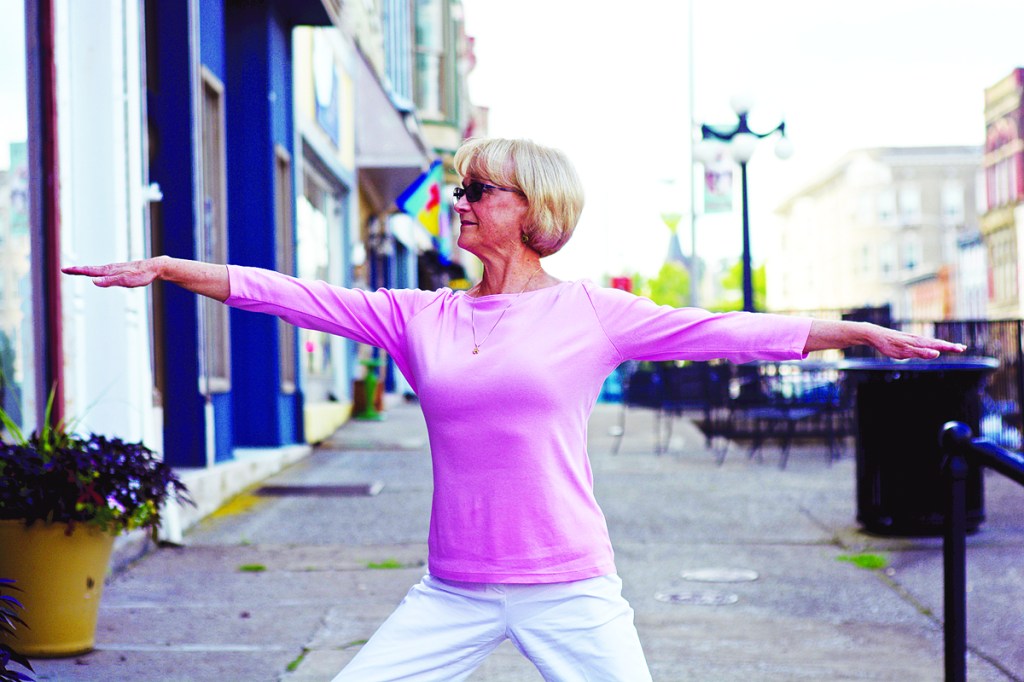 Kathy Howard, a retired principal at Hannah McClure Elementay, is now a yoga instructor. She demonstrates a variation of "Warrior Pose."

Kathy Howard may have retired after 41 years of teaching and working as an administrator — having spent nearly half of her career as a principal at the former Hannah McClure Elementary School — but she’s never stopped teaching.

Howard has now been teaching yoga for about four years.

The Florida native moved to Kentucky when she married her husband. After her second child was about 3-years-old, she decided she wanted to go into teaching.

“I became an eternal student traveling back and forth from Harlan, Kentucky, to Barbourville, Kentucky,” Howard said about her years studying at Union College.

She went on to get bachelor’s and master’s degrees and eventually her Rank I.

After about eight years of teaching, Howard made the switch to administration and finished her career at Hannah McClure Elementary in Winchester.

She said her husband’s family was from the area.

“I felt like we were coming back home,” Howard said.

Howard made the decision to retire when the board of education decided to consolidate the district’s schools.

She knew one thing for sure going into retirement.

“I decided that I didn’t want to become a couch potato,” Howard said.

Howard said she saw an advertisement at Erin Smith’s the Om Place. Smith was offering a yoga teacher training class. Howard had already been going to yoga classes nearly once a week for about 12 years, and decided, “Why not?”

“In June, I retired from my public school position, and also graduated from my yoga teacher training,” she said.

As she was training to be a yoga instructor, her staff at Hannah McClure would volunteer to be yoga students after work hours during Howard’s last few months as a principal.

“They were my guinea pigs, but they were very brave,” she said.

Since becoming an instructor, Howard has completed additional training with Yoga Alliance in Asheville, North Carolina, and plans to continue being an “eternal student.”

She has taught yoga with Clark County Community Education, at Emmanuel Episcopal Church and currently offers classes at the College Park Gym in conjunction with Winchester-Clark County Parks and Recreation as well as at the Clark County Public Library.

Howard said she has seen the growth of the yoga community since becoming an instructor.

“My students who come, for instance, on Thursday mornings at the library, I’ve gotten to know,” Howard said. “And they’ve gotten to know each other, learn a lot about each other. They find out they’re neighbors, some of them, they didn’t know before.”

Howard said she learns more from her students than they do from her, though. She has also learned a lot from other yoga teachers including local instructors Smith, Cindy Reed and Shannon Phelps.

Howard said there are many variations of yoga, but she focuses on “gentle yoga.” She also teaches a chair yoga class.

“So, when (people) come to a gentle yoga class with me, I suggest they listen to my cues for alignment, but not try to make it a performance,” she said. “It’s not a contest among yoga students. It’s what you are ready to do.”

Yoga is reaffirming to not only physical health but mental and spiritual health as well, Howard said.

Howard said she has also learned a lot about mindfulness while practicing yoga. She plans to take more classes on mindfulness and meditation and to learn more about alignment.

When practicing yoga, Howard said she likes to go into a flow in which she gradually moves into various poses. Whatever her yoga sequence, she also feels happier by the end, she said.

Over the four years teaching yoga, Howard said she has instructed more than 700 hours of classes.

Howard said she hopes to continue learning more about the human body; she always encourages her students to listen to their bodies.

A person can push themselves without overdoing it, Howard said. It’s critical to be gradual in progress. Yoga could be a way for people to manage pain or help people practice breathing, alignment, mindfulness or meditation, she said.

Howard said anyone could alter a pose to make it work for their needs or they can opt out of a pose if it is painful.

“Your teacher is not the boss,” she said. “You’re the boss.”

Howard said teaching yoga has been an excellent opportunity for her.

“For me, becoming a teacher made me know I needed to have my practice each day, every morning, maybe it’s 30 minutes, maybe it’s an hour or longer. Or maybe it’s shorter, 20 minutes,” she said. “When I finish practice, it’s an uplifting feeling that gives me a smile for the day.”