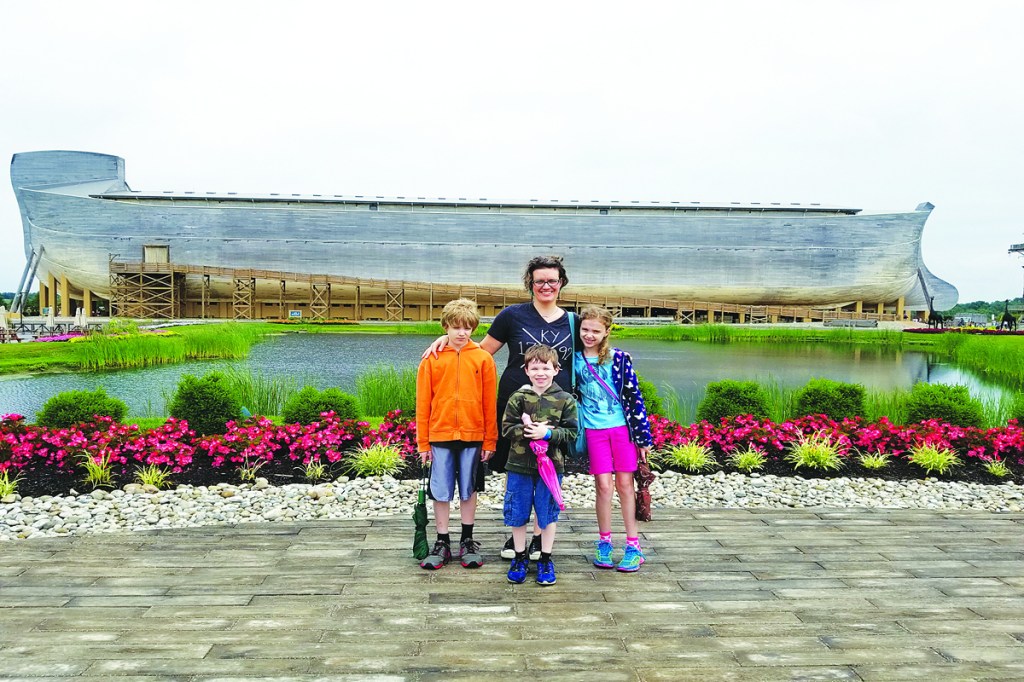 Vinae Winn poses with her three children at the Ark Encounter exhibit in Williamstown during a field trip the homeschoolers took earlier this year. (Photo submitted)

When Vinae Winn took her oldest child to the pediatrician to complete the required examination process for kindergarten more than five years ago, she received some unexpected news.

“The doctor said he wasn’t ready and I needed to either hold him back or do homeschool,” Winn said.

So, she chose the latter.

What started as an initial solution to a minor setback turned into a lifestyle. Winn discovered homeschooling was the best option for her children at the time, and she wanted to instill a core set of values unto her children — something she wanted to do without the influence of public or private schools.

“At the core of it, I wanted my children to be very grounded in biblical values and have confidence in who they are as individuals and as community members,” Winn said. “I wanted them to get their values from me first, my husband and me first, and instill and bring them up in the knowledge of God and how everything they do connects back to God. So, that’s the reason I continue to homeschool.”

Winn and her husband are from California and previously lived in Oregon. The family moved to Kentucky about four years ago.

Winn has been homeschooling her children from the beginning, starting with her oldest child and continuing on for about five years now; he is now 11. She now has two younger children, ages 6 and 8.

As a homeschool mom and teacher, Winn said she surrounds herself with support, emphasizing networking as an added key to success. Winn is a part of the local Christian Homeschool Network, and networks with the group mostly online.

Each morning, Winn said her children start with going through various subjects, memorizing facts and building a foundation. Later in the day, they dive deeper into the topics and work one-on-one. Lately, her children have been practicing skip counting and multiplication.

One of Winn’s favorite parts of teaching is akin to many other teachers’ favorite: seeing something click.

“I love seeing the connections they make,” she said.

Each day of school is different.

One of the advantages of homeschooling is the flexibility, Winn said. While the state requires a certain number of days and hours of school, Winn said she usually ends up teaching more than the required days, but the start and stop times may vary.

Growing up, Winn experienced all facets of education: public, private and homeschool. Her husband, though, was a staunch public school advocate.

“I don’t have a problem with the system, we have thought about that, but having been homeschooled, I understood a little bit better the benefits that come from it and what it would look like,” Winn said.

One significant benefit is adapting to each child’s learning technique, Winn said.

“It’s a challenge, but I have to tailor my teaching to them and figure out how they learn best,” she said.

Another benefit is individualization.

“Each child can get one-on-one time, and the children can take the amount of the time they need to learn a subject thoroughly and have the subject mastered,” Winn said.

Meeting each child’s individual needs can be a daunting task, though.

“Trying to teach my children in the way they need to be taught has probably been the most difficult thing especially when one doesn’t learn something the way another one did,” Winn said. “But it’s OK, and I have to be OK with it not looking the way I wanted it to be.”

“If I start to teach something, and they are interested, we can dive deeper into it,” she said. “We can go to museums. We do that quite a bit. We have the freedom to work around schedules and to go on field trips.”

One misconception of homeschooling is the idea that kids aren’t socializing, Winn said. Her kids socialize often, but what’s interesting, she said, is the various age gaps between the kids.

“My 11-year-old has a friend who is 16 and friends who are 8,” Winn said. “They learn to interact with people who are in a different stage, and they learn to relate to kids.”

However, teaching isn’t everything Winn thought it would be.

“I probably had dreams about my children smiling, sitting around their desks, willing to do their paperwork, but I didn’t realize how much it was going to push me out of my comfort zone, out of my boundaries and test the limits of my patience,” Winn said.

But even on the hard days, she’s reminded why she loves being a homeschool mom.

After teaching for nearly five years, Winn said she’s grown more into her role. She’s refined the curriculum, honed her focus, set her core values and adapts to changes when needed.

Winn said she has learned a lot over the years, and her biggest advice to anyone considering being a homeschool mom is to not stress about it.

“I strongly believe anyone can homeschool,” she said. “It’s not for everyone. Everyone has different styles, but any parent can teach their children. That’s all we do from the time they are born is we are constantly teaching them. You have to realize you are your child’s best teacher. You know how they work best.”

But it’s not going to be “all rainbows and unicorns,” Winn said.

As for the future, Winn said she leaves her plans open to “how the Lord leads.”

She said she hopes to continue homeschooling her children through high school graduation if that’s what her children need, perhaps still using the Classical Conversations curriculum.

Wherever the path leads her family, they’re in it together.

“Homeschool is just one part of doing life together,” Winn said.