Where in the World: One of the most noted places in Ky. 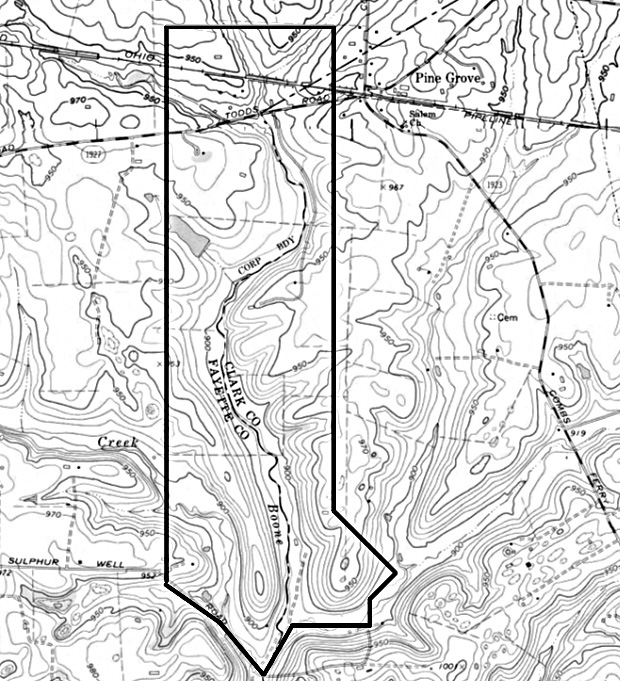 The rural landscape of Clark County is filled with scenic beauty. The rise and fall of the terrain offers numerous vistas of green hills and dales.

Where piano key development has not yet intruded, the countryside is still farmed extensively and produces an abundance of livestock and grain.

Some of our lands are as strikingly beautiful as any in the state. Particularly lovely are those farms in the western end of the county lying within the Inner Bluegrass region.

Being a resident, however, I am a biased observer. What might others think?

Here is one notable example going all the way back to 1775. At that time, there were only three settlements — Boonesborough, Harrodsburg and St. Asaphs (now Stanford).

It’s hardly a stretch to say everyone coming to Kentucky was looking for land. They usually stopped at one of the settlements and then combed the surrounding area in search of prime unoccupied land to stake out a claim. They were keen observers, and a number of those who roamed our area commented on one particular piece of ground on Boone Creek, lying partly in Clark and partly in Fayette.

Billy Bush testified in a land trial that “Colonel David Robinson’s military survey at Rye Fields on waters of Boone’s creek was remarkable for its fine appearance in the year 1776, and until after 1780 people going from Boonesborough to Bryant’s [Station] commented on its fine appearance.”

Mrs. Ann South stated “she has been acquainted with David Robinson and William Robinson his brother on Roanoke in Virginia from about the year 1780 and since. About the years named she heard David Robinson speak of a beautiful tract of land he had in Kentucky near the ‘Rye Fields.’”

Major Robert McMillan, speaking of the same tract, said, “I know it as a place of general and particular notoriety.”

There are more statements in this vein, but we close with a quote from Robert’s brother, James McMillan, a surveyor who was constantly on the lookout for fine lands.

He testified, “I was not acquainted with the lines of Colonel David Robinson’s military survey but I [knew] the ground for it was one of the most noted places in Kentucky.”

How ’bout them apples! Such heady statements sparked a desire to know more about David Robinson and his military survey.

From Virginia historian F. B. Kegley we learn, “Col. David Robinson, one of Roanoke’s most distinguished citizens, came to Buffalo Creek in the beginning of the settlement [1746] with Captain George Robinson, who is given as his brother. He lived on Buffalo near Robert Breckenridge until after the Indian Wars and then moved to the North Fork [of Roanoke River].”

In 1769, this area became Botetourt County — one of Virginia’s earliest western counties.

The community on Buffalo (now Tinker) Creek, was located a few miles north of present-day Roanoke.

The North Fork community was a few miles west of Roanoke.

Robert Breckenridge was the progenitor of the eminent Breckinridge family of Kentucky.

Robinson (1730-1807) was born in Ireland and came to the Valley of Virginia with his parents at an early age.

He served as a lieutenant in the French and Indian War. He was appointed a major in 1774 and promoted to colonel during the Revolutionary War.

Like many other Virginians, he found time in May 1775 to venture west in search of lands. Robinson came to Kentucky, then Fincastle County, in the company of his brother William, Robert Boggs, Samuel Woods, David McGee, Fincastle County deputy surveyor John Floyd, and others.

During their excursion, these men claimed some of the finest Bluegrass lands. David Robinson selected a 1,000-acre tract on Boone Creek, authorized by a military warrant awarded for his service in the French and Indian War.

John Floyd returned to survey Robinson’s “Rye Fields” in May 1776. Floyd chose his own tract, called “Woodstock,” on the west side of Robinson’s. (During that 1775 visit, David McGee picked out a place at the head of Jouett Creek where he established one of Clark County’s earliest stations in 1779.)

Robinson stated in a court deposition “he did not remove to Kentucky until 1783.” He never married and was said to be “a good classical and scientific scholar.”

Robinson resided on his military survey at the home of Alexander Montgomery, who had married his niece, Elizabeth Robinson. He died there at the age of 77.

Using deed-plotting software (DeedMapper) it was possible to place Robinson’s “Rye Fields” on a topographic map.

The land straddled Boone Creek, beginning about a quarter of a mile north of Pine Grove and extending south to Sulphur Well Road.

If you are driving on Todds Road one of these days, look to your left and right as you cross Boone Creek, and you will be viewing the ground the pioneers called “one of the most noted places in Kentucky.”