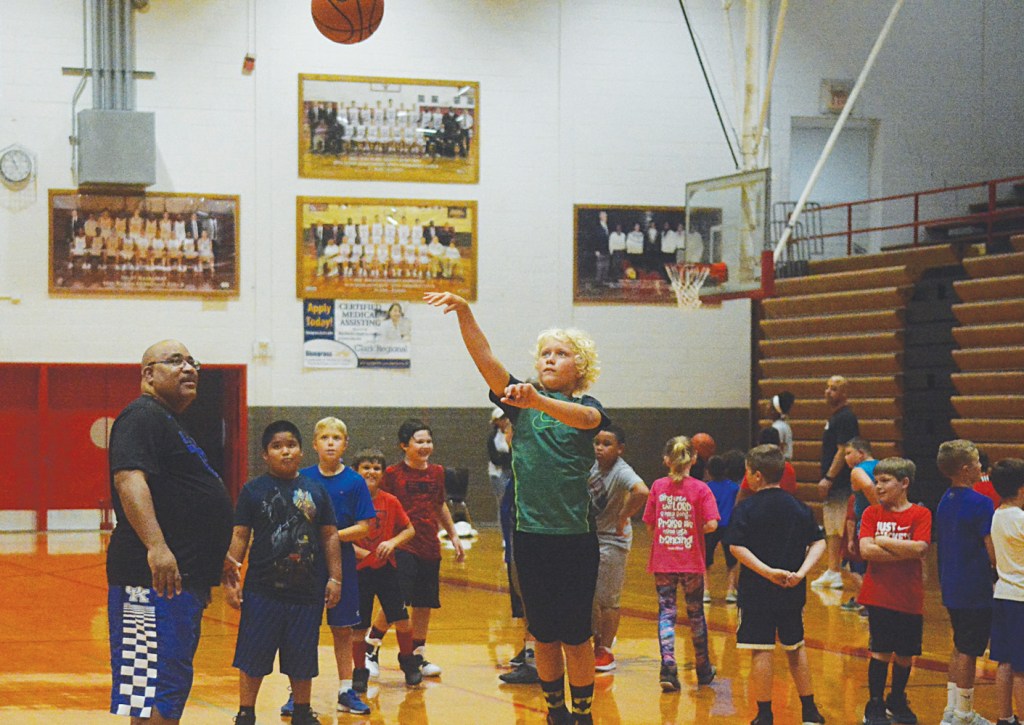 Jackson Rogers shoots a jumpshot in a shooting drill. (Photo by Micah Satterly)

Dwain Gay’s youth basketball camp made its return on Tuesday with around 50 kids in attendance for the first day of the three-day camp.

Gay was grateful seeing how many kids wanted to participate and be active rather than staying in the house and relaxing during a summer morning.

He said around 45 of the 50 kids at the camp were returners from last year and he said because of the kids who wanted to come back, last year’s camp was a success.

Overall, Gay said he was impressed with the youth on the first day.

“The first day of camp was great,” he said. “The kids were really excited about being here. They were working hard in the drills. In the team play drills, I thought they shared the ball well. There is still some teamwork things they can still work on like being in position, spacing and other things like that. We will talk more about it tomorrow to help get them spaced out a little bit better.”

Gay understands that grabbing kids’ attention is difficult at times, but said he has a strategy to help them grasp the concept better.

“We are going to try and simplify some drills for them,” he said. “Some of the ways we can get them to follow direction is to offer a reward if they listen or do something right. Maybe show them that if you pay attention and listen then you will get good results. The ones that do not listen will cause you to lose a game or miss out on a chance to participate. Staying focused, listening to coaches and going where you are supposed to be is good incentive to do what you need to do.”

Gay said he has been looking forward to being back in the gym with the kids for a while now.

“We all have been very excited to be back in here,” he said. “This is a good time of year right before school starts to lay some foundation for basketball season. I know it is football season, but a lot of kids like to do basketball this time of year. I know they enjoy it and I am excited to get them in here and get them back started again.”

Gay said he realizes that it is hard to plant a seed about the full knowledge of basketball in a short time frame, but hopes to give the kids a better comprehension.

“It is hard to cram a lot in three days,” he said. “What we try to do is give them certain things and show them the proper ways to do things. That way they will take it with them the rest of the summer and leading up into the season. Usually they have a lot of time on their hands with school being out and after school when it starts back. The things that we are doing now are not just to try to do a lot of repetition, but to get it in and do it soundly. So when they take it with them, they will know the right technique and the proper way to do things. They will learn to apply it when they have their own time.”

Camp will resume at Campbell Jr. High on Wednesday and Thursday 9 a.m. to 12 p.m.