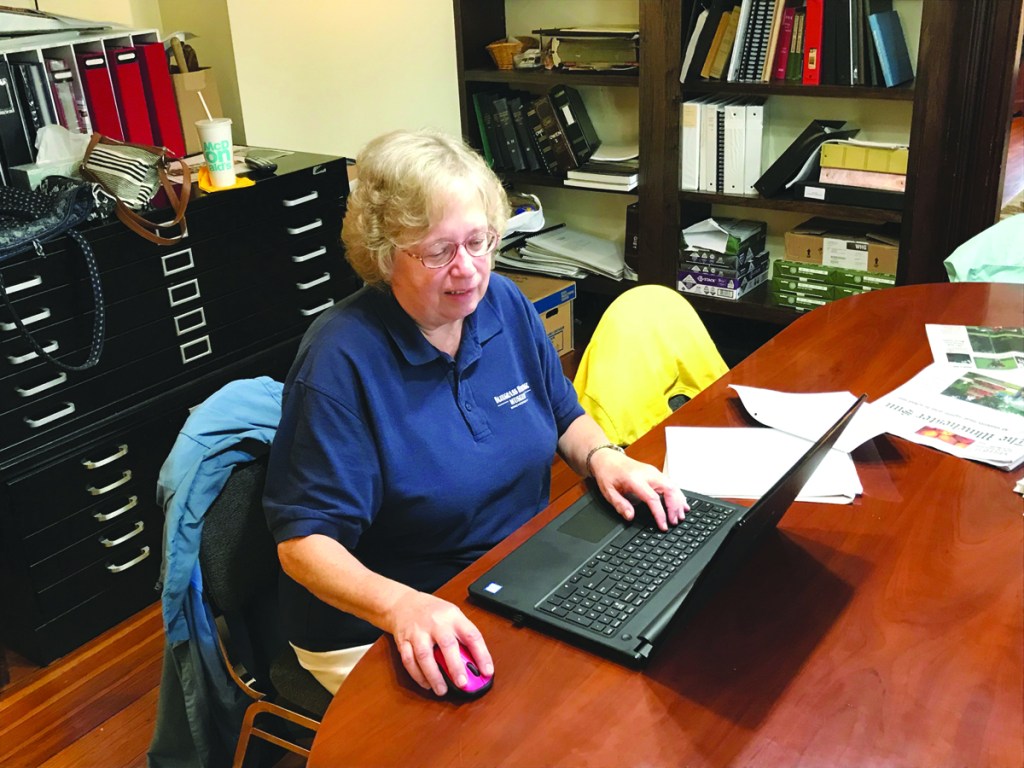 Rosemary Campbell works on the next issue of the Bluegrass Heritage Museum's newsletter. Campbell, a retired teacher, has volunteered at the museum for a decade. (Photo by Fred Petke)

While Rosemary Campbell was teaching fourth grade at Providence Elementary, she spent a fair amount of time teaching writing and social studies, particularly the history of different areas.

Those two interests have served her well during her decade volunteering at the Bluegrass Heritage Museum.

The opportunity to work at the museum presented itself.

“I had retired from teaching in 2007 and was looking for something to keep busy with, and realized we hadn’t been to the museum yet,” Campbell said.

She and husband George paid the museum a visit, which settled things.

“I was basically hooked,” she said, and started volunteering one day a week. The days can involve a bit of everything from leading tours of the three-story museum to producing the quarterly newsletter.

Presently she’s working on a special project creating an archive of the Clark County Chronicles columns for future use. The columns were originally printed in the 1920s, but were reprinted in the 1980s in the Winchester Sun, she said.

“I thought it would be nice to get a clearly-typed and organized copy to have as a reference,” she said.

“It’s fascinating to see how people right here lived and worked to develop this community. Exploring where we’ve been explains where you are now.”

Teaching still plays a part in her volunteering.

“I’m also heavily involved in our educational programs,” she said. “Every year, we have the fifth-graders from Baker (Intermediate School) come in for Civil War Days.”

The students will go from station to station to learn about different aspects of the war.

Campbell has also been part of the museum’s growth in the last decade. When she started, the public space was only the first floor, though the second floor was nearly finished. It officially opened in 2008, followed by the top floor in 2010.

“Every room is just packed with history,” she said. “A lot of people come from around here and are surprised by how much we have here.”

Campbell just enjoys being at the museum, between the history and the other volunteers.

“I love the different things we do,” she said. “Even more, I enjoy the people here. I think you have to be involved in something, some kind of constructive purpose to help other people.”