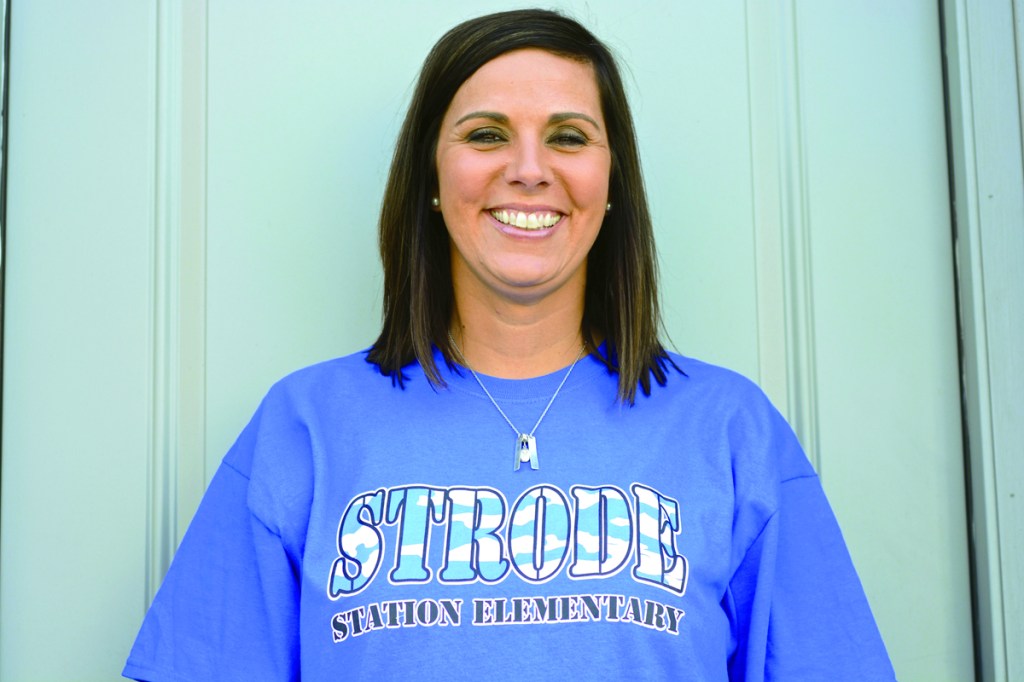 Kelly Fithen will start the 2018-19 school year in a new job and a new school as the assistant principal at Strode Station Elementary School. Fithen is coming from a teaching position at George Rogers Clark High School and she has also taught at the middle school level.

A  new job in a new school, working with new grade levels — it may seem daunting, but Kelly Fithen said she is excited about the challenge ahead.

When the assistant principal job opened, Fithen said it was time to make her move.

“I’ve just kind of been waiting for the right time to switch and move into an administration job,” Fithen said.

Fithen, a Clark County native, attended Eastern Kentucky University for her bachelor’s, master’s and Rank I in instructional supervision. She is certified to teach English for fifth through ninth grade and math for fifht to 12th grade.

After college, Fithen returned home to Winchester, teaching a year at Conkwright Middle School before switching to GRC.

During her time teaching, she returned to school to complete her principal’s certification.

Overall, Fithen has now clocked 15 years as an educator.

“I’m excited because, at this point, I will have worked in all grade levels,” she said.

This position will also be Fithen’s first experience in administration, though she has always been a leader throughout her career.

But, it isn’t entirely foreign. Fithen is accustomed to working with elementary-age students as she teaches at and co-owns Studio One, a premier dance studio in Winchester.

“I’m used to being around young kids,” she said. “I have young kids myself. I’m also around tons of young kids at the studio, so I’m already used to that age group. I know it will be a different transition in this school and the school atmosphere, but I’m excited about it.”

As assistant principal, Fithen will be hands-on on all levels whether it be working directly with teachers, monitoring students or helping the principal. It’s a team effort, she said.

As a young child, Fithen enjoyed “playing school,” and she always wanted to be the teacher.

“I had a classroom with the chalkboard and worksheets and papers that I would always give to my pretend students,” she said.

Her play eventually manifested into concrete goals, and it became a matter of choosing schools, getting the certifications and degrees, she said.

“It’s never really been a question to me,” she said.

“It’s fulfilling to be around kids. No matter what the age, whether it be elementary, middle and high school, they all have so much to offer,” she said. “They all have just such unique personalities, and just getting to talk with them. I enjoy spending time with them and  watching them transition themselves from one step to the next.”

Fithen said she also enjoys that each day is different, but that can also come with challenges.

“It’s exciting because it’s not the same thing day after day,” Fithen said. “But sometimes it’s hard to plan and know exactly your plan of action when you don’t know what’s going to happen.”

As the school year quickly approaches, Fithen said she already has some goals in mind. First and foremost, she needs to get into the building, meet the staff and get accustomed to the atmosphere.

“I think my first year will be a huge learning experience,” she said.

“My goal is to do everything that I can in the best way I can to help the teachers and to help everyone,” she said.

Fithen said she hopes to exhibit the qualities of a good leader, primarily working to be an effective communicator.

Fithen will be working alongside Ruthann Sharrock, the incoming principal at Strode. Fithen said she and Sharrock worked together in the past and the pair has even followed similar paths. Throughout her time working at the various levels, Fithen said she learned so much from her experience she will carry on with her in her new position.

Of course, she will never forget her students, she said.

“The last couple years when I’ve been working with seniors, I’ve had some of them, tell me ‘thank you’ in person,” Fithen said. “I’ve had a lot of them write me a card or some note saying ‘thank you.’ I’ve had some send me an email thanking me for all that I’ve done to help them get where they are.

“So that’s huge and phenomenal and just an honor to be able to help those students, all the students, get where they are. But it’s wonderful to reflect and have those mementos to look back on and know the students took time and wanted to say thank you in return.”

Fithen said she wants people to see she’s easy to communicate with, always willing to help, she’s a team player and she continually has the students’ best interests in mind.

“I am here for the students, and I want to do everything I can to make everything better and to continue making Strode a great place to be,” she said.

Fithen said she hopes to encourage students to do the best they can and to follow their dreams, and she hopes to show her staff how to be open, ready and willing to learn and work as a team.

Education was what she was born to do, Fithen said.

She can’t imagine doing anything else.

“It helped me to become who I am today,” she said. “You learn a lot from all the people that you’re around, whether it be students or staff. I think every interaction, every moment all kind of help build who you are.”

As for the future, Fithen said she doesn’t have a set plan. Instead, she’s focused on the here and the now, enjoying the new beginning in what is already a long, fulfilling career.