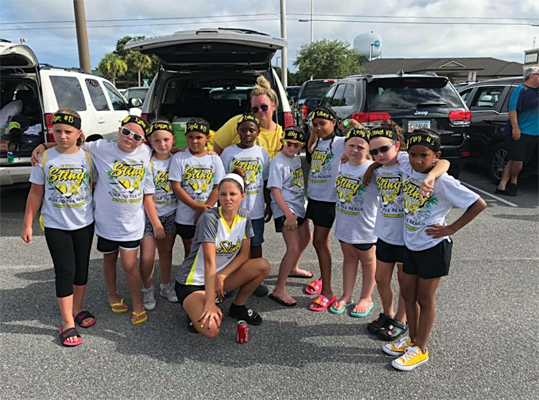 The Kentucky Sting fast-pitch softball team competed in Fort Walton Beach, Florida for nationals July 7-15, but fell short in the first round.

The team is made up of players from here as well from surrounding counties and cities including Bath County, Versailles and Pikeville.

The team was co-created by Bill Hodson.

There are teams all the way from eight-and-under to 14-and-under.

The Sting travels every weekend all across Kentucky to various tournaments.

Eight-and-under coach Connie Hill said it was a blessing to have her team compete in Florida.

“Taking this team to compete for a national championship in Florida was the opportunity of a lifetime,” she said. “These girls showed us a completely different side of them. They dug deep, and as a coach, I could not be more proud.”

Lilli Hill said she was anxious to play in the tournament.

“I was nervous at first,” she said. “Then once we got there I started to get excited.”

“It was super exciting,” she said. “There was actually a lot of people there to watch it. The tournament was a pretty big deal.”

Connie Hill said she cannot fathom how thrilled she was for the girls making it that far.

“I cannot even begin to express how proud I am of these girls,” she said. “The hard work and dedication that they put into getting better every single day is just an indescribable feeling as a coach.”

Lilli Hill said she is blessed to be surrounded by the people that she has in her life.

“I love my teammates,” she said. ‘It is awesome having my mom as a coach also. She is the best coach and teacher you could ever have. Softball has been a part of our lives for as long as I can remember. I would not want it any other way.”

Tichenor is straight to the point on why she loves softball.

“I love hitting and running,” she said.

Connie Hill said the expectations they had were to give it all they had and to win.

“We wanted to get to the national championship,” she said. “We also wanted to compete and represent Kentucky well, which is exactly what we did. I could not be more proud.”

Lilli Hill said all she wanted to do was win, but still had fun nonetheless.

“My goal was definitely to win,” she said. “Going to it is a big deal within itself though. I am still happy that we got to go.”

Tichenor said she wanted to bring home the prize.

Connie Hill said she appreciates the diversity travel ball brings to her team.

“Anytime you travel out of state to play ball you learn new rules, areas and teams,” she said. “Down south, ball is just different. There are no breaks for them due to weather. They get to play year round and it shows. The parks were amazing as well as the community support. My goal is to have that here very soon.”

Lilli Hill said she wants to continue to grow as a player each day.

“My goal for myself is to become better than I was yesterday,” she said. “Hopefully one day I can get a college softball scholarship to Oklahoma University.”

Tichenor wants to achieve the same for herself.

“I want to become a better player,” she said. “I want to catch more pop-ups and be more like coach Connie. I want to grow up and play college ball.”