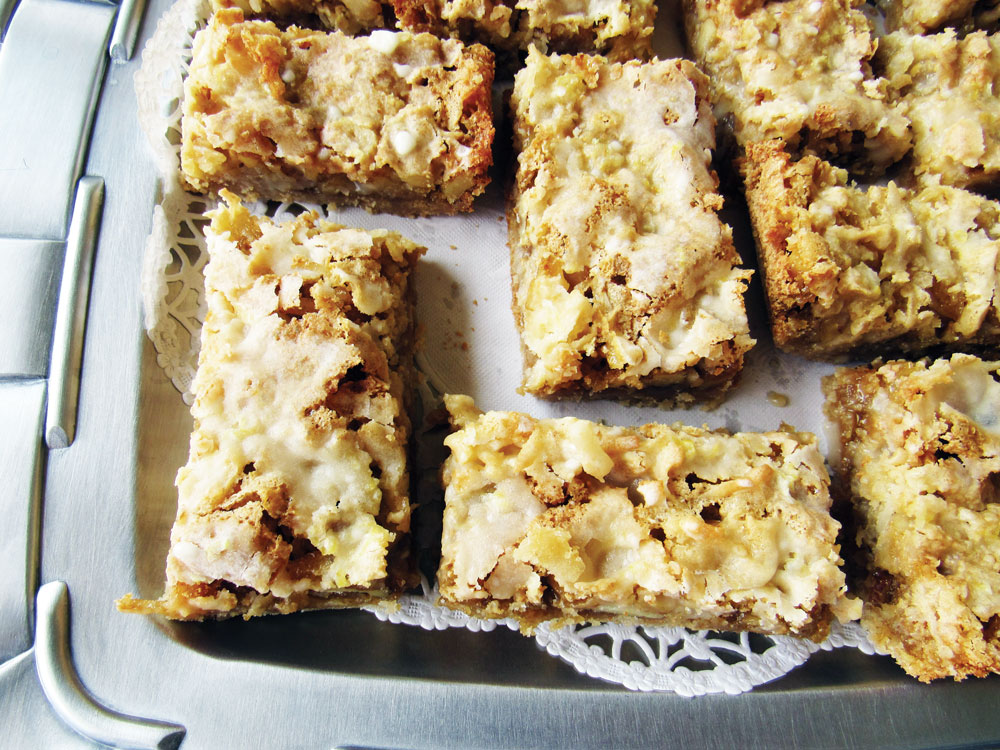 Preheat oven to 350 degrees. In a bowl cream butter and sugar until light and fluffy; gradually beat in flour, mixing well.

Press into bottom of a grease 13×9 inch baking pan. Bake 8-10 minutes or until edges are golden brown. Cool on a wire rack.

For filling, in a large bowl, beat eggs, brown sugar, lemon peel, and extracts until blended. In a small bowl, mix flour, baking powder and salt; stir into egg mixture. Stir in coconut and nuts. Spread over crust.

Today’s recipe comes from my stack of dessert recipes — no, really it comes from the December 2014 issue of Taste of Home magazine.

It was family reunion time and I had to decide what kind of dessert I was going to take. 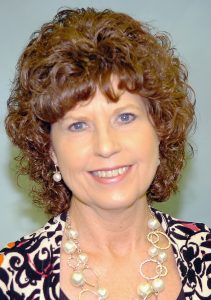 I knew I wanted to take something I’d never made before and after digging through my dessert folder I decided on this lemony coconut bar recipe because my mom loves lemon.

On Friday night before the reunion on Saturday evening, I greased a 9-by-13-inch pan and began putting the crust mixture together.

I’d planned ahead so the butter was soft. I mixed the brown sugar and flour together then added the softened butter and creamed the mixture using the back of a wooden spoon.

When it was thoroughly mixed, I put it in the greased baking dish and patted it out, popped it into the preheated oven and waited for the crust to brown. It took a little longer than the 8 to 10 minutes mentioned in the recipe.

When the crust had browned a little, I removed the pan from the oven and sat it on a cooling rack while I mixed the filling.

I cracked the eggs individually into a small bowl — in case I got shell in them — then poured them into a large bowl. I poured in the brown sugar then grated a lemon. I put a half teaspoon of the peel into the egg and brown sugar mixture then added the vanilla and lemon extracts.

I put my nose to the opened bottle and hoped it wasn’t so old the lemon part had evaporated and all that was left was the alcohol.

It was too late to head to the grocery and start this recipe over so I just trudged ahead and hoped the dessert wasn’t ruined.

I added the rest of the filling ingredients. Even though I love pecans, I opted to use walnuts in this dish just because I had some in my refrigerator.

After mixing everything together, I poured it over the partially-baked crust and put the dish back into the oven.

After 20 minutes,I opened the oven and moved the pan around. It was jiggling a little, so I decided to let the dish bake longer. After about 10 more minutes, I removed it from the oven and let it cool.

I got busy doing other stuff around the house when I remembered I was supposed to pour the glaze over the dish while it was warm. Oh well.

I mixed the glaze ingredients and poured it over the cooled cookie bars then went to bed.

Growing up, we didn’t attend family reunions, but as an adult, I started taking my grandmother, after my grandfather died, because she didn’t drive.

The family reunion I’m talking about is my dad’s father’s side of the family; my papaw Malcolm was one of eight children. That entire generation of folks is all gone now.

My granny was the last one to pass away, even out living my dad by several years. So I try to attend the reunion of my dad’s cousins, their children and their grandchildren. My mom usually rides along with us because she likes to catch up with that side of the family too.

On Saturday, Brad and I picked up my mom and headed to the reunion in Nicholasville.

While Brad was driving, I turned around and asked mom if she likes coconut. She said, “not really,” and I told her I made a lemony coconut dessert because I know she likes lemon.

She kind of laughed and asked if there was a lot of coconut in the recipe. I replied “sort of.” Then she squinched up her nose and said, “I might taste them.”

I turned around kind of disappointed. I really had picked this dessert because it had so much lemon in it and on it, and mom loves lemon.

Brad doesn’t like coconut either, but he threw in “I might try them, but just a little bite.”

When we got to my cousin Charlotte’s house, we realized not many relatives had shown up for this year’s reunion, but we did have a nice time with those who were there.

After enjoying a potluck, everyone started digging into the desserts. I took a bar and a few other desserts and after eating the lemony coconut bar, decided they were not my favorite. They were truly lemony and coconutty, but I wasn’t crazy about them and just about decided they were a flop.

After joining some of the lady cousins in the dining room where they were all talking about how much they liked them, I began to think maybe they weren’t so bad.

One cousin said she’d be waiting for the recipe when the column hits the website and others commented that the lemon was subtle and they liked the walnuts.

Another family member mentioned that he would prefer pecans, and I noted that the recipes calls for either.

My mother did try a bite, but said they had too much coconut for her liking.

After our nice visit, I decided since family liked the bar cookies I’d say this recipe passes the test as a nailed it. But I don’t think I’ll hang on to the recipe. There are just too many other dessert recipes in my stack waiting to be tested.