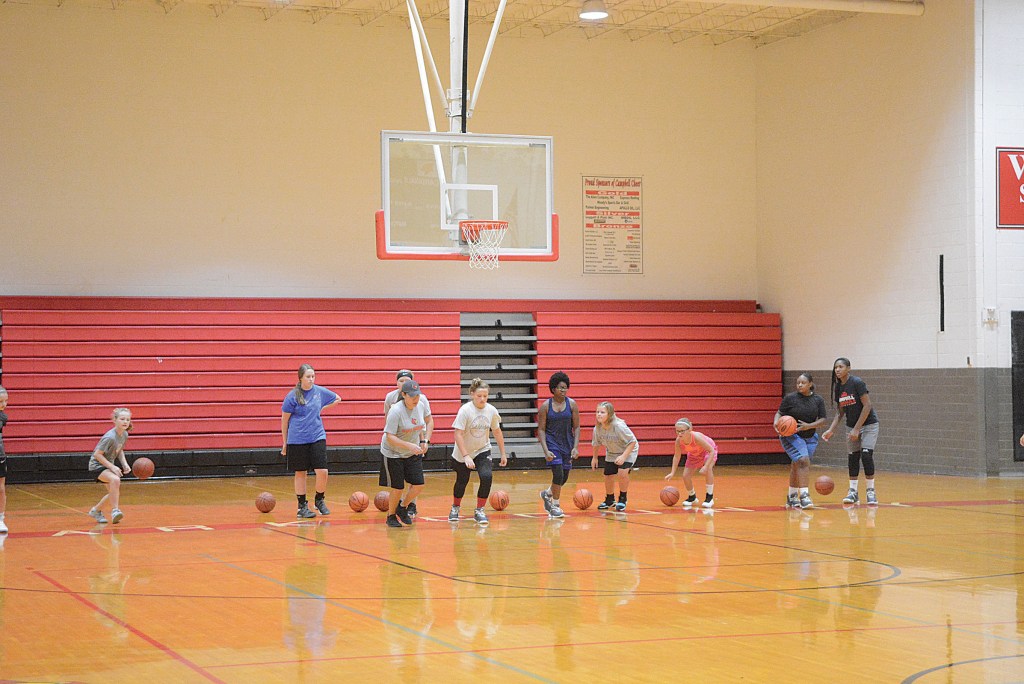 Campbell Jr. High's girls basketball teams returned to the gym to prepare for tryouts on Wednesday. (Photo by Micah Satterly)

Each day players have the ability to gain more knowledge of the game as well as the opportunity to work on fundamentals.

Head coach Tiara Bradbury said she has been pleased with the progress players have made since the beginning of summer.

“It is really crazy to see the difference in their game now,” she said. “They have gone from barely knowing how to dribble with their head down kind of smacking at the ball, to now being able to at least occasionally look up and dribble at the same time, which is amazing. We work on a lot of footwork things. From one day to the next, they have improved. The girls are here to work, get better and improve so it has been cool to see that.”

Bradbury and her players said they are anxious for the arrival of basketball season.

“We are all super excited,” she said. “Everybody is asking me as if they have already made the team about the schedule and when practices start. It has been good for us coaches to see the excitement they have and the girls being able to play. Seeing them transition from now until practice will be good.”

Despite not fully knowing which girls will be on the team, Bradbury said her expectations for the season will be to teach them the important of being a student-athlete.

“From a coach’s stand point, I want to show them how to be a student first and athlete second,” she said. “Being a teacher here at Campbell, and not only a coach, I see the importance in having a strong education. They need to know how to follow rules. If you cannot do it on the court, then you cannot do it in a classroom and vice versa. The expectation is for them to come and be prepared to work, do the work, improve and get better. Hopefully that will lead to their success. We are here for the girls to grow and we want them to grow.”

Bradbury hopes fundamentals will be something the players will comprehend better as the season draws closer.

“The biggest thing is fundamentals,” she said. “Going from helping out in high school to coaching middle school is a crazy transition. “It is crazy to see players at both levels not fully understand fundamental,” she said. “Some do not know how to front pivot or reverse pivot. They do not know the basic footwork of being down low in the post or up high to try to get around a defender. Fundamentals is something that I want them to know how to do and make them grasp the concept.”

Bradbury is encouraging all students interested in joining the basketball team to participate in tryouts August 1 at RDC.