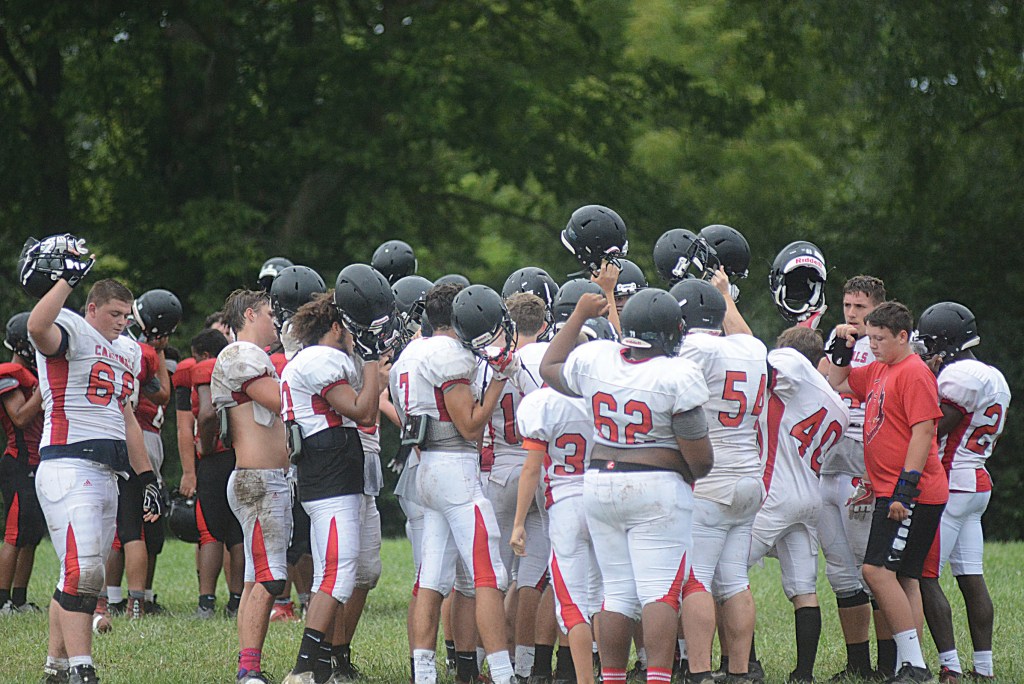 The Cardinals are expecting a major comeback season under coach Oliver Lucas and are determined to start a new era of football. (Photo by Micah Satterly)

August is officially underway which means there are only a few weeks left until GRC kicks off the season opener against Anderson County.

The Cardinals practiced in full pads for the first time all summer which took their excitement to another level.

GRC has high hopes for a winning season, which the Cardinals have not achieved in years.

Head coach Oliver Lucas is excited to get his first full season as the coach and senses special qualities in this team than any other team he has had in his coaching career.

Lucas came in as coach halfway through the season last year to help the team finish with a record of 5-6.

Lucas said he is excited for his first full season to begin and is ready to see how well the team will learn his system.

“Now I feel like these are my kids,” he said. “These are the ones that have had two years with me now so they understand what we ask and what is demanded of them in regards of time, effort, and all that. They know the tempo and everything that is going on. I would say we are a month ahead right now in regards of our preparation.”

Lucas said he has been extremely pleased with the hard work the team has put in this summer.

“That is the good part about this team,” he said. “They know what is expected of them. You do not have to babysit them. They do not shy away of work. They have great work ethic, which is because of the parents. A lot of them are farm kids so they know what hard work is.”

Lucas said the team is more anxious than ever before to get the season started now that August has arrived.

“We are just as excited now as anybody,” he said. “August is here and now you get to see what your team is made of. You can never earn a starting spot until the pads go on. Anybody looks good without pads. Right now, everybody is undefeated. No one has played anyone.”

Five wins last season was the most wins the school has had since 2014, but Lucas said this season will be special and plans to keep everyone level-headed.

“People say what they want to say, but they are really not fooling anybody,” he said. “I am always on the positive side. Our kids know that we have an opportunity to do something monumental so we strive for that. It is our goal and it is posted everywhere so our kids can stay focused. We want them to stay focused on the task at hand because if you do not look out on the horizon and see where you are trying to go, then you will never get there. I want our kids to know they have a chance.”

GRC will start the first two games on the road beginning with Anderson County leading into Harrison County the following week.

The first home game will not be until Aug. 31 when the Cards will face Dunbar out of Lexington.

Lucas said the strength of schedule is all just a matter of numbers and will not use that as an excuse if the team does not perform well.

“No schedule really helps you,” he said. “You have got to play the game and earn it no matter what you do. Everyone is undefeated and we have not beat Anderson. We left some games on the field last year as I thought we could have probably ran away with seven wins rather than only five. Here again, the same thing will make you happy or it will make you cry. We are looking forward to where we are right now and we will build from that.”