Seniors ready to have breakout season 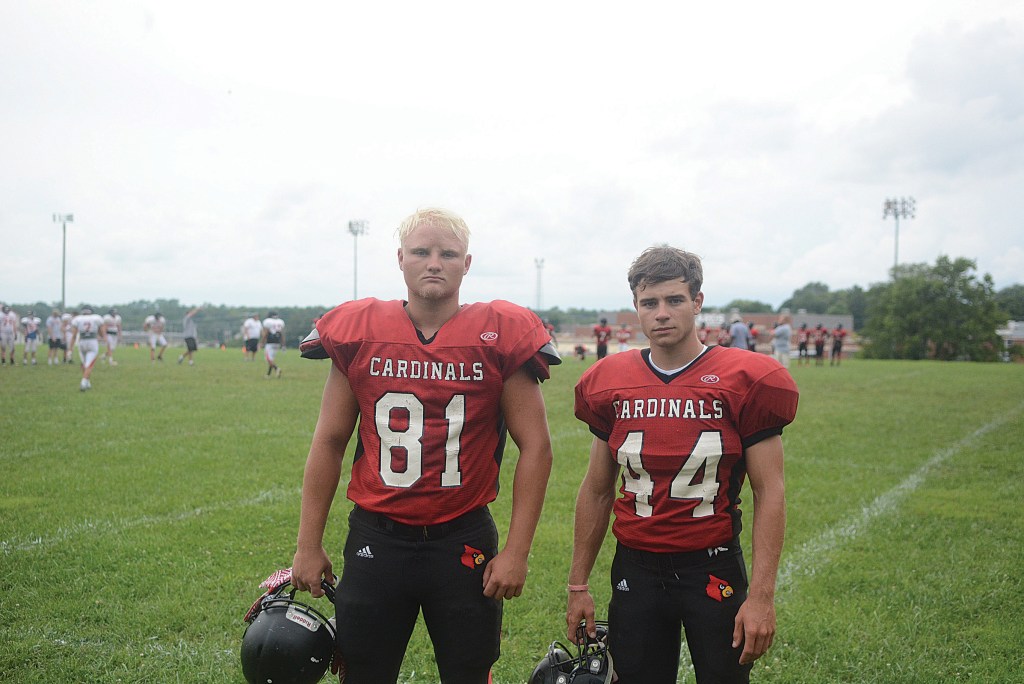 Seniors Landon Langfels and Marcus Wiseman are more than ready to get the 2018 season started and silence the critics. (Photo by Micah Satterly)

George Rogers Clark football is predicted to finish second in their district ahead of schools such as Tates Creek and Lafayette.

If the Cards finish second, that would mean the 2018 season would be the season GRC has had since 2009 when they finished 8-4.

Despite speculations, the players and coaching staff have deeper ambitions to fulfill than to finish second.

Landon Langfels and Marcus Wiseman have a state championship on their eyes and plan to go to the distance in achieving that dream.

Head coach Oliver Lucas as well as the players are aware of how talented the team is, so now all they have to do is transition that into winning football games.

Langfels said he cannot put into words how excited he is for the upcoming season.

“We are all very excited,” he said. “New season, same team. We are just going to be better this year.”

Wiseman is confident this season will be the best one yet.

“It is going to be a good season,” he said. “We have got a good group of sophomores and juniors. Coach Lucas always says that you cannot beat him when the second year comes around and it is definitely starting to show.”

Lucas took over as head coach during the season last year and has began first full season with the Cards in 2018.

Langfels his team has been dedicated to the winning mentality all summer.

“We have been working hard everyday,” he said. “Weight room, conditioning or something. No days off.”

Wiseman said the mission to become better began shortly after the end of their 2017 season.

“This summer we have worked hard, but it did not just start this summer,” he said. “The season ended and we had a couple of weeks off, but as soon as we were able to get right back into it we were going as hard we could. We were back in the weight room grinding, getting bigger. Then we came out with two-a-days and we are doing all we can just to win that title.”

Although the past teams have historically not been great, Langfels said each season is a new beginning with a new chapter.

“We cannot live in the past,” he said. “The past is the past. This is us now and we have worked very hard to get to where we are now. Let’s get this season started and we can show everyone what we have been doing instead of talking about it. We do not want to settle for good. We want to settle for greatness.”

Wiseman said history is meant to be left in the past and this is a new generation of football that is just beginning.

“We had bad seasons before,” he said. “This is a new era thing with coach Lucas here and last season we went 5-6 and if you ask anyone here, they will tell you that is not worth anything. Nobody wants to be 5-6, they want to be 11-0 and win the state. . If you keep your head on thinking we are going to win it and do this and that then that is great. We do not have any negativity on the team. Everybody is positive, wanting to play, wanting to hit and ready to go.”

Langfels said he has been pushing himself and his teammates to get into a winning mode.

Wiseman is really liking how the team is unfolding this close to the season.

“We are doing good as a team,” he said. “Our offense is coming together as one and they are all moving sort of like one big player. Defense is the same. Everybody keys on everybody. Football is an eleven-man team. One person does not outshine everybody.”