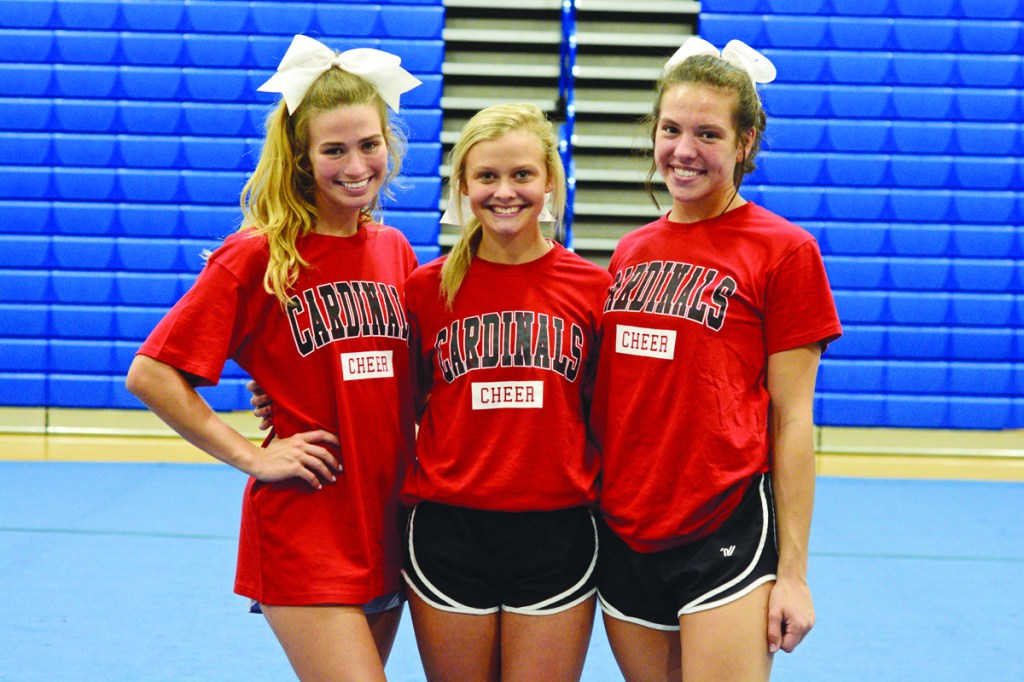 Molly Franklin, Aly Crowe and Sydney Miller all made it onto the Universal Cheerleaders Association All-American team after trying out during UCA camp in July. The George Rogers Clark High School cheerleaders will travel to London in December to perform with the All-American team in a parade. Not pictured: Tae Nailing.

GRC senior Sydney Miller and juniors Aly Crowe, Tae Nailing and Molly Franklin will perform alongside 10,000 others before a street-side audience of more than 1 million people as well as a global audience via television.

The GRC cheerleaders tried out and made it onto the Universal Cheerleaders Association (UCA) All-American team in July while at UCA camp at Western Kentucky University.

Cheerleading squads who attend the camp can nominate a maximum of six squad members to try out for the honor of being named a UCA All-American, according to UCA’s website.

The cheerleaders are slated to leave Dec. 26 and will spend the first few days practicing and seeing the sights. Crowe and Franklin said they had never been abroad before, and are nervous about the flight, but overall excited about the trip.

Miller said the cheerleaders are fundraising to go on the trip. The trip can cost more than $3,000 per person depending on flight locations, according to UCA’s website.

Miller said she was ecstatic when she found out she made the team which happened to be during a Space Jam Rally; the cheerleaders dressed as aliens.

“It gives you a lot of opportunities to meet people from all over the world,” she said. “So when I found out that I had this chance, I was super excited.”

Crowe said she is excited about the opportunity because it will give her an edge when applying for college scholarships.

Miller said the cheerleaders found out about tryouts just hours before and performed in front of the camp.

“Shout out to my team for being so supportive even though I had back surgery so I can’t do a lot but they all support me and still encourage me to do everything,” Miller said. “They keep me safe, and I appreciate them.”

Crowe and Franklin said they’d both like to thank their coaches for being the squad’s biggest cheerleaders.

“We want to give a shout out to the coaches for pushing us to do this,” Franklin said.