Nailed It or Failed it: Best Ever Blueberry Cobbler 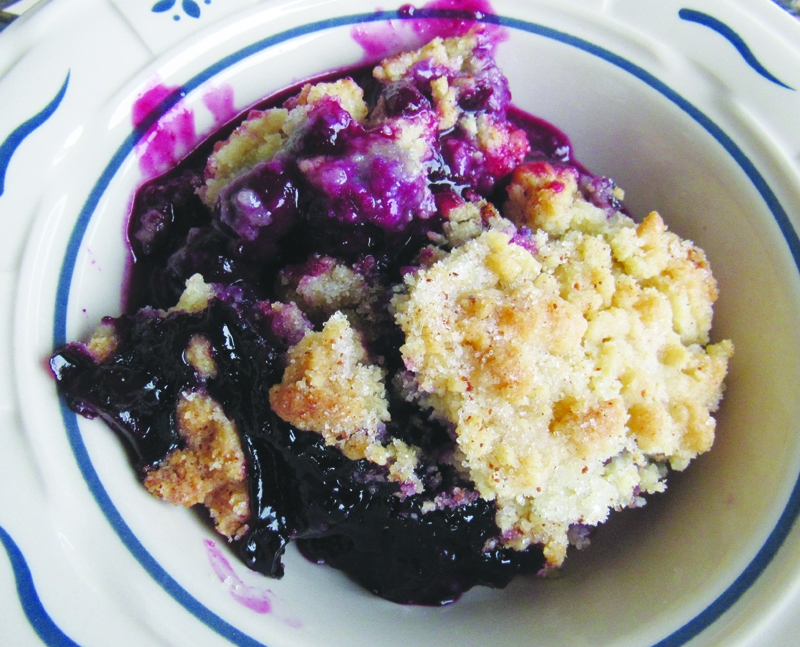 With summer in full swing and fresh fruit everywhere I’m in the mood for sweet treats.

Our blueberry bushes have been producing quite well this year, and instead of freezing them, we’ve sold some, we’ve eaten lots, and I finally decided to bake with some.

Of course, I wanted to bake something I’d never tried before, so I started sifting through my dessert recipe folder and found today’s recipe.

I chose this recipe because it called for 6 cups of blueberries.

We had just a little more than 6 cups that I needed to use since I wasn’t eating them fast enough.

The photo that accompanied the recipe was too small to tell if it looked good, but hey — it was a cobbler, it had to look good right?

I had lemons in the refrigerator drawer, and the other ingredients are always in my refrigerator or my cupboards since I like to bake.

It was Saturday afternoon when I decided to throw this dish together.

I don’t have a quiche pan, and I figured my pie plate wouldn’t hold all of the ingredients.

I thought about making this cobbler in a cast iron skillet, but I don’t have one that is 10 inches in diameter, so I opted to use a round 2-quart casserole dish.

I buttered the dish then poured the blueberries into it.

After zesting one lemon, I ended up with more than enough zest for this recipe.

I added the sugar to the lemon zest and used my fingers to combine the two, just like the recipe suggested.

Then I just whisked the flour in and sprinkled the mixture over the blueberries.

I used a spatula to move the berries around to get them coated with the mixture and to make sure it was evenly distributed, with no mounds on top.

Next, I mixed the crumble topping ingredients.

I cubed the butter into the dry ingredients and used my antique pastry blender to work the mixture into what looked like pea-sized crumbs.

I cracked an egg into a small dish and then opened the cabinet for the vanilla.

There was no vanilla in the cabinet.

I thought “surely there is vanilla in the basement among my stash of staples that won’t fit in my kitchen cabinets.”

I headed to the basement and found not just one, but two new bottles of vanilla, whew.

Once I was back in the kitchen, not knowing my strength, I over excitedly opened the vanilla and spilled a decent amount on the counter.

Darn, that stuff is expensive, and I just wasted a bunch of it.

I knew my counter was clean, but instead of trying to save the spilled vanilla I just wiped it up with a dishrag — what a waste.

I shook my head and turned my attention back to the cobbler.

I measured out vanilla, added it to the beaten egg and used my cute little tiny whisk, which I inherited from Brad’s mom’s estate, to mix the two.

I poured the vanilla and egg into the crumb mixture and gently tossed the two.

The dough came together in no time, and I didn’t have to worry about overworking the dough.

I sprinkled the crumb mixture over the top of the berries and debated on whether I wanted to use nutmeg or cinnamon on top, or both.

I decided to go with nutmeg.

I didn’t measure it, I just sprinkled some on top of the dough then placed the dish in the oven to bake.

I had set the timer for 25 minutes so I wouldn’t forget to check to see if the cobbler was getting too brown.

When the timer sounded the cobbler looked fine and had not begun to brown, so I didn’t bother covering the dish with aluminum foil.

I reset the timer for 20 minutes and went about my business of cleaning up the kitchen.

When the timer sounded for the second time the cobbler was nice and brown, not too brown, and bubbly. I opened the oven, and the smell was great.

We ate supper out at our newest restaurant on Main Street, and after getting home feeling stuffed, I asked Brad if he wanted some cobbler.

He said he’d take a tiny bit. I put a small spoonful in a dish for him and scooped out a little bit more for myself.

Brad didn’t want his heated, but I put mine in the microwave for a few seconds and then added some vanilla ice cream.

Brad took a bite and said this is good, sweet, but tasty.

I took a bite and thought, oh my gosh this is the Best Ever Blueberry Cobbler.

The blueberry flavor was great, and I could taste that little bit of lemon zest I added to it; and the hint of nutmeg just put this over the top in my book.

The crumb topping wasn’t like any other cobbler crust I’d tried.

It was good; I was even tempted to lick the bowl — but I didn’t.

I shared this cobbler with our neighbors Chris and Rachel because I knew if I didn’t get it out of the house it was going to wind up in my belly, and like I’ve said before, I don’t need to eat an entire cobbler all by myself.

I dropped some cobbler at Chris and Rachel’s house the next day and told them to let me know what they thought.

After a couple of days went by and I hadn’t heard from them I was beginning to think they might not have liked it.

I was thinking they were thinking “if you can’t say something nice, don’t say anything at all.”

I decided to text them, and immediately they responded with a thumbs up and “awesome, maybe the best I’ve ever tasted.”

So, my friends, I nailed this recipe, and I added it to my self-made cookbook.

I’m already looking forward to next year’s crop of blueberries.

Oh, I might not have to wait long because I think there still may be some in the freezer from last year’s abundance.

I’m headed to the basement to check.

For the Blueberry filling:

For the Buttery Biscuit Crumble:

Place blueberries into prepared baking dish. In a small bowl, combine sugar and lemon zest. (you can work the zest into the sugar with your fingers to release the essential oils for maximum flavor).

Add the flour and whisk until thoroughly combined. Sprinkle mixture evenly over berries in prepared baking dish and toss gently.

Make sure the sugar and flour mixture is evenly distributed over the fruit with no mounding in the center or in any one place.

This will ensure the sugar will caramelize and the flour will thicken evenly throughout the cobbler with the berry juices. Set aside.

In a medium bowl, whisk together flour, sugar, baking powder and salt until well combined.

Using a pastry blender, cut butter into flour mixture until it resembles a coarse meal with small pea-sized pieces of butter.

In a small bowl, whisk vanilla into beaten egg using a fork.

With a fork, gently toss beaten egg and vanilla into flour mixture until moistened and dough starts to hold together.

Continue to toss and blend gently with fingertips until well combined yet taking care not to overwork the dough.

Sprinkle biscuit crumble topping with sugar and, if desired, dust with freshly grated nutmeg. OR, dust with cinnamon-sugar combining sugar and cinnamon before sprinkling over topping.

Bake in preheated oven until topping is golden brown and filling is cooked through and bubbly, about 40 to 45 minutes.

To prevent over-browning of topping, cover with sheet of aluminum foil after 25 minutes of baking.

Remove foil and carefully transfer to wire rack to cool.

Serve the cobbler warm a la mode or with fresh whipped cream or both.