Jasmine Flowers commits to the University of the Cumberlands 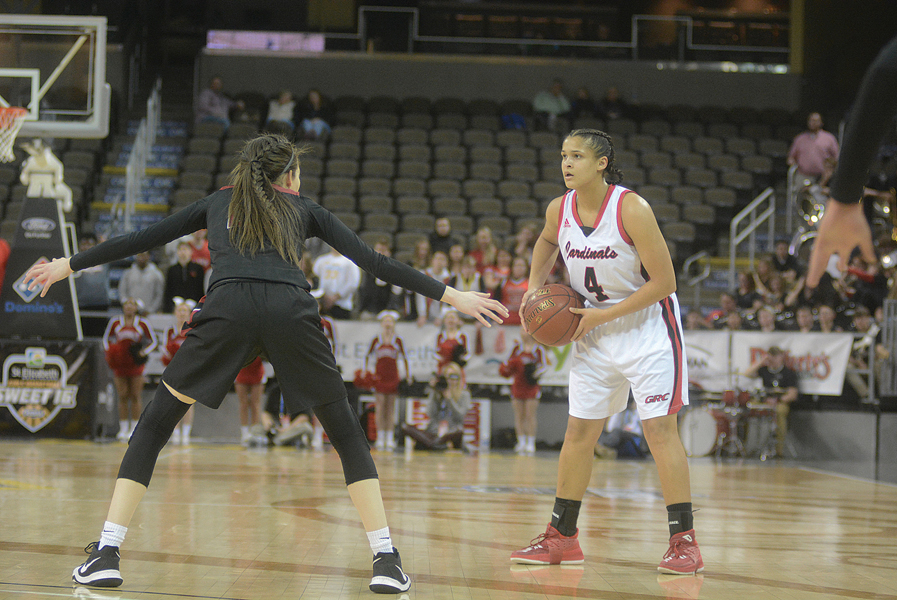 Jasmine Flowers committed to the University of the Cumberlands and plans to end her career at GRC with a state championship. (Photo by Micah Satterly)

GRC senior Jasmine Flowers commited to play basketball at the University of the Cumberlands has no goals set short of a championship.

Transferring in to GRC her eighth grade year after attending Scott County and Bath County, Flowers has played a major role in helping the Cardinals get to the Sweet 16 and winning the 10th Region in back-to-back seasons.

Her emphatic defensive energy, rebounding and hustle plays have picked up the Cards when they needed it most.

In the Elite 8 against Elizabethtown this past season, Flowers drilled a crucial three-pointer with seconds to spare to help send the game into overtime allowing GRC to come out with a victory.

Flowers said Cumberlands is the perfect school for her because she loved everything about it.

“It is only two hours away from home,” she said. “The campus is gorgeous and the coaches are amazing. All the players and coaches act like a family and I want to be a part of that.”

Flowers said her goals in college will not be much different than the ones she has for her last season at GRC.

“I want to focus on getting an education first,” she said. “Then my only other goal would be getting through the Mid-South Conference and winning the NAIA championship.”

Despite having to adjust from transferring in to GRC, Flowers said adjusting does not always get easier.”

“I am nervous about being at a new school,” she said. “When I moved here to Clark County I was extremely nervous. I am excited about making new friends and meeting new people. I think this new chapter of my life is going to be great.

Looking back on her career at GRC so far, Flowers said she would not change a thing.

“I would say it has been great,” she said. “Going to state twice and winning region has been amazing. When I went to other schools, I have never done anything like that. I have been with a great group of girls. It has been a great ride.”

Flowers is not looking too far ahead to college yet as she said she still has unfinished business for her senior season.

“Winning the Sweet 16 would be the icing on the cake,” she said. “I want to win region for the third time in a row and continue our tradition of winning the district. I am ready to get this season started already and I want to put in the work it takes to achieve those things.”

GRC head coach Robbie Graham said he has full confidence in Flowers as a player on and off the court.

“It is a very proud moment,” he said. “All the girls on my team work hard and I know she has what it takes to play at the next level.”

“She is a good perimeter player, good shooter and a good defender,” he said. “She will definitely excel at the University of the Cumberlands.”