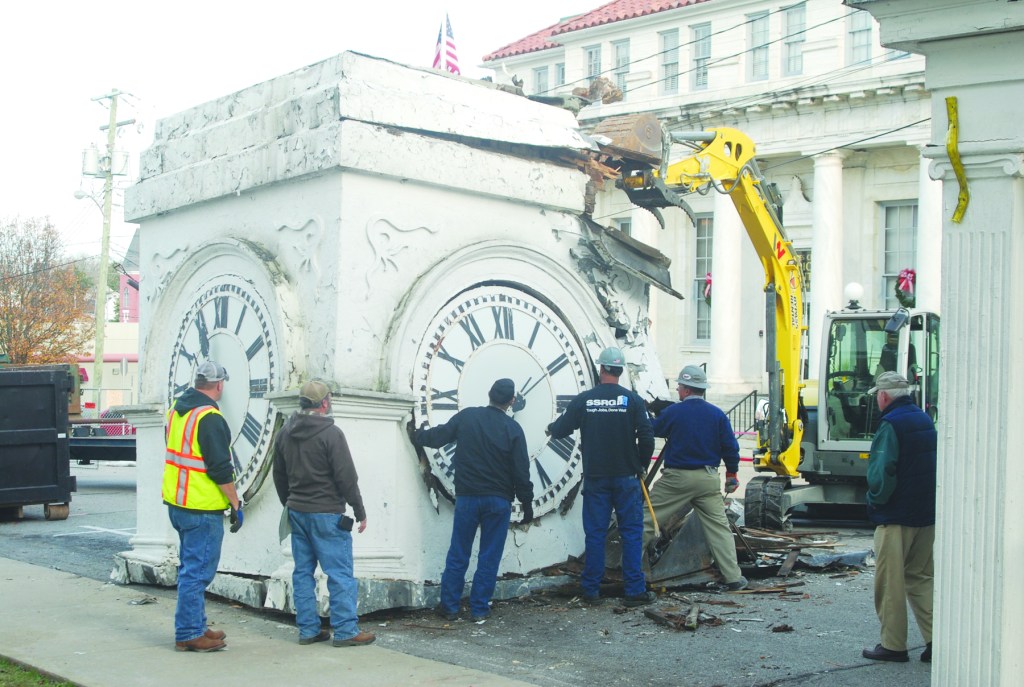 County road workers and employees ot Structural Systems Repair Group prepare to remove the second clock face from the Clark County Courthouse's bell tower in November. All four clock faces were removed to be preserved, though the tower will be demolished. (Photo by Fred Petke)

Work to install the new tower on the Clark County Courthouse may begin as soon as next week.

Clark County Judge-Executive Henry Branham plans to address the Winchester Board of Commissioners tonight to have Cleveland Avenue closed between Main and Wall streets for cranes and equipment beginning Monday.

“The contractor told me he wants to close the street on Monday,” Branham said, “and get everything set up.”

Installation of the new aluminum and fiberglass tower, with gold leaf in the cupola, is expected to take about a week.

Branham said the courthouse roof is ready for the new tower to be installed when it is delivered. The tower is being built in three sections.

The bell will not be reinstalled, Branham said, but the clocks will function. The clock faces will be backlit and there will be spotlights on the tower as well, he said.

The tower was originally scheduled to be installed in April, but the completion was pushed back by the manufacturers. The tower replacement costs about $772,000, including a private donation for the gold leaf. The project was funded by a bond issue, which also financed new breathing apparatus for the Clark County Fire Department and equipment for the Clark County Road Department.