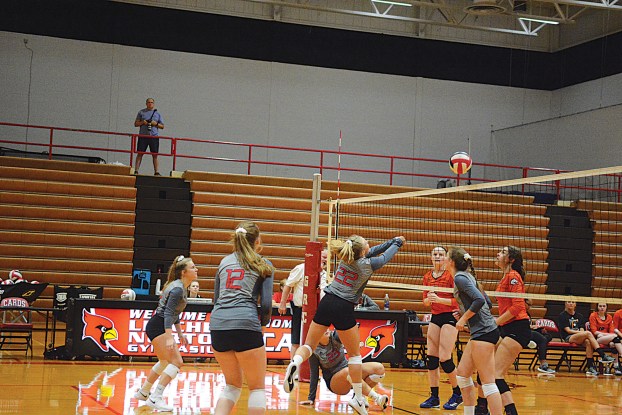 The Cardinals got off to a hot start beginning the match with a 6-0 lead but quickly cooled off and the Broncos ran away with a 3-0 sweep.

Despite the loss, head coach Jessica Bryson said she saw many great qualities in her team that she did not see last year.

“They do not look to me as much,” she said. “Last year, they were coming into a brand new program and were relying too much on the coaching staff. This year, even though my girls need a bit more time to develop, they really look to each other. They have really become more confident in their abilities. They are able to step out on the court by themselves and know what they need to do and what they are doing is something I did not see last year. They are a good group of girls. I think that is a good dynamic that we have. Not only do they spend time together on the court, but they spend time together off the court. That is something that will really help the team later down the road.”

Bryson said besides winning matches, she hopes to impact her players by allowing them to grow.

“We want them to be able to grow as players,” she said. “We have got the skills to grow mentally and physically. The main thing is learning how to be competitors and not just playing the game of volleyball. It is about playing against somebody and we want them to understand that.”

Bryson said she plans to push her team to the next level to accomplish not only a district title, but win out the region.

“Looking at the season, I’d like for them to progress from last year,” she said. “We won district last year then got beat out first round of region. We have to take the steps to make it through each round one match at a time and go to state. If we can buckle down, focus on the things we need to improve on with the team that we have, and keep moving forward, then we will be able to accomplish that.”

Bryson said she wants her team to improve on how they communicate with one another during the match.

“We definitely need to work on communication,” she said. “We are really good at calling what is happening. I want them to think two steps ahead of the game. It is like playing chess. I can see how the ball is moving in the air and where it is going to go, but I want them to be able to tell beforehand. See the set and see the people on the court. Communicate with other during the game while it is going on instead of calling out ‘mine’ or a free ball. We need to cover more ground more effectively as well.”

The Cardinals will have a quick turnaround as they will have two matches Saturday.

Bryson said she plans to have her team quickly forget about the loss and focus on what is next.

“The game is played at angles,” she said. “Finishing with heart, hustle, and grit is what I will continue to tell them before and after each game. Focus on one thing at a time and move on to the next.”

GRC will face Lexington Catholic at 9 a.m. and then Elizabethtown at noon Saturday at Campbell Jr. High.