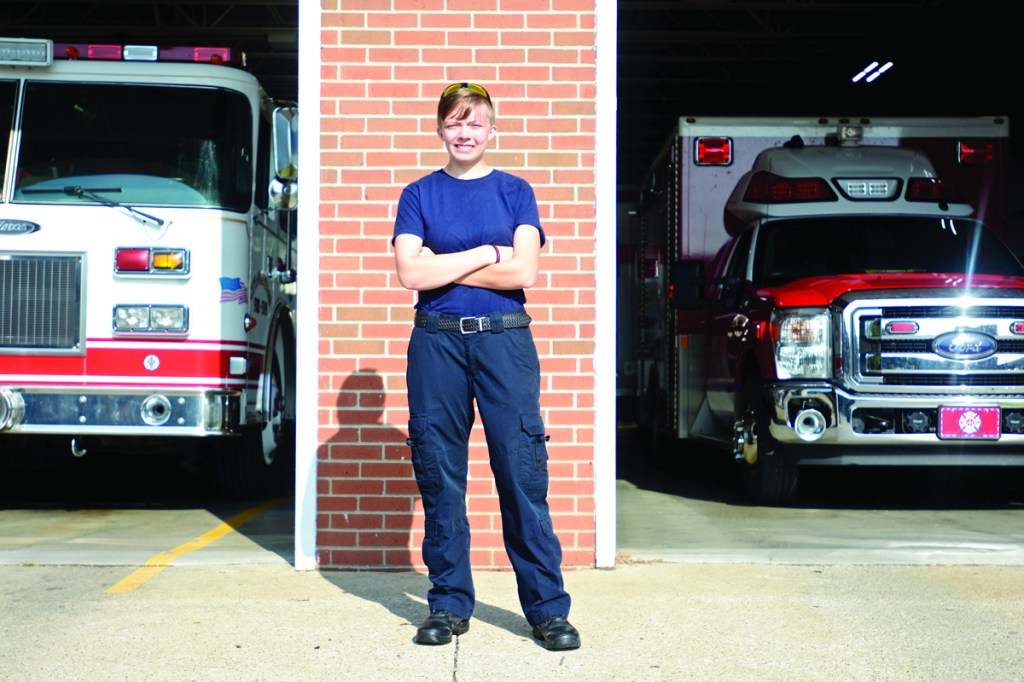 Katelyn Byrd, 18, works at Fire Station No. 1 as an intern; she trains on the job by doing ride alongs and assisting on runs. Byrd said she plans to continue her education and getting certifications to rise in the ranks and work full-time as a certified EMT and firefighter. (Photo by Lashana Harney)

At the start of her senior year at George Rogers Clark High School, Katelyn Byrd was curious if she could co-op with a local fire department.

It turned out no one had ever asked before.

But that didn’t stop Byrd from trying. She collaborated with several entities. After a few months, the paperwork was finished, and Byrd could get to work as an intern at the Winchester Fire-EMS.

Rigney said she was impressed with the proposal Byrd brought to her and she could see the passion Byrd had. So, it was evident she had to help.

“I think with the fire department and stuff we are always trying to help with the community,” Rigney said. “ If someone comes to us and they express their interest, we do everything we can to help.”

Rigney said there were a lot of technical hoops to jump through such as parent consent, checking insurance coverage, school schedules and more. Throughout the whole process, Byrd never gave up.

“She saw something she wanted and saw an avenue and kept trying and working for it,” Rigney said.

But after it was set up, it was all uphill from there.

Rigney said Byrd paved the path for other high schoolers to intern as well.

“This is something I hope we can continue to do in the future,” she said.

Byrd said a friend involved in the Clark County Fire Department’s Explorer program sparked her initial interest in the field.

“I’ve always loved helping people,” Byrd said. “And I’ve always loved being active… (My friend) told me about the Explorer program. And I said I’ll go try it out, see what it’s like. And I ended up falling in love with the fire department and all kinds of fire, rescue, EMT stuff.”

Byrd said she ended up attending the weekly classes regularly for about a year and a half. When she went into her senior year, a co-op seemed like a great idea.

“I just started asking around,” she said. “I went to the county station. I came to the Winchester station. I was asking the chief. I said, ‘Is this possible? Can we do it?’ And they said, ‘Well, we’ve never had anybody ask.’”

“Katelyn was a remarkably polite and intelligent and persistent young lady, and the fact that the arrangement happened is a wonderful example of excellent results when our government entities all work together,” Heffner said in an email.

Heffner said the effort was made possible by a collaborative effort between the fire department, school district, city government and Partners in Education (PIE).  “This opened a new opportunity for our students and will likely lead to more such partnerships,” she said.

Heather Abner, a health science teacher at the Clark County Area Technology Center, said Byrd was one of her nursing aide students. All of her students usually do some co-op whether it be at a hospital, doctor’s office or something else. Abner said Byrd’s case was unique because she started earlier than many of the other students.

Abner said it was a collaborative effort between EMS and the school to partner for ride alongs. She said she has had students go on ride alongs in the past.

Abner said she is happy to be a part of letting students pursue their passions early.

“Katelyn was a great student,” Abner said. “She’s going to do awesome at whatever she does.”

Throughout her internship, Byrd said she goes on the ride alongs with full-time firefighters and EMTs at Station 1.

“I would get to respond to calls just like they would,” she said.

Byrd said everyone at the station treated her like she was a regular employee. Because Byrd already has her SRNA (State Registered Nurse Aides) certification, she could take vital signs, monitor patients and do other basic response treatments.

“I think it’s been a great opportunity,” she said. “I think it goes to show the community that if you want to pursue your passion, then go for it. Because if you push and you want it, then you’ll get it.”

Byrd said she also helped advocate for the EMT class that will start at the high school this year. The Clark County Board of Education approved the motion in a meeting earlier this summer.

Rigney said the EMT class would be a great way to recruit and retain employees.

“It will be a huge benefit to us,” she said.

Because of her internship, Byrd said she now knows what she has to do to further move up in the field. She said she plans to attend Bluegrass Community and Technical College to receive her EMT certifications. Byrd said she hopes to work as both a firefighter and EMT.

Byrd said one of her favorite parts about her internship is the camaraderie.

She said it’s also rewarding to be helping people every day.

“The look on people’s face after you’ve helped them I think is the most rewarding part,” Byrd said. “We’ve got elderly that fall, and all you gotta do is help them get back up to their chair. But that makes their day even though you’ve just helped them move from the floor to their chair.”

Byrd said she’d learned a lot while working at the fire department because it is hands-on. She responds to calls, and she even gets to assist on fire calls when needed.

“I’ve gotten a whole lot of insight that I wouldn’t have gotten before,” she said.

Byrd said she also hopes to inspire young women who might think they are limited to certain fields.

“I’ve had a couple of people say, ‘well, you’re a girl, so it’s gonna be a whole lot harder for you,’” Byrd said. “I want to be a role model for other females that have been told that’s a guy’s job. Well, no, girls can do it, too.”

Rigney said Byrd’s story is an example of the teens seeing an opportunity and taking a chance.

“You never know until you ask,” Rigney said. “I’m proud of her, and I think she will have a great career wherever she ends up.”

To think it all started from her being curious, Byrd said.

“Don’t be afraid to ask questions because that’s how I got here,” she said.