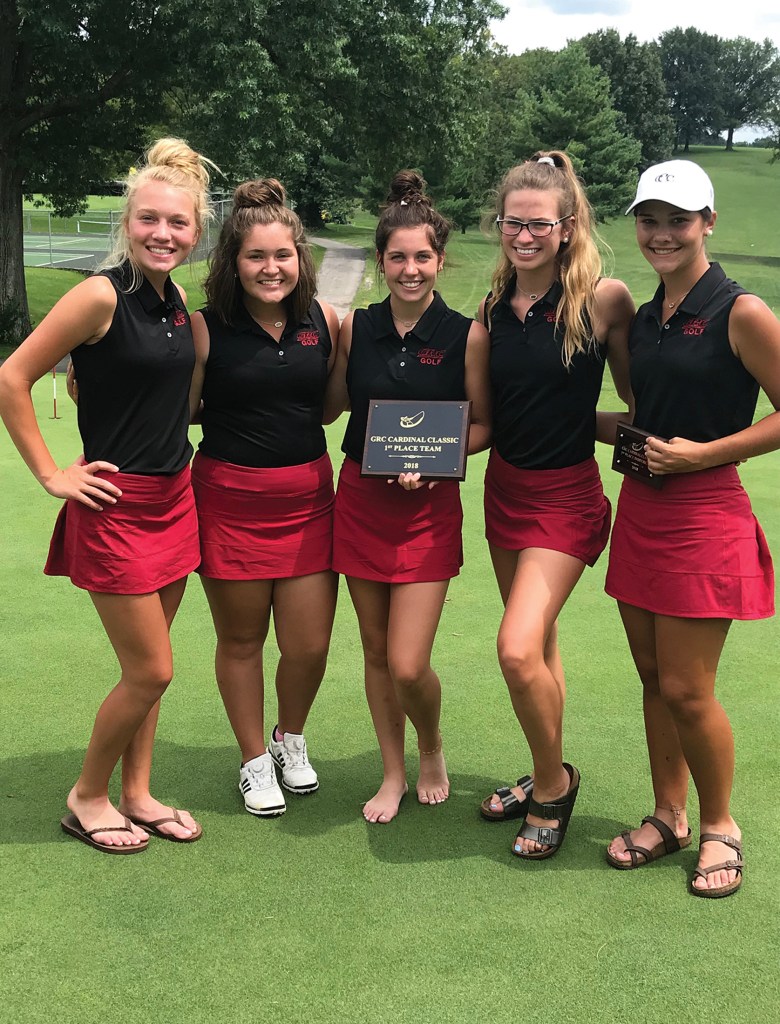 The GRC golf has had a busy summer, but that has not stopped them from seeing early success.

The team has managed to play in eight tournaments the last two weeks with the Cardinals winning the Cardinal Classic last week and placing second at the Danville Country Club on Monday.

GRC went to state last season for the first time in over 20 years and are confident in their chances at repeating.

Coach Scott Franklin has been pleased with how many girls wanted to be a part of the team and how well they have been competing.

“We are off to a good start,” he said. “We have got a good group of girls and have 15 girls on the team which is fantastic. We have a freshman who has played some outstanding golf and led us in a couple of tournaments. There are two sophomores and a junior fighting for a fifth spot. I have got a young, talented team. I am excited that the season has started and we still have room to improve. We have enough as far as girls to fill the team that will allow us to grow in the future. It has been an exciting start to the season.”

There are a lot of variables that play a significant role that could majorly affect a team or player’s performance.

Franklin said he teaches his team to stay focused and to always give their best effort no matter the weather or condition.

“The thing with golf, regardless of the conditions, is everyone has to play the same in the same condition,” he said. “We have played this year in a couple events where it rained this past week. We played at Ryle and we have had two of our juniors shoot their best score. Keeping them focused on the task at hand and remind them regardless of the conditions of the greens or whether it is raining, everyone has to play the same golf course. The more disciplined, focused, mentally tough they are, then the better they can be when dealing with such adversity like the weather.”

Franklin said the tournaments his team participated in are considered practice for the region.

“We have expected to have some returning players be prepared to the next level,” he said. “We want them to be able to show some leadership for some of the younger girls who came out. We have several eighth and ninth graders, and some sophomores. The more you play, the better you play. The greater responsibility is you have to show the younger girls what it takes to get better. How you spend time practicing, what you do off the course, practice on your own all makes a difference. Doing what you need to do helps them and help the team.”

“I have had girls practicing and all summer and I have had girls who did not, so they know what it takes now. I am trying to get across them that they do not need to have anyone holding their hand, but they are starting to understand that now.”

Franklin said golf is also a mind game. One of the biggest struggles is maneuvering your clubs and walking long distances.

He said he does all he can to help keep his team motivated through adversity.

“Golf itself is a very difficult game,” he said. “You walk anywhere from six to eight miles a day. Determination and focus has to be there at all times. When your mentality is not there, you miss out on shots. It is not reactionary like other sports that need quick reactions. Golf is methodical. It is more of a thought process as you reach your shot. It is a process that requires your mental attention at all times and thats the biggest thing about golf. You are walking, carrying or pushing your clubs and it can become draining.”

Franklin is confident this season could create a new era of golf for GRC to build on.

“I am tickled to have the girls I have,” he said. “What we want to try and do here is build a program to build upon. You can not build upon golf unless they start younger. We have built excitement about what we have been doing and people have been seeing what we do. Building the program allows others to come out and be a part of that. Everyone is playing their part and role.”

GRC will be looking to become back-to-back region champs and be a known force at state.