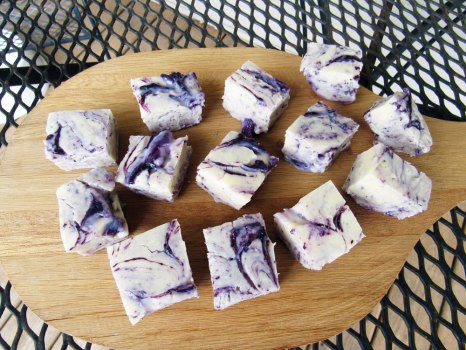 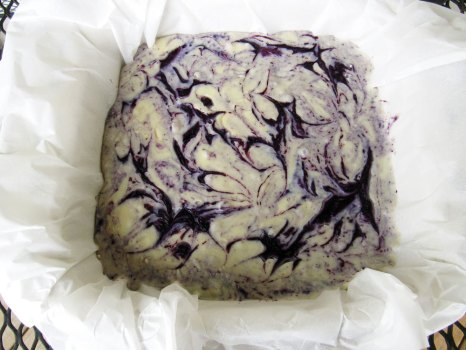 I suspect I found today’s recipe while looking at Facebook because when I came across it in my dessert folder, it didn’t say where it originated.

The only way I can give the author credit is to let you know within the commentary the author mentions if someone tries the recipe to snap a picture and to tag it to #bakerbynature on Instagram.

For pie filling: In a small sauce pan, combine blueberries, lemon juice and cornstarch; bring to a simmer over medium heat and cook, stirring constantly and gently smashing the blueberries smooth, until thickened into a deep, dark blueberry reduction, about 10 minutes. Remove from heat.

Place a fine-mesh strainer over a small bowl and push the puree thorough, leaving any skin or large chunks behind. Be sure to scrape the bottom of the strainer, which catches a lot of the puree. Set aside until needed.

For fudge: Lightly grease an 8×8 inch baking pan. Line the pan with parchment paper, allowing the excess paper to hang over the sides; set aside.

In a large heatproof bowl, combine the sweetened condensed milk, white chocolate, butter, and salt; set aside. Fill a saucepan with water — about 1/4 full — and bring to a boil. Reduce the heat to barely a simmer. Place your heatproof bowl holding your ingredients on top of the pot. Stir frequently, until the white chocolate has melted and the mixture is completely smooth, about 10 minutes.

Using a sturdy spatula, scrape the fudge into the prepared pan and smooth the top. Dot the remaining blueberry pie filling on top of the fudge and use a toothpick to marble it into the top of the fudge. Refrigerate for at least two hours before slicing.

Gently run a butter knife around the edge of the pan to loosen the fudge. Remove the fudge and transfer it to a cutting board. Peel off parchment paper, then slice the fudge into small pieces. Serve at once or store in the refrigerator for up to a week. You may also freeze the fudge in an airtight freezer safe container for up to two months.

After last week’s “best-ever blueberry cobbler,” I still had some blueberries in the refrigerator. Since the recipe only needed a cup of them, I decided I might as well give it a try.

I had never made fudge and was hesitant because I’ve heard it can be difficult.

But I was willing to try.

One cup of berries went into a small pan with the lemon juice and cornstarch. I turned the stove to medium and began to stir. The mixture was thick, so I started trying to mash the blueberries to get some of the juice. That was harder than I thought it would be.

When I finally got them mashed, the mixture started sticking to the bottom of the pan so I turned the heat down and just kept stirring.

I didn’t think the blueberry mixture ever looked like pie filling, but when all the berries were mashed and it had been on the stove at least 10 minutes, I scraped the mixture into a strainer and began to stir it, mashing it through the strainer. This took more time than I thought it would, but maybe it was because I was trying to get every last drop of the filling through the darn thing.

Finally, I gave up and hoped I had enough for the fudge.

I always heard you should make fudge on a clear, cloudless day if you want it to come out right. The day I was making this fudge the sky was a pretty blue, with just a few clouds.

I put water on the stove, and when it started boiling, I turned the heat down to low and placed the top part of the pan on it with the fudge ingredients. I stirred constantly and finally, all the chocolate melted.

I kept stirring until it was completely smooth. I poured in most of the blueberry pie filling and gently folded it in about four times, trying to make sure I didn’t over mix it. As hard as I tried, I think I did over mix just a tad.

I scraped mixture, which was incredibly thick, into my 8×8 dish. It looked pretty smooth to me, so I dolloped the remaining pie filling on top and tried to swirl it around with a toothpick. It didn’t swirl like I wanted, but I did the best I could before placing the dish in the refrigerator to cool.

I checked on the fudge after two hours, and it wasn’t hard. I left it in the refrigerator overnight and the next morning when I checked it, it was firm, but still not hardened.

After I got the paper off, I turned the fudge right side up, found a large knife and began slicing it into small squares. The fudge was a bit sticky, and it wasn’t as easy as I thought it would be to cut.

I placed the pieces in a parchment paper-lined container and then tested a piece.

I thought the fudge was good, but it wasn’t what I expected. It was a little sticky but I could taste the blueberries.

The fudge was so sweet I knew Brad wasn’t going to eat much of it, so I texted our neighbors, Chris and Rachel, to see if they would be interested in trying it and they agreed. Chris and Rachel both liked the fudge.

We shared more of the fudge with Gail, one of Brad’s co-workers who recently had surgery. She ate a piece while we were visiting with her and said it was good.

All of the fudge that was left in the refrigerator had to go somewhere, so I put a couple pieces in the freezer for another day, sent some to work with Brad and took a few pieces to work for my co-workers.

I changed jobs recently and my new co-workers, Michala, Cody and Blake all liked the fudge. Cody mentioned since it was a little sticky, it reminded him of taffy. Michala liked the fact it was white chocolate fudge and Blake, well he kept trying to come up with the right words to describe it, finally he said magnificent.

Everyone who tried the fudge liked it, so I have to say I nailed it.

I’ll hang on to the recipe in case I want to make it again next year when our blueberry bushes are ready for the picking.