Rosenthal remembered for wit, service to his community 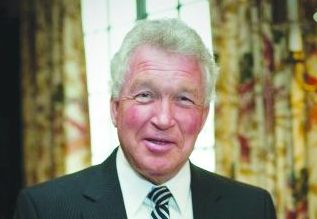 Henry Rosenthal was nothing if not a character.

A native of Winchester, Rosenthal, better known as “Bussie,” was the attorney for planning commission and board of adjustments for more than a decade and for the Clark County Board of Education for 35 years.

Rosenthal was also competitive, regularly hosting pickup basketball games and working to improve his golf game until the very end.

While watching one disappointing George Rogers Clark High School basketball game, Rosenthal reportedly told a friend, “Between you and me, I’m the best shooter in this gymnasium,” long-time friend Ed Mastrean said.

Those who worked with him regularly said Rosenthal loved Winchester and its history.

“When I first came on, he drove me around the city and showed me some of the things he worked on,” Winchester Planning Director Rob Jeffries said. “He was the best planning and zoning attorney I’ve worked with. Every other attorney I worked with, you had to call or email. Bussie would stop by.”

Clark County Schools Supt. Paul Christy received many of those visits as well.

“Bussie used to come and see me. I rarely had to call him,” Christy said. “I always enjoyed and appreciated that time with Bussie to talk about how things were. He was there before I had a chance to call him.”

“He always had a good story that would be a corollary to whatever we were discussing,” Disney said.

Rosenthal was an athlete in his own right, pitching a no-hitter while playing baseball at Clark County High School. According to his obituary, he continued playing softball until he was 65 and basketball until he was 70.

Mastrean said Rosenthal was always working on his golf game as well.

“He loved sports and being active,” Mastrean said. “We used to always go to UK games or Cincinnati Reds games.”

Jeffries said when Rosenthal dropped by the office to check in, he was often wearing workout clothes.

Rosenthal also possessed a vast institutional knowledge of Winchester, Clark County, the school district and planning issues which will be impossible to replace.

“I didn’t grow up in Clark County, but after hearing him talk about the history, I feel like I did,” Christy said. “He had a wealth of knowledge about this community. I learned so much about how to deal with things in the community from talking with him and how things used to be or how they got this way.”

He was also an attorney who tried to avoid situations before they even became problems.

“He was always working to eliminate or avoid any controversies that came up,” Christy said. “That’s what I really liked about working with him. With Bussie, we stayed ahead of the issues and concerns before they became issues.”

More than that, he always had well-reasoned answers and legal advice.

“Even after he retired, on many occasions I called him to talk about different things,” Christy said. “Bussie was there. If you had a question, you got a trusted answer from him.”

“We could count on Bussie to look at those issues and give sound advice,” Disney said.

“He was just a very solid member of the legal community,” Winchester Mayor Ed Burtner said.

“He will be missed and we appreciate his service,” Disney said.

Visitation will begin at 10 a.m. today followed by a funeral service at 1 p.m. at Rolan Taylor Funeral Home.