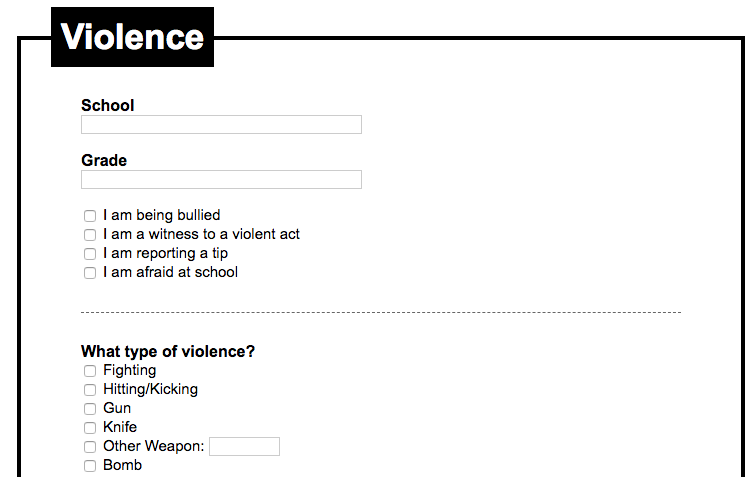 A screenshot from the S.T.O.P. Tipline website shows some initial questions people can use to report violence at Clark County schools. The tipline can also be used to report bullying or other risky behaviors like drug use, self-harm or sexual abuse. Visit the full site at kycss.org/stop.

According to U.S. News and World Report, “one in three U.S. parents fear for their child’s safety while at school” — the highest level of concern in two decades. With parental fear and concern for school safety reach an all-time high, school districts around the nation are cracking down on safety measures.

Supt. Paul Christy said school safety has always been an integral aspect of CCPS’s mission, but the past year and year to come, the focus on safety is at its highest.

Over the summer, the district has implemented multiple safety improvements from additional physical barriers to more resource officers and other supplemental services for students.

“This summer has probably been the largest focus on security, safety and security of our staff and students,” Christy said. “This was a major push.”

Every CCPS employee will be identifiable because of new lanyards that also double as keys to their buildings.

“Every Clark County employee will have one,” Christy said. “They’re all identical so they can be easily recognized in any school by anybody.”

A district-wide system tracks the ID badges, so when an employee scans the keycard to get into a building, the system tracks who they were and what time they entered the building.

CCPS also restricts keycards to certain times of the day for some employees.

“Certain people have certain availabilities to get in buildings,” Christy said. “Not everybody can get into a building 24/7 depending on your job, your title, your responsibilities. We have different levels of access that those badges will allow staff into our buildings.

“We only like people in our buildings based on their need for educating kids.”

If a staff member loses a key card, CCPS can immediately cancel the card and by doing so will render the card useless if someone else were to attempt to use it.

“It would be no value to anybody,” Christy said.

“We went to a new radio system where all the schools can talk to each other,”  Stump said. “They have a main unit where the secretaries sit in the front and the principals have radios, and other different people in the schools have radios too that we feel need one and that can help us. We have a system where if we need 911 … (school personnel can) push a little red button, and it’ll go directly, straight to the Winchester Police and dispatch.”

Stump said dispatchers could listen in real time so schools won’t be waiting for a response and won’t necessarily have to take the time to make a 911 call because someone can do it with the push of a button.

The radios are also tracked and can be limited on capabilities depending on the level of clearance for the person carrying the receiver.

“We have better control of — in case of emergency — who’s on the air and who’s not and we can kind of control the traffic that way,” Stump said.

Stump said the initiative is far-reaching because it’s not just a few radios, it also includes the buses. It was a significant investment, costing nearly $200,000, he said.

CCPS has also added a surveillance system that allows individual school personnel to view cameras in all buildings. Staff can access camera views on an app so some personnel can watch the system on their phones, Christy said.

Winchester Police can also access the camera system so if an emergency situation arises, police can access the system directly and not have to go into a situation completely blind.

The district also numbered every entrance into school buildings and has given the numbers to law enforcement to further strengthen response time further.

Local law enforcement also work in conjunction with the district when it comes to identifying threats on social media.

From there, incidents are assessed and handled on a case-by-case basis, Christy said.

Nationally, the push for school safety not only focuses on weapons and violence prevention but also includes a push for additional mental health services in schools.

Stump said, with that in mind,  CCPS is also working with two additional mental health agencies to provide mental health services to students.

The district had previously been working with Mountain Comprehensive Care, but the Clark County Board of Education unanimously approved two more contracts with KVC Behavioral HealthCare and Bluegrass Comprehensive Care. The board also has an agreement with the National Youth Advocate Program (NYAP), a national provider of mental health services.

“We’ve got a big front as far as school safety goes with how we’re working with mental health agencies to address the students needs as well,” he said.

These agencies will meet with students during school hours to ensure students have access to the services, Greg Hollon, director of pupil personnel and student support services, said.

“We’re also going to work with these organizations to help embed within the school system to where they can receive these services, and they can transition right back into the educational services, and it’s as seamless as possible,” Hollon said. “… That’s the big key is,  if they come to us and provide these services, our students don’t have to leave the grounds, and it sends that signal that you know we’re here to help you.”

All services are provided at no cost to families.

The district also redesigned and developed a new threat assessment this summer that will be a consistent guide in all schools for counselors and other school personnel know how to handle various situations, Christy said.

When someone first walks into any CCPS building, he or she enters a glass vestibule meant to add another layer of security.

This summer, the district made it a priority to ensure all CCPS buildings were equipped with a vestibule including Central Office.

Christy said the vestibules allow school personnel to have a full view of people coming into the building and to talk with visitors before allowing them to enter the building.

Visitors must also be buzzed in from the front doors using an intercom system before coming into the vestibule area, adding yet another layer of security.

“(School personnel) can control who comes in and out of the buildings,” Christy said.

George Rogers Clark High School also has new security gates coupled with the previous procedure of a guard stopping vehicles to write down license plate numbers and ask the visitor’s purpose for being on school grounds. The new security gates cost about $13,900, according to the board’s records.

Christy said he hopes to have that same process at Campbell Junior High School in the future.

All CCPS employees have undergone intense training sessions designed to test readiness in the case of an active shooter situation.

He said these sessions also stress the importance of always keeping doors locked.

During the training, SROs fire fake bullets — though, it sounds real — inside the schools.

“We always make sure everybody hears it,” Christy said.

Students and staff also complete regular lockdowns and emergency drills as required by the state.

Stump initially asked the board to consider approving five additional school resource officers, but the board voted to add three SROs instead. The average annual salary for an SRO is about $42,250.

The board is still in the process of hiring the remaining three SROs, Stump said.

Christy said the goal is to have a security officer in every building eventually.

“We’re going to be able to cover every building this year,” he said. “We’ll have seven so (some SROs) will kind of share two buildings that are close to each other.”

Keith Mullikin, lead school resource officer, said the officers operate much like an internal police department within the schools.

Mullikin said every day is different as an SRO; he starts the day directing traffic and moves on to monitoring hallways, checking the physical security of the buildings, responding to incidents, assisting students and teachers and more.

“We make sure all of us get out to all the schools, so the kids know who we are,” Mullikin said.

SROs also develop relationships with the students and work in tandem with local law enforcement. Many SROs are retired law enforcement officers; one CCPS SRO is a retired wildlife officer.

If students, parents or community members know of an unsafe situation in school — bullying, weapons, drugs or alcohol, etc. — they can anonymously pass on that information to school personnel by using S.T.O.P.

CCPS is now a part of the S.T.O.P Tipline, a 24/7 safety tip line and online prevention program designed for use as an online reporting and prevention tool. The Kentucky Center for School Safety provides the tipline to all participating Kentucky schools.

“Sometimes for students to go and talk to a person about something that in and of itself can be a barrier,” Hollon said.

Hollon said when tragic events take place, one of the most common comments people hear is how they felt powerless, how they thought they didn’t have a voice. He said the S.T.O.P. program could give people a voice.

“I think the design of this is to let everybody know they have a voice, they have a mechanism to be heard,” Hollon said. “I think that’s important. Everybody, students, adults, it doesn’t matter who it is, everybody in our community needs to feel like they have a voice and they’re going to be heard. And once you remove that barrier, I think that opens the door for people to feel comfortable about letting folks know what’s going on in their lives.”

The S.T.O.P. tipline information will be placed on the district’s website, on individual school websites, on buses and more. CCPS will also train school staff and students on how to use the tool.

Hollon said the tipline, however, does not replace the face -to-face open communication and relationships built within the schools.

In the next few weeks, the board will meet to discuss findings from the “On the Table” conversations that occurred earlier this year.

Students across the district discussed a myriad of issues within the school system including school safety. Christy said the board would review those findings and seriously consider the students’ input moving forward.

And while significant progress has been made to strengthen every school’s safety and security, the district is by no means finished.

“We’re not finished,” Christy said. “We’re still looking at other things, some interior safety mechanisms on classroom doors; we’re exploring those. There are still things we’re looking at.”

“There has to be a certain amount of efficiency,” he said. “It can’t be disruptive to the school day just because it’s a safety measure.”

Hollon said it’s a community effort when it comes to keeping the children safe.

“I think sometimes we have a tendency to think kids need us the most when they’re small, and we’re active in the school system when they’re small, but as they get older, that’s not necessary,” he said. “I think that’s a big message to put out as well as to make sure we’re all active in our kid’s lives, no matter how old they are, because they always need us.”

Parents and community members can also help the district be more diligent and aware of what’s going on in the community that may carry over into the schools, Hollon said. The district and parents have the same goal: do what’s best for the children, he said.

And for people without children in school, Hollon said it would be good for those community members also to show support.

“I think we can — together — help our schools to be much safer,” he said.