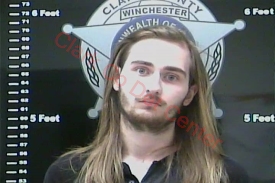 A Winchester man charged with possessing explicit images of minors is now facing a trial early next year.

Vincent Gray, 21, of 419 E. Washington St., trailer 5, was arrested in October 2017 on one count of distribution and 20 counts of possession of matter portraying a sexual performance by a minor following an investigation by the Kentucky State Police.

Thursday, Clark Circuit Judge William Clouse set Gray’s trial to begin Feb. 25, 2019 in Winchester. the trial is expected to last three days. Each charge carries a sentence of one to five years upon conviction.

According to court documents, state police received a tip from the National Center for Missing or Exploited Children about an image which was posted online in a chat room. Detectives tracked the IP address that posted the image to 419 E. Washington St. The KSP Electronic Crime Branch determined Gray shared the images online.

Gray reportedly admitted to police that he possessed the images at one point and shared them online, according to court documents.

Detectives executed a search warrant on Oct. 26, 2017, and seized three computers, a hard drive and a cell phone. Gray was also arrested.