GRC squeezes by LCA for first win of the season 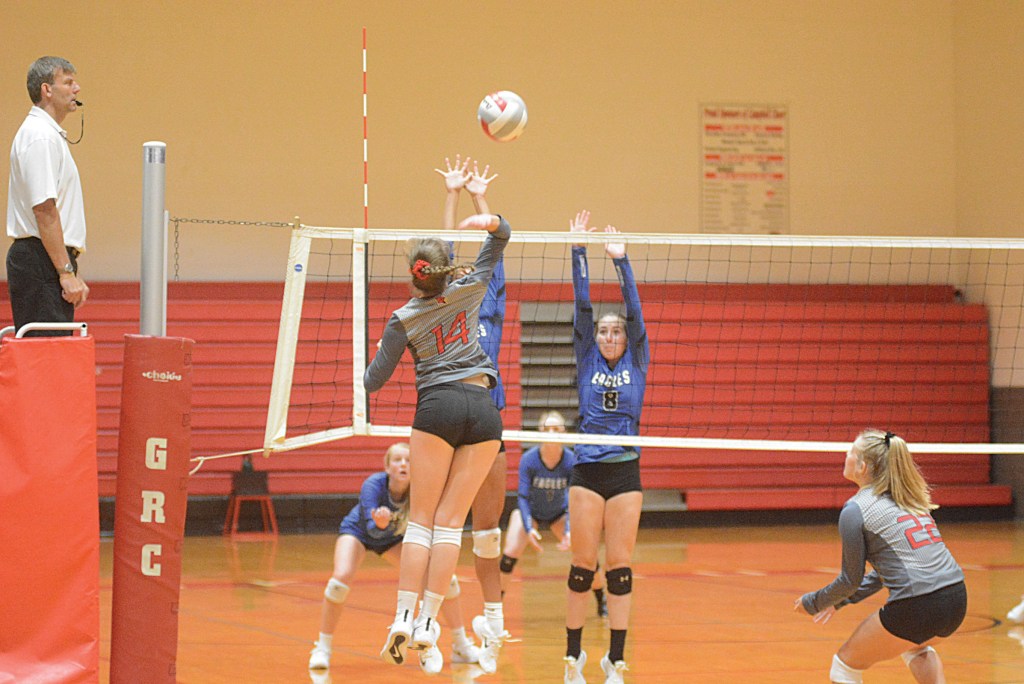 Emma McQuade spikes the ball for a kill in GRC’s victory over LCA Tuesday. (Photo by Micah Satterly)

George Rogers Clark came out with a victory in a tight-knit match against Lexington Christian Tuesday.

GRC looked as if it had the broom out early for a sweep as they took the first two sets with ease.

LCA quickly marched back, winning the third and fourth sets showing the fight was not over.

The teams traded points the entire fifth set until GRC finally came away with a 17-15 win to seal it.

With the victory over LCA, the reigning 40th District Champions in Clark County picked up their first win of the season after struggling through the weekend.

GRC lost in the home opener to Frederick Douglass Thursday and added losses against Elizabethtown, Collins, and Lexington Catholic Saturday.

The Cardinals are now 1-4 in the early stage of the season and head coach Jessica Bryson said her team’s start to the season has been no surprise to her.

“The season that I had started for them was picked up for a reason,” she said. “We knew the first four or five games were going to be tough competitors. This program beat us last year so we wanted the competition to keep building us up to be better. With this first win, it really means something. To be honest, this win was not in the books for us. To get a win against someone we were not expecting like LCA definitely shows we can compete with the best if we set our mind to it.”

Bryson admits she was becoming anxious as LCA took over the third and fourth Sets “With confidence, but said she knows her team does not throw in the towel that easily.

“My girls are a little different than me,” she said. “They have got to stay calm. When they get too aggressive, they work too hard and overplay the game. Keeping them calm and making them concentrate on contact and their job is where I tried to keep their heads at. Keeping their heads throughout the game is what gave them a good focus. Focus, form and concentration are what I preach to them.”

Bryson said she already has an agenda for Wednesday’s practice to keep the momentum going.

GRC will return home Thursday for a match against Frankfort at 7 p.m.