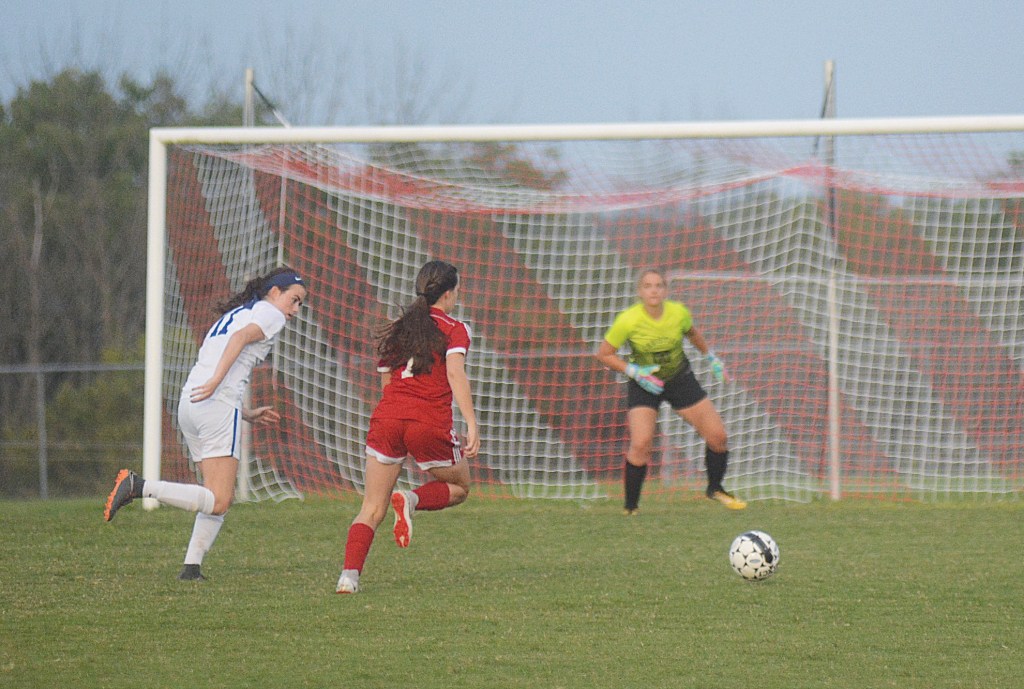 Allie Bush sets herself up for a shot and finds the back of the net giving GRC the first goal of the game in Wednesday's 2-1 win over LCA. (Photo by Micah Satterly)

George Rogers Clark got their first win of the season Wednesday against Lexington Christian Academy at home in a physical match 2-1.

GRC controlled the tempo throughout the entire first half.

The Cards fired the first shot of the game eight minutes into the match shortly followed by a goal minutes later by left midfielder Allie Bush.

LCA thought they had an answer with 20 minutes left in the first half hoping to tie the game but the goal was called back for being offsides.

GRC continued to control the pace of the game and fired multiple shots rattling the cross bar.

Finally, forward Delaney Manning found the back of the net nearing the end of the first half allowing GRC to be ahead 2-0.

LCA had a few opportunities to capitalize in the first half, however goalkeeper Brooklyn Johnson refused to let them on the scoreboard.

After the half, LCA gained momentum and was able to get on the scoreboard with 11 minutes left in the game.

The Cards kicked off their season Aug. 13 in a 2-3 loss to Madison Central, but head coach Matthew Abner said his team let the game slip away which is something he felt they did not do against LCA.

“The momentum from that game carried into this one,” he said. “We did not take our first loss “As a big negative because we knew at that point we could play at a higher level. We did not give our best effort against Central.”

The Cardinals have a quick turnaround as they have another home game Thursday against Corbin.

Abner is encouraging his team to rest and hydrate.

“They need to drink plenty of water,” he said. “They need to eat healthy food and hopefully they come in ready. We have done two-a-days for three weeks and we have come in and practiced up to this point to have back-to-back games and I feel they are up for the challenge.”

It was a tough earned win for the Cardinals as both teams were very physical.

Abner said his team relied on experience to snag their first win of the season.

“A lot of the girls that were on the field tonight played last year,” he said. “We have done a lot of character and team building before each practice. It seems like the more we were able to become closer as a team has helped us focus on getting the win and being competitive. We teach our players to stay in character.”