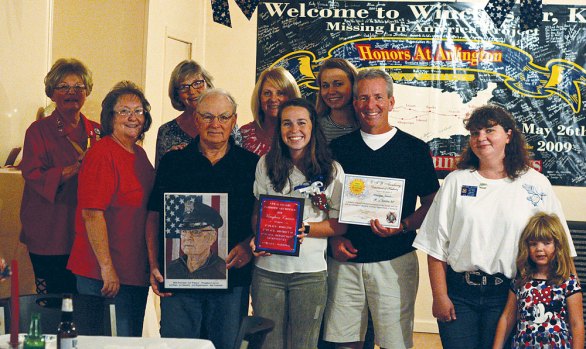 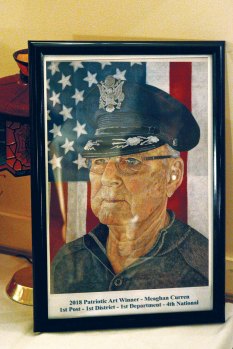 Meaghan Curren's portrait of her grandfather, Dick Gould. The colored-pencil drawing won first place in the district and in state in the annual Veterans of Foreign War (VFW) patriotic art contest. The drawing also placed fourth in the national competition. 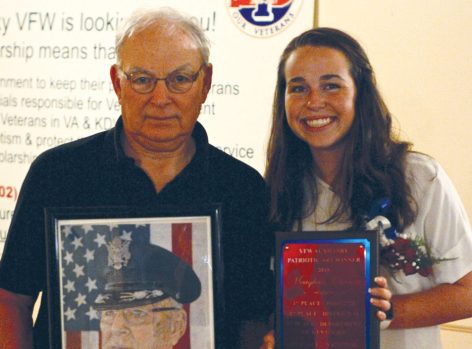 Dick Gould and Meaghan Curren pose for a photo. Curren drew a picture of her grandfather, Gould, for a Veterans of Foreign Wars (VFW) contest. Her drawing placed first in the state as well as fourth in the national competition. 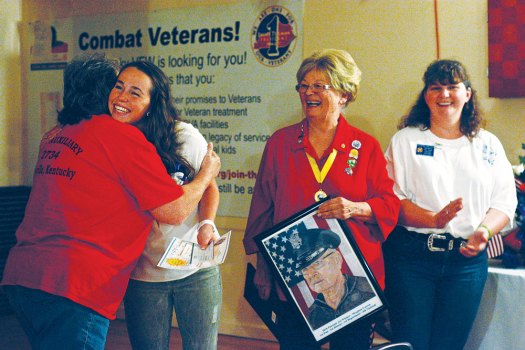 VFW announced winners in July at the National Convention in Kansas City.

“It feels good to be recognized, especially from a small town,” Curren said.

The annual Young American Creative Patriotic Art contest is open to students in ninth through 12th grade. Each year, more than 3,500 high school students from across the country participate in the competition, according to the VFW website. The contest began in 1979 to recognize up-and-coming artists and encourage patriotism in youth.

The local VFW Auxiliary works with the high school to promote this program.

Artists must depict a composition of “patriotism expressed in art.” 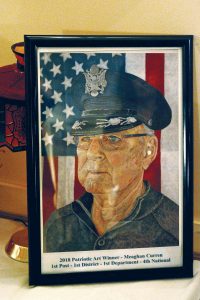 Meaghan Curren’s portrait of her grandfather, Dick Gould. The colored-pencil drawing won first place in the district and in state in the annual Veterans of Foreign War (VFW) patriotic art contest. The drawing also placed fourth in the national competition.

Curren said she also chose to draw a picture of her grandfather, Dick Gould, because she wanted it to be more personal. She had her grandfather try on various hats and pose in front of an American flag while she took pictures from multiple angles.

Curren’s entry won first place at the local level at the Winchester VFW Auxiliary Post 2728, then took first honors from the District 10 Auxiliary.

At the Department (State) Convention in Louisville she, again, won first place.

The state submitted her artwork as Kentucky’s entry in the national competition where she won fourth place honors and a $1,500 scholarship.

Curren was honored Tuesday at an awards banquet at the Winchester VFW Post, where her winning artwork will be displayed.

Her parents, Tom and Cathi Curren, and grandparents, Richard and Vera Gould, all of Winchester, accompanied Curren during the awards ceremony.

Curren had previously entered the contest the year prior as a junior in high school. She had submitted a charcoal drawing of a soldier. That drawing also won first place at state.

Curren entered the contest in 2017 as part of a class project, but this year, she chose to do it again without any prompting from her teacher. She spent about a month working on the drawing.

For the 2018 contest, Curren said she chose colored pencils because that was the medium she was most comfortable using.

“I knew I wanted to do it in color,” she said. “I thought it would stand out a bit more to the black and white, and I’m most experienced with pencil, so I felt like I had the best control.”

Curren said she started developing her drawing hobby at the start of high school and continued in the Fine Arts Cohort at GRC, taking a total of six art classes throughout her high school experience.

Curren is beginning her freshman year at Transylvania University on an academic scholarship where she plans to pursue political science and join its soccer team. Her additional award from winning the art contest will also go towards her education which she might use for books, fees and other educational expenses.

She said she plans to continue her hobby of drawing and painting in her free time. She’s even considering an art minor, but she’s not locked in on anything yet.