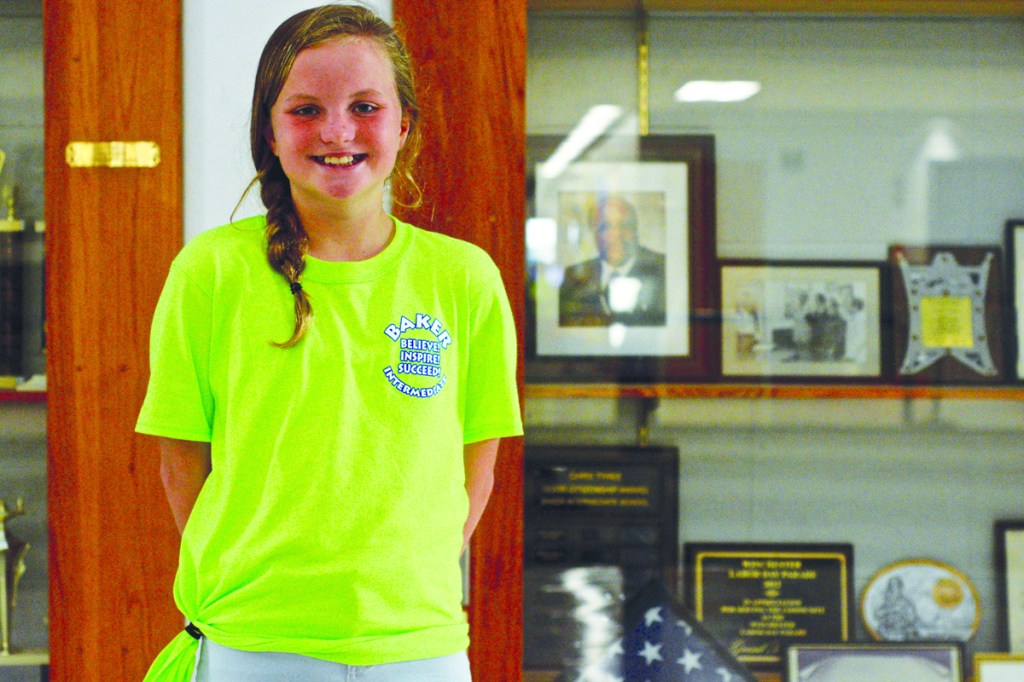 Libby Taylor, 11, is one of many WEB leaders at Baker Intermediate School. WEB leaders are sixth graders who mentor and assist fifth graders.

Libby Taylor, donning her neon green WEB leader shirt, was one of many sixth graders at Baker Intermediate School high-fiving and cheering on the fifth graders Wednesday as the first day of school got its start.

The sixth graders were doing their part as Baker’s WEB leaders, a select group of students trained to be outstanding role models.

Taylor, one of the many WEB leaders, said they spent two days in early August training to become WEB leaders for the 2018-19 school year. Students also had to go through a screening process before being chosen as WEB leaders, which included a written statement portion.

WEB, which stands for “Where Everybody Belongs,” is an intermediate school orientation and transition program that welcomes fifth graders and makes them feel comfortable throughout the first year of their intermediate school experience, according to a news release.

Taylor, 11, said she wanted to be a WEB leaderbecause last year’s leaders helped her transition into the new school atmosphere.

“I was very nervous on my first day,” she said. “I wanted to do the same thing for the new fifth graders.”

The program focuses on students helping students succeed, according to the release.

As positive role models, WEB leaders are mentors and student leaders who guide the fifth graders to discover what it takes to be successful during the transition to Baker.

Taylor, a self-proclaimed extrovert, said she also wanted to be a WEB leader to ensure everyone felt included in their new school.

The WEB Program is entering its eighth year of implementation in Clark County Public Schools, and its fifth year at Baker. Teachers Renee Ware and Amanda Clark coordinate the WEB program at Baker.

Ware said WEB leaders would meet with fifth-grade students throughout their first year at Baker to offer guidance and support. WEB leaders meet with their students at least once a month whether it be to do an activity, join them for recess, eat lunch with them or just check in.

Taylor said she encourages the students to join WEB leaders when they become sixth graders to continue the cycle of helping one another.

Taylor said she is continually motivated by her teachers as well as her fellow WEB leaders and her WEB leader last year.

Outside of school, Taylor takes piano lessons and enjoys swimming. She has two siblings, a chicken, two dogs and guinea pigs. Taylor said she is also helping her mom with the greenhouse they are building.

Taylor said she is excited to be back at school.

“I’m looking forward to getting to know all of the sixth-grade teachers,” she said.

Taylor said it is essential for the fifth graders to have peers they can look up to and ask for guidance. She said she would get to know her assigned group of fifth-graders through games and various activities; the WEB advisers designate every WEB leader to a specific fifth-grade class.

“It can be hard coming to the big giant school with all these other kids from all around the county,” Taylor said. “And so the WEB leaders kind of help you get to know each other.”

Taylor said she advises new students not to get involved in any drama and to do your best in school.

“Just be yourself,” she said.