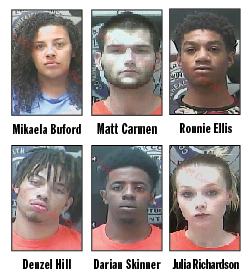 It will be another couple months before a trial is scheduled for a shooting on Washington Street that killed two 16-year-old Winchester girls a year ago.

Thursday in Clark Circuit Court, Assistant Commonwealth’s Attorney Heidi Engel said she recently received the results from ballistic testing in the case, which has been disseminated among the attorneys for the six defendants.

With the ballistic results in hand, Engel said prosecutors were close to having all the evidence in the case.

To allow time for the results to be interpreted, Clark Circuit Judge Jean Chenault Logue scheduled another pretrial conference Nov. 1 with the expectation of setting a trial in the first half of 2019.

Two Winchester teens, 16-year-olds Adrianna Castro and Kayla Holland, were killed in a Nov. 7, 2017, gunfight at the Washington Street Apartments. Police believe the two girls were caught in the crossfire between 24-year-old Matthew Carmen and 25-year-old Denzel Hill, 18-year-old Ronnie Ellis and 23-year-old Darian Skinner. All four have been charged with two counts of murder, one count of first-degree wanton endangerment and tampering with physical evidence.

Winchester Police said the shooting likely was the result of an argument between 10 people earlier in the day, including the victims, Hill, Ellis, Skinner and 18-year-old Mikaela Buford.

Detectives said Buford drove Hill, Ellis and Skinner to the apartment complex around 9 p.m. The three men reportedly got out of the car and started shooting. Carmen told police he returned fire in self-defense.

A sixth person, Julia Richardson, was indicted for tampering with physical evidence for allegedly removing a box of ammunition from the scene.

Richardson is the only one of the six who has been released on bond.