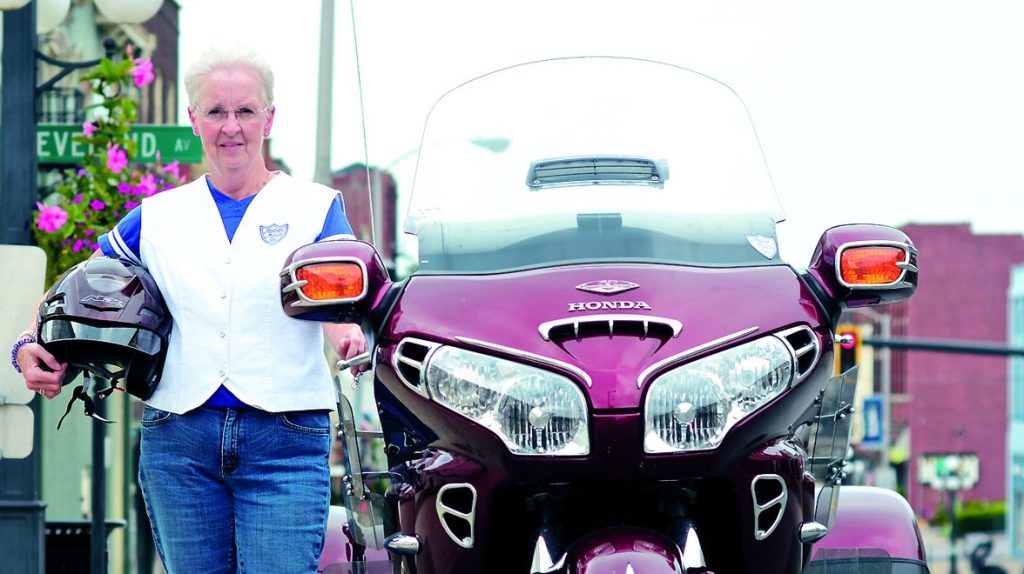 Susan Mullen is a member of Motor Maids, a national organization for women bikers dedicated to practicing safe, fun riding.

By day, Susan Mullen is an executive assistant for Clark County Judge-Executive Henry Branham, keeping the office on schedule and in tip-top shape.

By night, she might be working a shift at the local Kroger, tending to her yard or volunteering with the elderly.

But when the good weather calls, Mullen is likely out riding her motorcycle.

She is a Motor Maid, after all.

Motor Maids is one the oldest women’s motorcycle clubs in North America. Founded in the 1940s by bikers Dot Robinson and Linda Dugeau., it highlights fun, safe riding.

Mullen first heard of the organization when on a “Cruisin for Critters” poker ride in 2014. She was one of two women present. The other woman happened to be the director of the Kentucky Motor Maids chapter.

The two talked about the organization, and eventually, Mullen accompanied the Kentucky ladies on outings, riding together.

“We’re all just like a bunch of sisters,” she said.

Mullen and her Motor Maid sisters recently got back from the national convention in Montgomery, Alabama, to which they made the more than 1,000-mile round trip on their motorcycles. Mullen said it was a hot trip as they traveled the highways in their helmets and gloves and the temperature hovered around 98 degrees.

All Motor Maids attending the national convention must ride their bikes to the location, which changes every year. More than 400 bikers were in attendance this year, though more than 1,300 women are registered members of the organization.

At the convention, Mullen said they participated in a parade, toured the town and met women from all over the country.

Every month, the Kentucky Motor Maids group has an outing together. They plan each month out a year ahead at a meeting in November. This month, the bikers are traveling to Stearns in McCreary County to visit Cumberland Falls and Big South Fork.

“We always try to do something every month, whether or not everybody comes,” Mullen said.

Mullen was raised on a farm, and her stepfather built everything — bikes, go karts, mini motorcycles and more.

Her first ride was on a mini bike her stepfather built. Her driveway was a half mile long, so she was free to ride as fast as she could, letting the dust trail behind her.

Mullen said she always had a passion for motorcycles growing up, and in 2005, she bought her first bike, a Yamaha Virago 750. She’s currently on her third bike — a Honda Goldwing trike. Mullen said she switched to a trike in 2015 after she broke her knee.

“I didn’t want to give up riding, but yet my knee wasn’t strong enough,” Mullen said. “I was afraid it would give out on me on a couple of wheels so that’s how I ended up with the trike and I love it.”

Mullen and a friend recently rode 200 miles around central and eastern Kentucky, traveling through the Red River Gorge.

“It is relaxing to me to get out and enjoy nature,” Mullen said. “Kentucky has so much to offer. There’s so much to see.”

It’s also refreshing to see the sisterhood of bikers, Mullen said. She was frequently told “it’s a man thing.”

“Growing up, it’s been a man’s thing to have a motorcycle and now as independent as women are, and they are getting, it’s just great to see women out there riding,” Mullen said. “It’s not just for a man.”

Mullen said she sees a lot of shocked faces when people find out she’s a biker or a part of Motor Maids. But she said her life would be boring without her sisterhood of bikers.

“I became a widow nine years ago, so if I didn’t have this to get out, I could see myself probably just sitting in the house,” Mullen said. “Now, I stay active. I get out, and I have so many more sister friends that has just blessed my life so much.”

And though her daughter doesn’t always approve, Mullen said she plans to keep riding until she can’t physically ride anymore.

She loves the freedom she feels on the back of a bike, traveling back roads and seeing nature’s beauty with the wind along for the ride.

“I’m going to keep living life to the fullest,” she said.