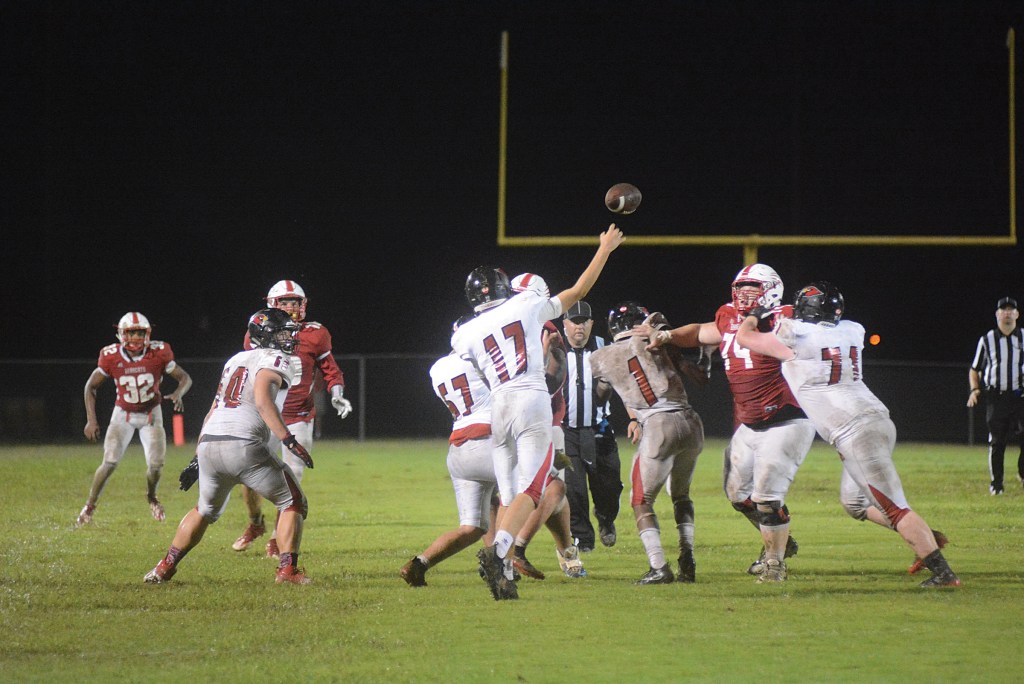 Isaac Graham throws a pass after stepping in at quarterback in the second of George Rogers Clark’s 41-0 loss to Anderson County Friday night. (Photo Micah Satterly)

The GRC Cardinals football faced a tough night on the road against the Bearcats of Anderson County and was dismantled 41-0.

Anderson County received the kick off at the start of the game and quickly added points to the board as they scored on the first play of the first possession.

GRC had a quick first possession gaining only six yards and forced to punt.

The Bearcats answered again with a 67-yard touchdown run putting the score to 14-0 within the first few minutes of the game.

The Cardinals had costly turnovers in the game which helped put the game in Anderson’s favor even more.

Once GRC looked as if they gained momentum after converting a fourth-and-four, a fumble allowed Anderson to recover and score on their next possession putting the Bearcats up 21-0.

A muffed punt by the GRC receiver allowed Anderson to recover and put up a 28-0 lead right after halftime thanks to a 25-yard touchdown pass to bring the game out of reach for the Cardinals.

The Bearcats ran away with the game from there with ease.

“Tonight was fool’s gold,” he said. “If we played that team ten times we would beat them nine. We just did not execute. The kids looked like deer in the headlights. We did not do the things that we were taught.”

Despite the opening night loss, Lucas said Friday’s game against Anderson does not prove anything and is determined to make a difference for Cardinal football.

Lucas said his team plans to wipe the slate clean at practice next week.

“The first thing we are going to do is get back to the drawing board,” he said. “We are not going to make any wholesale changes. We just have to do the things that we do. We need to go back and get to the basics.”

Lucas admits the loss took his staff and himself by surprise because of how well they have been preparing up to this point.

“We had excellent practices this week,” he said. “There was nothing you could have told me to convince me this would be the score. The lights went on tonight and everything suddenly changed. Real bullets started flying.”

Lucas is convinced Friday was not the Cardinals’ night and plans to keep the game plan the same during practice to prepare for next week’s game.

Leading rusher for GRC was Nitavius Thomas with 20 for 67 yards.

GRC will head to Harrison County next Friday Aug. 24.