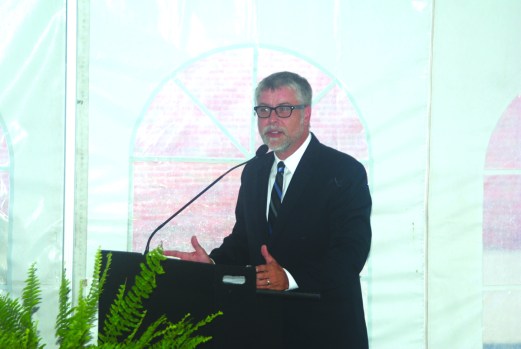 Winterwood Property Management CEO Mike Hynes speaks Friday morning before breaking ground on $4 millino in renovations to the Brown Proctor Apartments. Hynes said the renovations will include four business spaces on the ground level as well as the 49 apartments. (Photo by Fred Petke) 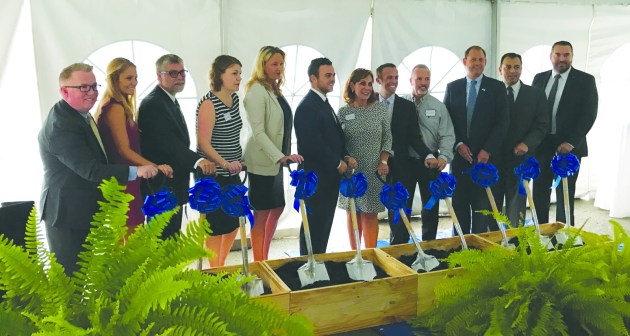 Officials with Winterwood Property Management, U.S. Rep. Andy Barr and state Sen. Ralph Alvarado break ground on a nearly $4 million renovation project at the Brown Proctor Apartments in downtown Winchester Friday morning. Winterwood, which is based in Lexington, is in teh process of purchasing the 113-year-old building. (Photo by Fred Petke) 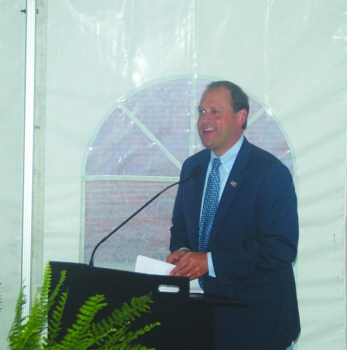 he new owners of the 113-year-old Brown Proctor building unveiled plans for a nearly $4 million renovation to the apartment building Friday.

Winterwood Property Management CEO Mike Hynes said the price tag will exceed $8 million with the purchase of the property included.

The scope of the 10-month project will include renovating and updating each of the 49 apartments, improving the mechanical systems of the building and restoring the facade on South Main Street.

“We look forward to reinvigorating the commercial spaces and hopefully creating some opportunities for local businesses,” Hynes said.

Winterwood is a Lexington-based property management company which owns about 10,000 rental units, he said. The company is in the process of purchasing the Brown Proctor.

The building was built in 1905 as a luxury hotel in downtown Winchester. In 1982, it was converted to affordable housing for senior citizens and adults with disabilities.

“We are extremely excited about what will come with this project,” Winterwood chief operating officer Zach Worsham said.

“Obviously the (project) will result in providing the disabled and senior citizen community with a safe and affordable place to live,” U.S. Rep. Andy Barr said Friday morning. “This redevelopment is the product of the low income housing tax credits. This is a terrific program … because of it is a terrific way to attract private capital for public housing. This is going to provide a better quality of life.”

Kentucky Housing Corporation Executive Director Edwin King said there will be $588,000 in tax credits which can be leveraged into a $5 million investment for the project.

Hynes said the Brown Proctor is home to about 49 people. Some of those may be temporarily relocated during the renovations.