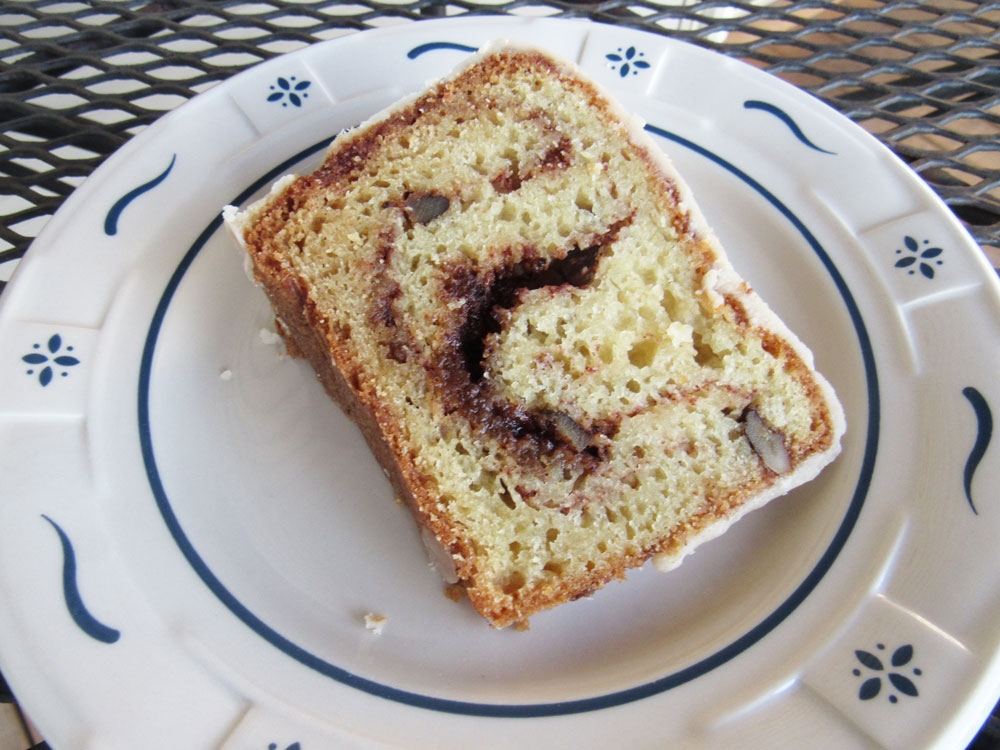 In a small bowl, mix all filling ingredients and set aside.

In a medium bowl, mix flour, baking powder, baking soda and salt and set aside.

Spread 1/3 of the batter (about two cups) in the pan. Sprinkle with 1/3 of the filling (about size tablespoons). Repeat twice.

Bake about one hour or until a toothpick inserted near the center comes out clean. Cool 10 minutes and then remove from pan to wire rack. Cool 10 additional minutes.

Meanwhile, in a 1-1/2 quart sauce pan, heat 1/4 cup butter over medium heat until light brown and remove from heat. Stir in powdered sugar and one teaspoon vanilla. Stir in milk, one tablespoon at a time, until glaze is smooth and thin enough to drizzle. Drizzle cake with glaze.

It was breakfast fellowship time again at church and I was once again debating what to take.

All I needed to do was look through my folder of breakfast recipes. One glance through the folder and I knew I wanted to try today’s recipe.

I love coffee cakes and this one by Betty Crocker looked perfect.

Then I started putting together the batter for the cake. After mixing the flour (I used all-purpose), baking powder, baking soda and salt, I put it aside and poured the sugar, butter, vanilla and eggs in the bowl of my stand mixer. I turned the mixer on low and let it go for two minutes. I scraped down the sides of the bowl a couple of times before adding some of the flour mixture and turning the mixer on again, then I scooped in some sour cream, more flour mixturs, then the rest of the sour cream.

I don’t have much patience for alternately mixing things, so I usually only alternate a couple of times.

I’ve got a bundt pan and a tube pan. Even though the bundt pan makes for a prettier cake when done, I opted to use the tube pan because it’s much easier to grease and flour. This recipe only called for greasing the pan, but I didn’t want to take a chance on the final product sticking, so I greased and floured it.

I scooped out about two cups of batter and placed it in the pan, I used a spatula to spread it around a bit then sprinkled six tablespoons of the cinnamon, sugar and pecan mixture on top. I continued the layers just like the recipe said.

I placed the coffee cake into the preheated oven and set the timer for an hour. When the timer sounded, I poked the cake with a cake tester and it came out clean. I removed the cake from the oven and let it cool in the pan for 10 minutes. I’m always a bit nervous when turning a cake out of a pan, hoping it doesn’t stick. This one slid out just fine.

While it was cooling on the wire rack, I started making the glaze.

I melted the butter in a small sauce pan and let it begin to brown. When it was just barely brown, I removed it from the stove and poured in the powdered sugar, vanilla and a tablespoon of milk. The consistency wasn’t smooth enough so I added another tablespoon of milk and continued stirring.

I was just finishing the glaze when the timer sounded, so I started putting the glaze on the cake. It didn’t drizzle, though. I guess I should have added more milk, but it was too late for that. I poured the glaze on top of the cake and spread it.

The next morning before heading to church I sliced the cake and had a piece. Even though the cake wasn’t picture perfect — far from it — I thought it tasted good.

At church we had plenty of food and there were a few pieces of coffee cake left over, which meant Brad would take some to work Monday.

Brad said his coworked who tried the coffee cake liked it. One of his co-workers, Janette, even wrote a little note thanking him for the coffee cake saying “It was delicious. It was very moist, and the icing added just enough sweetness.”

This recipe is definitely a winner and is headed to the cookbook. I’ve made a note to use my bundt pan next time so the cake will look prettier and I’ve also noted the glaze may need a bit more milk.

Our next church get together is an appetizer social. I’ve got to start scouring my stash of recipes to see what I’ll be taking. Stay tuned.