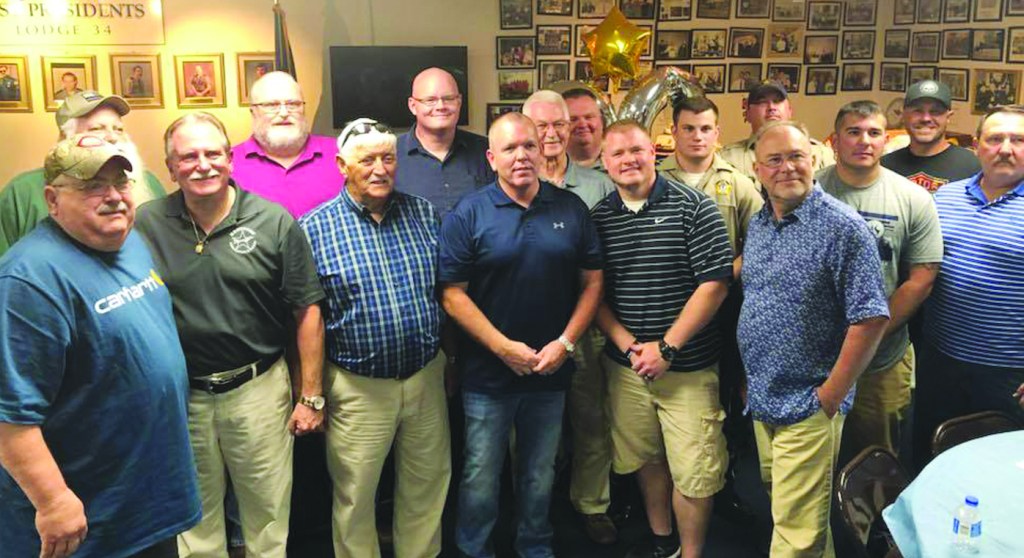 Capt. Paul Howard, center, stands with others from the Clark County Sheriff's Office during his recent retirement party. Howard retired after 20 years at the sheriff's office. His decision to retire was partially prompted by uncertainty around pensions for public employees. (Photo submited)

The changes to Kentucky’s public pension plan have sent ripples throughout the state.

In the last year, and particularly in the last seven months, there has been much angst, frustration, consternation and uncertainty about what the future holds for public servants in the Commonwealth.

Kentucky’s teachers have been at the forefront, but the changes affect everyone working in state or local government, including first responders and those who make local government function.

The changes approved in March will move new employees into a cash-hybrid system, similar to a 401(k) but with a guaranteed return.

For long-time employees, changes to the inviolable contract have caused much concern and worry, leading some to retire earlier than they may have planned in order to lock in their pension payments rather than take chances on future actions.

The situation is far from settled, as the law is now in the court system.

The uncertainty remains, and local agencies are scrambling to find new people to fill spots left by retiring employees. It’s a problem across the state and in Clark County.

Earlier this year, the Kentucky General Assembly passed several measures with the goal of reducing the unfunded liability among its pension programs, including teachers and public employees. The measures, which were finally passed over the course of one day, essentially affected future hires more than current employees.

Instead of being placed in a defined benefit pension, new hires would pay into a cash hybrid system somewhat similar to a 401(k). There would be a guarantee not to lose value, but it is thought to be less secure and lucrative than the traditional pension.

The employee’s age also becomes a factor in retirement eligibility along with years of service.

Teachers would also be capped on the number of sick days which would count toward their retirement.

In December, Louisville Police Chief Steve Conrad told a Metro Council committee his department saw 98 officers retire in 2017. Two-thirds of those, he said, left because of the looming pension situation. That was before the Kentucky General Assembly took any action.

“I’m having to manage with what I have … and we’ve got seven more months of the fiscal year to deal with,” Conrad was quoted as saying by WFPL. “What is so frustrating is we’ve lost a number of great officers to fear over the retirement, and nothing has happened yet.”

Clark County Sheriff Berl Perdue Jr., who also serves as Kentucky’s Fraternal Order of Police president, said he has spoken with Louisville Police officials recently and said numbers of applicants are down substantially as well.

In northern Kentucky, cities have gotten into bidding wars for police officers, raising starting salaries to $60,000 or $65,000 annually, Perdue said.

“We’re all losing very seasoned employees, all because of changes and uncertainty,” he said.

In his career, Winchester Police Chief Kevin Palmer said he has interviewed at least 500 people as potential police officers for the city.

“They never ask about retirement,” he said. “They want to be police. They don’t even ask in the interview. No one’s asked me about the retirement or the benefits.”

Some of that could be attributed to being young and feeling invincible, as well as wanting to do the job, he said.

“Being the police is a calling,” Palmer said. “Until I was captain, I couldn’t tell you what I made on the hour.”

That’s not to say things don’t change as time passes and life changes.

“After they get hired, they may start shopping around,” Palmer said. “At the end of the day, public service is what it is. It’s taxpayer funded.”

“In my recruitment trips around the state and everywhere I’ve been, very few people talk about the pay or the retirement,” he said.

Still, it’s getting harder to find applicants and Arterburn said the state has altered its hiring process to attract more. The training program remains, but now people can apply with a GED or high school diploma and three years of experience.

“This is not diluting what a trooper is by any means … we’re just letting more people try to become troopers,” Arterburn said.

Winchester has streamlined its process a bit as well. Palmer said the department recently had 40 applicants show up for agility testing for five vacancies. Previously, 25 was the norm.

“This was our largest applicant pool in five to 10 years,” Palmer said.

Part of that can be attributed to heavier advertising, but the department is also working with applicants to make sure applications are filled out correctly. Palmer said he doesn’t want a potential quality officer’s application to get rejected for not checking one box.

“We have streamlined the application process,” he said. “If we have limited applicants, we want to help you a little more.”

Still, the changes mean employees will have to work longer to reach their eligibility.

“I have deputies who started after 2013 and they will have to work until they are 57,” Perdue said. “I have one guy who will have to have 32 years in before he can retire because he started so young. “

Capt. Paul Howard retired from the Clark County Sheriff’s Office in July, after working 20 years for the department and three sheriffs during his career. The uncertainty around the pension system and the inviolable contract, where legislators would not be able to reduce benefits for employees, helped spur Howard’s decision.

“I’d thought about (retirement) but my decision came quicker than I expected,” Howard said. “The pension was a major factor in my decision to go on or retire. It’s just the unknown.”

With legal decisions that could affect the law pending, the situation is still very fluid.

“What we’re seeing from our legislators doesn’t give a lot of confidence that they’ll come together to fix this,” Howard said.

“I have a lot of friends throughout Kentucky who have retired earlier than they planned for the same reasons,” Clark County Fire Chief Ernie Barnes said.

As employees with hazardous duty retirement, they are eligible to retire after 20 years of service. At minimum, the county lost 200 years of experience among those retirements.

“Retirements don’t happen that often for us,” Clark County Fire Chief Ernie Barnes said. “To have three within a year is kind of a precedent.”

Experience can’t be replaced, though supervisors can train the next generation to step up when opportunities arise.

“We lost close to 100 years of experience,” Barnes said. “We can teach people to do a lot of things. Somethings you just have to know. When you lose that institutional knowledge, it’s hard to get back.”

This year’s retirements are not unique. There will always be people eligible to retire, or on the cusp, and employees ready to take the next career step.

“Whenever we lose a ranking officer, that creates opportunities for the next generation to step up,” Palmer said. “I always say the next police chief already works here.”

Presently, Palmer has eight officers who are eligible to retire now, and the department is in the process of hiring five new officers.

Barnes is also working to hire new firefighters, but its hard to find the right people. With two battalion chief eligible to retire, Barnes is looking down the road and planning for the future.

“I look at our junior officers and we need to do everything for them to increase their responsibilities and level of training,” he said. “We also have to look for when these people do retire, how do we replace them?”

Recruitment is the next challenge.

“All the retirements have caused a shortage of qualified personnel,” Barnes said. “It’s harder to recruit people because they’re coming into a new retirement system. It’s a less attractive system.”

Winchester Fire-EMS Chief Cathy Rigney said she is eligible to retire now, but it is not on her radar.

“I’m not going anywhere,” she said.

“We have to increase our ability to recruit new firefighters so they’ll come here, stay here and move through the ranks,” Barnes said.