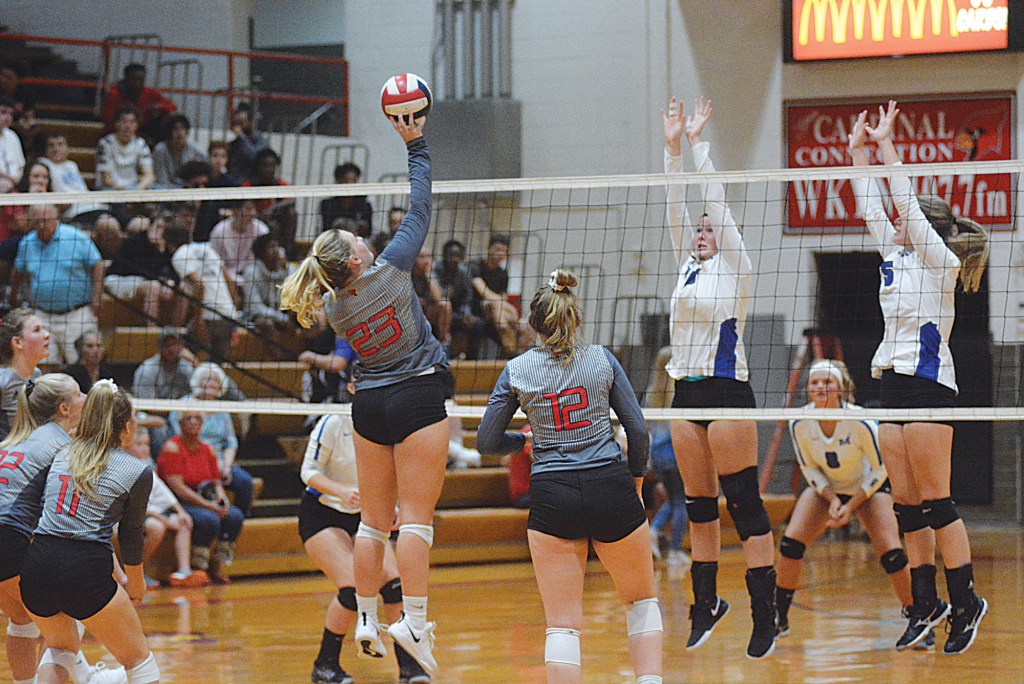 Abby Flynn tips the ball over the net in GRC's victory over Montgomery County Tuesday. (Photo by Micah Satterly)

George Rogers Clark got off to a hot start against their district rivals in Montgomery County that led to a sweep.

After falling in the losing column in their first four matches of the season, the Cardinals have lit a fire and have now won three matches in a row including two sweeps.

Head coach Jesse Bryson said Montgomery County is usually the Cards’ biggest match of the season and had no issue motivating them to come out with a victory.

“Last year this was their biggest game,” she said. “We beat them four times and lost once in the regular season so it was really important for them to come here and try to get the win. Beating them in three sets tonight was really key to our team’s confidence going deeper in the season.”

Bryson said her team’s energy the last three wins has been the difference maker.

“They have came out with an intensity that I was not seeing at the beginning, she said. “They have been competitive, put up a fight to win and not just going through the motions. The first few games we were a little rocky with our rotation and we did not exactly know where to go. We have a lot of new players stepping up in different positions. So learning how to work with each other, talk and communicate when things are not in our comfort zone is what we have excelled at the past few games.”

Bryson said she has not had to force emotions or effort on her team as they have started to figure it out for themselves.

“If I had any way of motivating them, it would be leading by example,” she said. “I try to be in the game as much possible with them. At the end of the day, they are growing up and getting experience in learning how to play the game, and with that, they are getting their own motivation.”

GRC will be on the road the next four matches and will not return home until Aug. 31 when they will face Sayre.

The Cards will travel to Bourbon County Wednesday, Aug. 22.