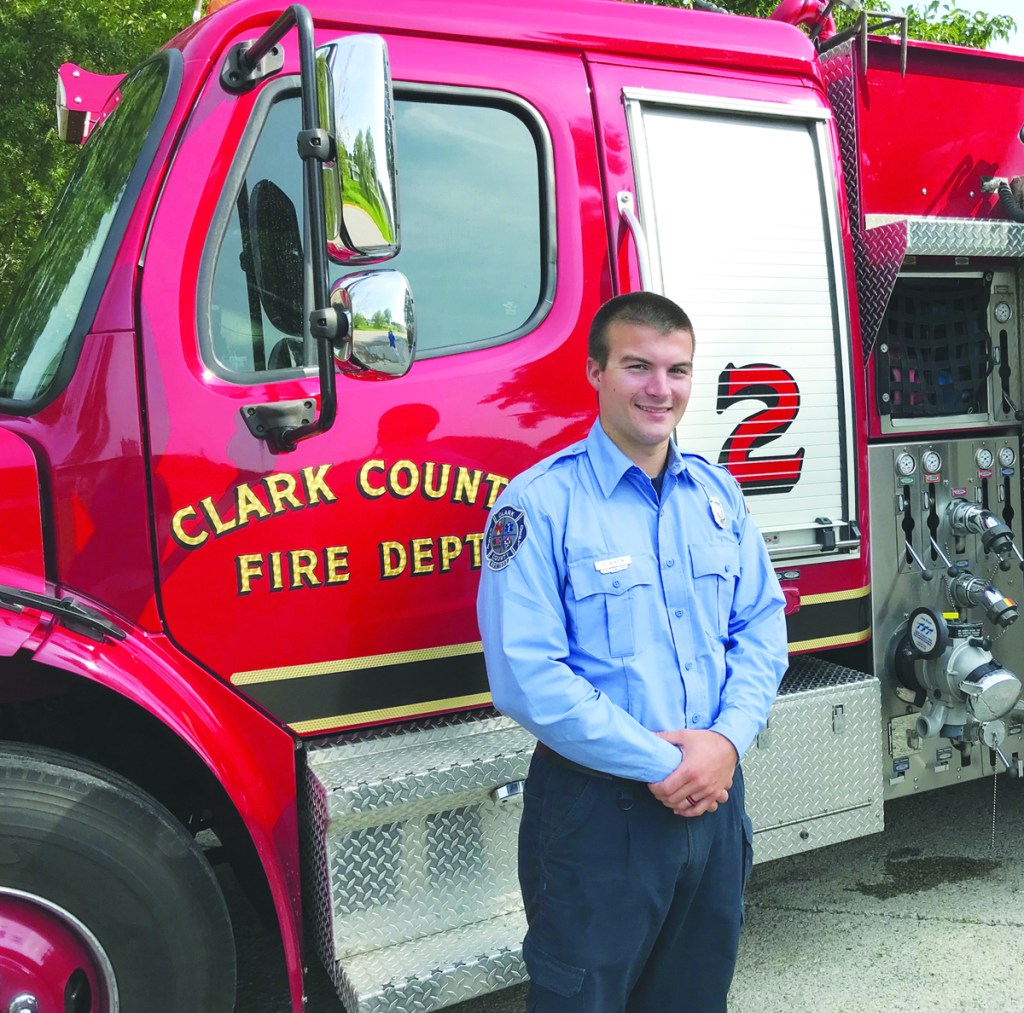 After his friend was involved in a serious vehicle accident as a teenager, Daniel Burton decided he wanted to be there for others in emergencies. He accomplishes that goal now by working at the Clark County Fire Department. (Photo by Fred Petke)

Daniel Burton’s career path changed when he was 17.

His best friend wrapped a Chevrolet Suburban around a tree, about 24 feet off the ground on Escondida Road in Bourbon County.

Local volunteer firefighters responded and freed his friend, who was flown to the hospital with multiple injuries.

“Right then, I knew I wanted to be the one there on your worst day,” he said.

Not long after, his decision was confirmed when he was behind his cousin and another girl when they were in a violent crash as well.

“I was right behind them,” he said. “(The impact) shoved the motor between them.”

Burton was able to free one girl from the car, but the other was trapped for 15 minutes for an ambulance to arrive and another 10 for volunteer firefighters.

“I was first on the scene,” Burton said. “I didn’t know what I was doing. I didn’t help a great deal because I didn’t have the training or the tools.”

“When I got hired, I had 150 hours of basic training,” he said. “Then you have to keep your training up every year.”

Beyond the basic 150 hours, completing another 250 hours of training will make a person a certified firefighter and eligible for incentive pay, which Burton said works out to about $4,000 a year.

In each 24-hour shift, there is usually training of some kind, he said, along with chores around the station and the inevitable emergency calls, he said.

“If you’re hitting it hard and training every shift, it takes about six months (to reach 400) and that’s starting at zero,” he said.

While the job can vary wildly within the scope of a 24-hour shift from doing public outreach programs to covering incidents with serious injury or loss of life, Burton is glad the fire department called first.

“When you come in, you get to know everyone really well,” he said. “It’s another family, especially where we’re a smaller (department). You know everybody.”

He said his shift has “family day” when they work Sundays, for firefighters from all three county stations to eat together, catch up and talk.

In his 48 hours between scheduled shifts, Burton is working on his family farm in Bourbon County.

Burton is married to Whitney and father to 7-year-old Caiden and 1-year-old Addaleigh.