Brown happy to be back at Shearer Elementary 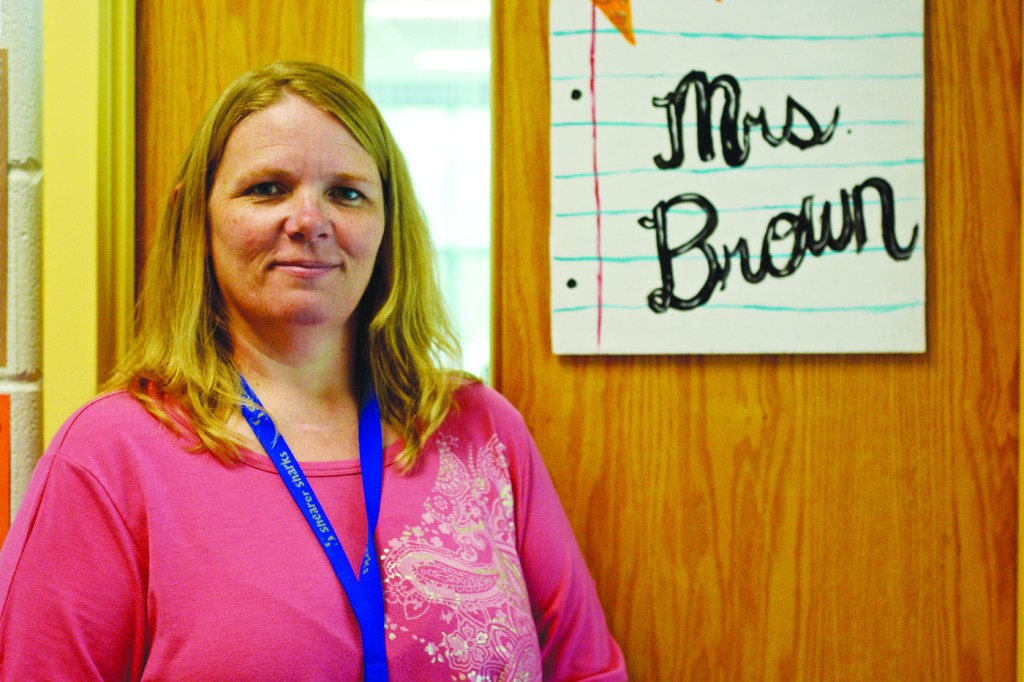 Veronica Brown was an aide at Shearer Elementary School for 10 years.

She had always had the passion for education and working with young children, so she fit in perfectly. She learned from all of the staff and teachers, taking something from each one of one them, and using it to grow.

After spending so much time at Shearer, Brown, a Lexington native, knew she wanted to be a teacher.

In 2006, Brown began taking classes at Eastern Kentucky University. She was a nontraditional student; her children were in elementary school. After Brown was finished with her work as an assistant at Shearer, she would drive to EKU at night. Some nights, she wouldn’t get home until after 10 p.m., only to wake up the next day and do it all over again.

Brown graduated with her bachelor’s degree in elementary education in 2012. She is also currently pursuing a master’s degree at EKU.

Brown is in her sixth year of teaching, and is a second grade teacher at Shearer, where she is often introduced as the teacher Shearer raised.

She has taught preschool, fourth grade and second grade. In the second grade, she teaches her students speaking and listening skills. Students expand their math skills, thinking beyond one plus one and moving into making connections while thinking outside of the box.

“In the second grade, they are on the cusp of being mature enough to handle big kid decisions, but they still appreciate and desire that nurturing, ‘Please, help me’ kind of mentality,” Brown said. “They excel when they learn a skill. They show a great amount of pride in learning the skill.”

When Brown was a young girl, she would stay with her grandfather in the winter. She would be the teacher; he, the student.

Her love for teaching was further solidified when she was 16 years old. She went to church in Lexington with family friends. One day, the church needed a substitute daycare worker for its 3-year-old group. Brown stepped in, and she quickly realized she wanted to do more with children.

“Without that opportunity, then I would not be where I am,” Brown said.

Brown settled on elementary education because she enjoys those “I get it” moments. She had a stronger connection with younger children, and she enjoyed building the foundations for children to lean on as they grow older.

“I like to help them cope with instances such as ‘I don’t feel confident,’” she said.

In her first class, Brown had some “exceptionally bright kiddos” and some “strugglers.” For their first writing assignment, she had her second-grade students write a letter.

She told the students one day they would be sending letters to her, writing to tell her they were graduating from high school and going to college.

But one student, in particular, stood out. He told her he didn’t think he was ever going to college; he wasn’t smart enough, he said. Brown changed his mind.

“At the end of that second-grade year, he said to me, ‘One day, you will come to watch me wear the fancy gown when I walk across the stage and get my big college diploma,’” Brown said. “And I will never forget that. That group is now in the seventh grade. And anytime I see him, he reminds me, ‘Remember, you’re going to come to watch me walk across the stage to get my big college degree.’”

Brown said moments like those remind her why she became a teacher.

Brown said she hopes all of her students remember she truly loves and cares for each of them.

“I want them to become productive citizens,” she said.

One of the most challenging aspects of teaching, Brown said, is worrying about her students when they’re not with her.

“Like all teachers, I worry, how am I going to get them to where they need to be in the short amount of time that we have with them both academically and emotionally, making sure they’re well cared for,” she said.

Brown said it’s also important to remember teaching doesn’t always have to be serious. She tries to keep it fun and engaging.

When Brown was teaching fourth grade, she remembers talking to her students about how people use their senses to explore the sciences.

To demonstrate, she stood on a chair to get on top of a table and began singing and signing “Head, Shoulders, Knees and Toes.”

“We talked about how we’re going to use our eyes and our ears, and we will never put anything in our mouth, and we would touch with our hands,” Brown said. “And as I was singing and they were singing with me, in walks Paul Christy, the superintendent of Clark County Public Schools, and my new boss, and I was mortified. He just smiled. And we went about our business.”

At the end of the semester when the students were asked about what scientists use to explore, every student in the class answered correctly.

“It was extremely embarrassing,” Brown said. “But it worked well.”

Brown said she hopes new and aspiring teachers, as well as her students, learn to be flexible, ask for and receive help, take time for themselves and love others.

Outside of teaching, Brown is involved with community theater. She wrapped “Mary Poppins” Sunday, where she worked as the stage manager. She is also involved with the Shearer Musical Theater program and Baker Intermediate School’s theater productions. Brown is also a summer camp director at Winchester-Clark County Parks and Recreation.

She’s also proud to be married to her husband of 24 years. The couple has two children. Brown said she enjoys singing and wants to learn to tap dance.

Had she not been a teacher, Brown said she might have been working in retail. Both her mother and grandmother worked in retail, and Brown worked in retail before teaching. But she’s happy teaching, especially to be teaching at Shearer.

“Shearer raised me,” she said. “It will always have a special place in my heart.”

Brown said she hopes to retire from Shearer.

She was happy to be back this year after spending three years at Clark County Preschool, which she also loved. But something about returning to Shearer to teach second grade was extra special.

Brown posted on Facebook to announce her return, and she was flooded with happy remarks. One of the custodians, who had known Brown from her previous time at Shearer, stopped by as she was setting up her classroom. “Welcome home,” he told her.