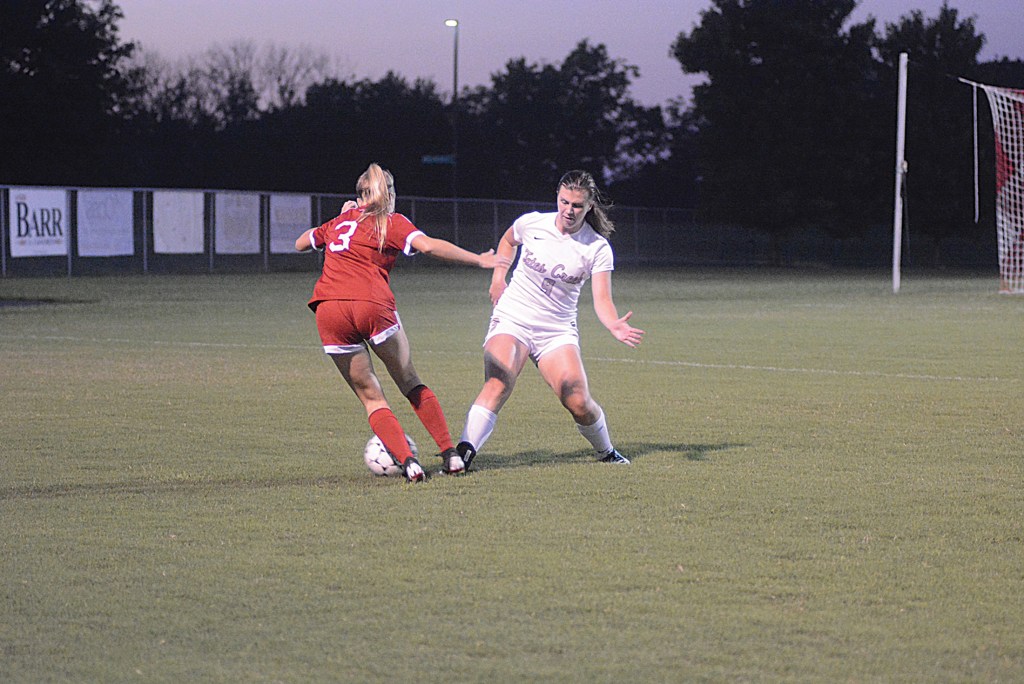 Delaney Manning makes a move on a Tates Creek defender Wednesday. Manning scored both of GRC’s goals resulting in a 2-2 tie. (Photo by Micah Satterly)

The Cardinals did not lose, but nor did they win as the match ended in a 2-2 tie.

The Tates Creek Lady Commodores looked as if they were going to run away with an easy victory as they posted the first goal of the game within the first 30 seconds.

GRC continued to fight after being put in a hole at the start of the game and the Cards finally evened the match with a goal from Delaney Manning at the 30 minute mark in the first half.

GRC quickly shifted the momentum into their favor as Delaney Manning posted her second goal of the game in the first four minutes of the second half thanks to an assist from Allie Bush.

Creek had a chance to seal it with a victory with only seconds to spare to in the game, but goalkeeper Brooklyn Johnson was relentless in the net and refused to let the ball get passed her.

Head coach Matthew Abner said he cannot be disappointed in a tie against a top team in the state and was proud of the effort.

“We played good tonight,” he said. “Tates Creek is one of the legit top teams in the state and they have earned that. We played right there with them the entire time and even led the game for a little while. It went back and forth. We had opportunities that we did not take advantage of and so did they. It was a pretty even match. I thought we looked a little better, but that may just be me being bias towards my team.”

The Cards are currently ranked 25th in the state and Abner said this game will help boost his team’s confidence in knowing they can compete with any team.

“I think it is really good going forward,” he said. “Our growth lets us challenge players to let them know we are not out here working hard to just compete. We are out here to compete with the higher level teams and that is why we play them. We play a very hard schedule with the state champions of last year and multiple region champions. We try to balance our schedule out to play the better teams in the state so that we are ready when it comes around.”

GRC will be headed to Tennessee this weekend to play three games in the Smoky Mountain Cup.

Abner said playing in this tournament will help his team handle adversity, but also wants to focus on the team bonding aspect.

“It is more than just playing different teams,” he said. “It is more so of team bonding. They get to be away from parents for a little bit. We have learned all of us have the same goal. Tennessee typically has a lot more physical-type teams and it gives us an opportunity to play teams we have not seen or heard of. We do trips like this in past years and all they do is go out there and not know what to expect.”

The Cards’ games will be against Greeneville Aug. 24, Stewarts Creek Aug. 25, and Chattanooga Christian Aug. 26.

Games will be played in Gatlinburg, Tenn.