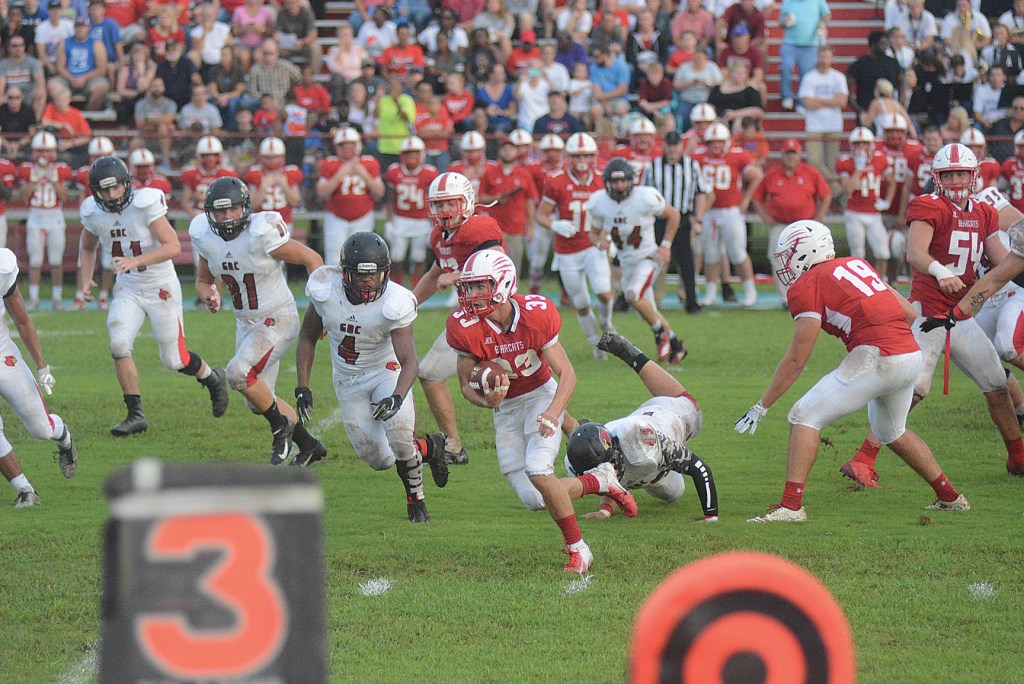 Aquevion Lewis chases down the running back and makes a tackle against Anderson County on Aug. 17. (Photo by Micah Satterly)

George Rogers Clark is on the hunt to get the season on track after falling 41-0 in their opener in a tough loss on the road at Anderson County.

GRC opened the 2017 season with a home game against Anderson resulting in a 27-14 loss.

The Cardinals will be back on the road Friday to take on the Harrison County Thorobreds.

The Breds put up big numbers against Fleming including rushing for 480 yards with three players rushing over 100 yards individually.

Head coach Oliver Lucas said his Cardinals have forgotten about last week’s loss and have been on the practice field working hard.

“Practice has been pretty good this week,” he said. “I can’t complain. Our kids have worked hard trying to bounce back and that is what you try to get done. They are focused, ran well and us coaches have simplified some things for them as well.”

GRC allowed Anderson to score on the first play of the game and was down 21-0 at the half.

Lucas said the mistakes his team made against the Bearcats last week will be corrected this week.

“We have just got to fix mistakes we have been making,” he said. “We will be playing a team that is disciplined and if we do not do the things that we need to do we will get beat. We have got to run hard, out hit our opponent and execute each possession. That is all we have to do to get a win under our belt.”

Lucas said he is aware of how much Harrison used their run game and understands the game will quickly get out of hand if the Thorobreds beat the Cardinals on the ground.

“You have got to play the run because if we do not be sound, we will get caught up,” he said. “They like to run some illusion schemes and then we will be chasing fool’s gold again. If that happens, we will be struggling the entire night.”

Lucas said he has been pleased with how his team has responded at practice despite being blown out by Anderson.

“They have all kept their heads up and have gone hard this week,” he said. “You do not trip on things behind you is what we have been trying to preach to them. We are trying to not over coach them and we want to give them a chance to be successful. Looking back, our approach might have been wrong last week. We have got to give them a chance and figure certain things out on their own. Being over-prepared happens in the first game sometimes and that is what happened to us.”