New pool all about the dogs 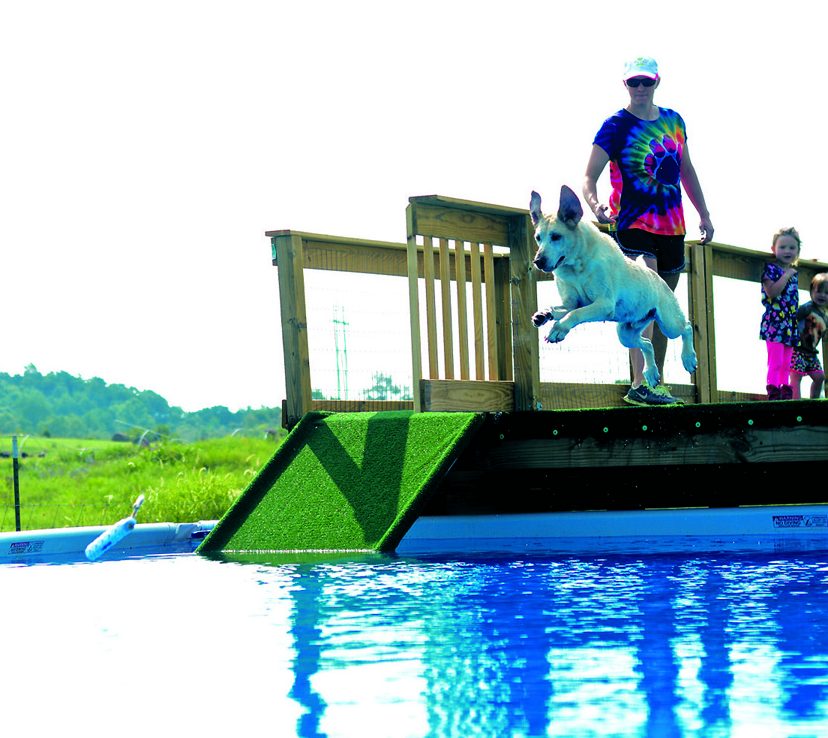 Emily Smith, owner of Prime K9 Sports, throws a stick into the pool as Odie, an 11-year-old retired police canine, jumps into the diving pool to retrieve it.

Odie, an 11-year-old retired police K-9, made quite the splash when diving from the new, non-slip dock into nearly four feet of water to retrieve his toy.

Emily Smith, the owner of Prime K9, said the pool opened in early August, though Prime K9 had plans to open the facility since early last year. The facility’s total cost will be around $20,000, Smith said; there are still some final touches to be added.

Prime K9 will host a NADD trial through Oct. 6-7. Dogs and their owners will come from all over to compete and observe a dock diving and K9 swimming competition. Prime K9’s facility is the only one for about 100 miles, Smith said.

Dog diving is a growing sport, so Smith said she expects a good turnout for the October event.

“It’s only going to get bigger,” Smith said.

Smith started Prime K9 in 2014 and had initially focused on basic obedience training. Because there are many dog trainers in the area, Smith decided to move towards sports. Prime K9 will now concentrate on canine sports.

Smith discovered her love for canine sports when she took Odie to their first diving event in 2016 at a Lexington show.

Smith has been working with dogs since she was about 10 years old. She started in 4-H with her family pet, Lucy, a rough collie. From then on, she competed in several competitions and won many titles.

Smith became the first female certified by the Working Dog Association (GSDCA-WDA) as a regional level helper and decoy. She is also a Canine Good Citizen evaluator through American Kennel Club (AKC) as well as a certified nose work judge with AKC and the United Kennel Club (UKC).

Smith, a former police officer, has also tested and sold K-9s to police departments across the United States. Smith was a handler for the explosive detection and tracking K-9 for Lexington Police.

Now, Smith said she is focusing her efforts on growing Storm Run Farm and Prime K9 Sports with the help of her three daughters and husband.

The pool is currently available for rentals. People can use the rental time to practice dock diving with their dogs or allow their dogs to exercise by swimming laps in the pool.

To rent the pool, people must sign a facility waiver. Their dogs must be up-to-date on vaccines. The cost is $20 for 30 minutes, and people can rent the pool for as long they like. More information on how to rent is available on Prime K9’s website.

Any dog can try out the sport, Smith said. It doesn’t require an enormous amount of training to get started, and it’s one way to strengthen the bond between dog and owner.