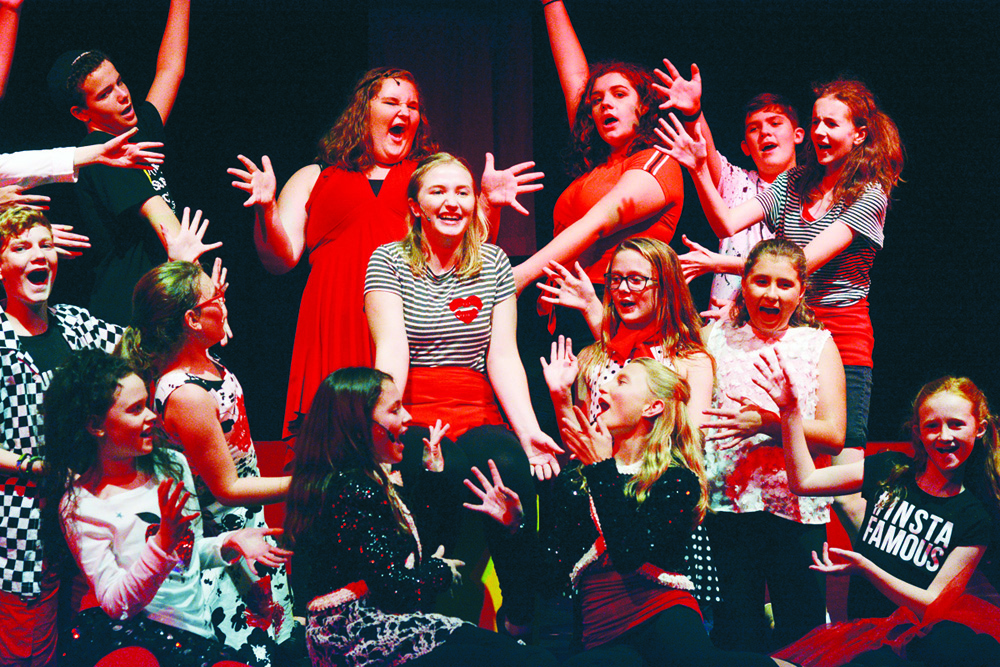 The 38-member cast of "Give My Regards to Broadway" practice its kick line during a rehearsal gearing up for the premiere tonight at 7:30 p.m. The musical revue is a Winchester Players original script pieced together with songs from Broadway.

It’s a musical about musicals with a musical within a musical; it’s “Give My Regards to Broadway.”

The musical revue includes songs from beloved Broadway shows such as “Matilda,” “Something Rotten,” and “Show Boat.”

Kelly Estes said she wanted to produce a musical about musicals for a long time, and the timing finally felt right.

She said the musical revue would be great for both adults and children, and the revue gives insight into the minds of what it’s like to be a “theater kid.”

The 38-member cast ranges in age from 5 to 16, with one adult character who, over the course of the revue, learns all there is to know about musicals.

The cast has been rehearsing since the first week of June.

“We have a great cast,” Estes said. “They have put a lot of hard work into this, and it shows.”

The cast didn’t shy away from the more challenging songs, she said, as some of the Broadway songs in the revue are even challenging to professional actors.

“This musical revue gives them the opportunity to sing challenging songs,” Estes said.

The revue premieres today at 7:30 p.m. in the Robert D. Campbell Junior High School auditorium. There is also a show at 7:30 p.m. Saturday and 2:30 p.m. Sunday. Concessions are available.

Tickets are $12 for adults and $8 for children younger than 13. Estes said the Winchester Players uses all of the proceeds to continue providing a quality community theater program.

Estes said she encourages the public to come out and see the show.