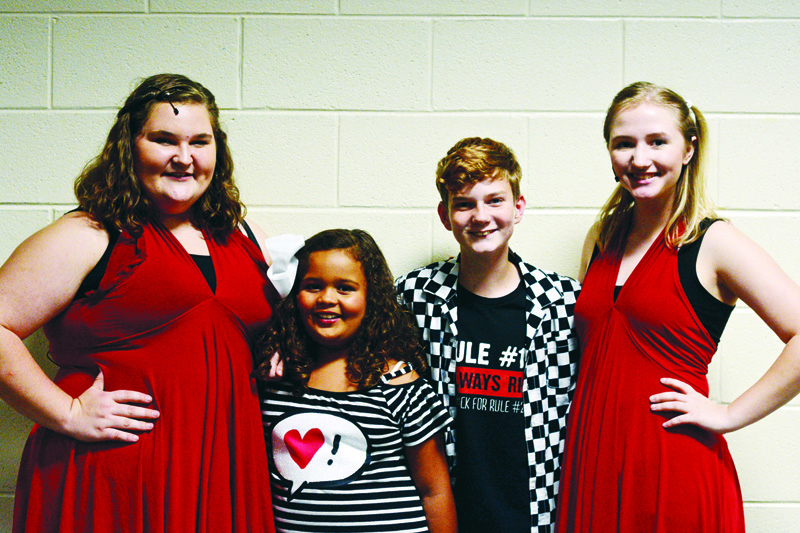 Natalie Shoemaker, left, Aaliyah Daniel, Zach Ross and Charli O'Dell are a few of the many students that work hard to put together productions for the community to enjoy. These students haved worked countless hours to help produce "Give My Regards to Broadway" which premieres tonight at 7:30 p.m. at Robert D. Campbell Junior High School.

The self-proclaimed “theater kids” of Clark County are helping to keep the art form alive and thriving in the community.

These students have performed in local productions for several years and have spent countless hours bringing the beloved characters from our favorite musicals and plays to life.

Some Clark County students are giving more insight into the life and mind of a “theater kid” in their production of “Give My Regards to Broadway” at 7:30 p.m. today in the Robert D. Campbell Junior High School auditorium.

“Most people don’t always understand how much work we put into it, or why we are always tired,” Shoemaker said.

O’Dell said theater is often all they do and all they think about; sometimes, a little too much, she added.

Ross said he had learned about the Winchester Players, a community theater program, when working on a show in elementary school.

Shoemaker said being involved in theater allowed her to build friendships with people she might not have otherwise met. She said it also helped her build confidence and the courage to talk to strangers or people she doesn’t know well.

O’Dell, on the other hand, said theater pushed her out of her comfort zone; she learned more about singing as well as how to be a good leader.

“I’ve never thought of myself as a singer,” she said. “I’ve always been a dancer.”

O’Dell said she only recently pursued theater, starring in her first production about two years ago.

“I have just grown so much,” she said.

Shoemaker said theater has also pushed her to learn more about patience. She encourages people to try theater, even if they have no prior experience.

Ross said he had enjoyed just letting loose on stage. He said he appreciates all aspect of theater; though, dance choreography can be challenging.

“But when we get it together on stage, it’s lit,” he said.

While only Daniel said she wanted to act professionally, each said they plan to be involved in community theater throughout their adult life. O’Dell said she especially hopes to be involved with the Winchester Players for many years to come, perhaps, as a choreographer.

“I know if I had not joined theater, my life would not be at a good place right now,” O’Dell said.

Daniel said she hopes people come out to support all of the students who have worked hard to put on productions all throughout the community.

“We’ve put a lot of hard work into this,” she said.